For Dr. Gabe Charbonneau, a primary care doctor in Stevensville, Montana, the coronavirus pandemic is an existential threat.

Charbonneau, 43, his two partners and 10 staff members are struggling to keep their rural practice alive. Patient volume is slowly returning to pre-COVID levels. But the large Seattle-area company that owns his practice is reassessing its operations as it adjusts to the new reality in health care.

Charbonneau has been given until September to demonstrate that his practice, Lifespan Family Medicine, is financially viable — or face possible sale or closure.

“We think we’re going to be OK,” said Charbonneau. “But it’s stressful and pushes us to cut costs and bring in more revenue. If the virus surges in the fall … well, that will significantly add to the challenge.”

Like other businesses around the country, many doctors were forced to close their offices — or at least see only emergency cases — when the pandemic struck. That led to sharp revenue losses, layoffs and pay cuts.

Dr. Kevin Anderson’s primary care practice in Cadillac, Michigan, is also scrambling. The practice — like others — shifted in March to seeing many patients via telemedicine but still saw a dramatic drop in patients and revenue. Anderson, 49, and his five partners are back to about 80% of the volume of patients they had before the pandemic. But to enhance their chances of survival, they plan to overhaul the way the practice gets paid by Medicare.

Jodi Faustlin, CEO of the for-profit Center for Primary Care in Evans, Georgia, manages 37 doctors at eight family medicine practices in the state. She’s confident all eight will emerge from the pandemic intact. But that is more likely, she said, if the company shifts from getting paid piecemeal for every service to a per-patient, per-month reimbursement.

One of those 37 doctors is Jacqueline Fincher, the president of the American College of Physicians. Fincher said the pandemic “has laid bare the flaws in primary care” and the “misguided allocation of money and resources” in the U.S. health care system.

“It’s nuts how we get paid,” said Fincher, whose practice is in Thomson, Georgia. “It doesn’t serve patients well, and it doesn’t work for doctors either — ever, let alone in a pandemic.”

Physicians and health policy experts say the pandemic is accelerating efforts to restructure primary care — which accounts for about half the nation’s doctor visits every year — and put it on a firmer financial footing.

The efforts also aim to address long-festering problems: a predicted widespread shortage of primary care doctors in the next decade, a rising level of physician burnout and a long-recognized underinvestment in primary care overall.

No data yet exist on how many of the nation’s primary care doctors have closed up shop permanently, hastened retirement or planned other moves following the COVID-19 outbreak. An analysis by the American Academy of Family Physicians in late April forecast furloughs, layoffs and reduced hours that translated to 58,000 fewer primary care doctors, and as many as 725,000 fewer nurses and other staff in their offices, by July if the pandemic’s impact continued. In 2018, the U.S. had about 223,000 primary care doctors. 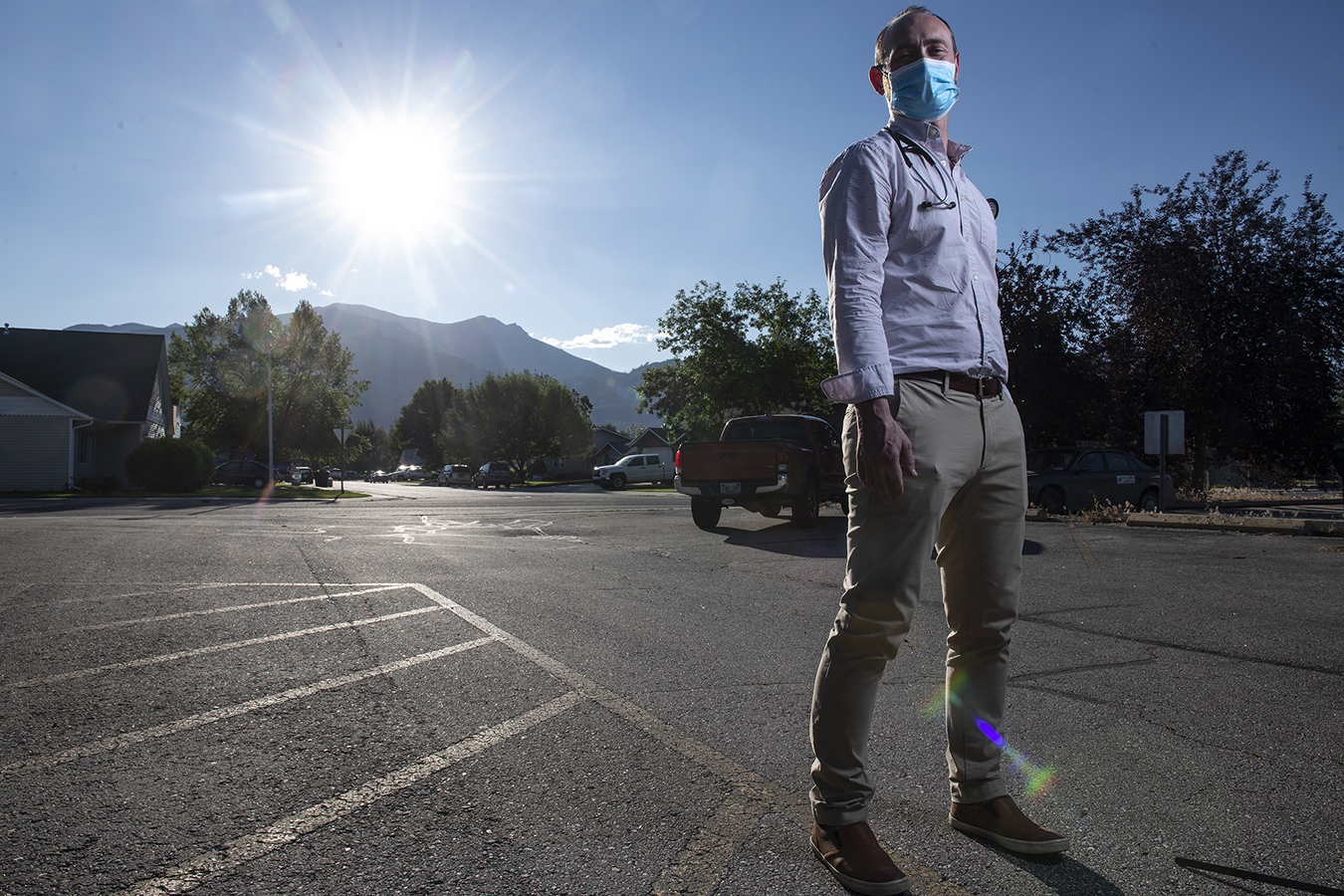 “We think we’re going to be OK,” says Dr. Gabe Charbonneau, a primary care doctor in Stevensville, Montana. “But it’s stressful and pushes us to cut costs and bring in more revenue. If the virus surges in the fall … well, that will significantly add to the challenge.”(Tommy Martino for KHN)

“The majority [of primary care doctors] are hanging in there, so we haven’t yet seen the scope of closures we forecast,” said Jack Westfall, a researcher at the academy. “But the situation is still precarious, with many doctors struggling to make ends meet. We’re also hearing more anecdotal stories about older doctors retiring and others looking to sell their practices.”

Three-quarters of the more than 500 doctors contacted in an online survey by McKinsey & Co. said they expected their practices would not make a profit in 2020.

A study in the journal Health Affairs, published in June, put a hard number on that. It estimated that primary care practices would lose an average of $68,000, or 13%, in gross revenues per full-time physician in 2020. That works out to a loss of about $15 billion nationwide.

One main problem, said Westfall, is that payment for telehealth and virtual visits is still inadequate, and telehealth is not available to everyone.

The remedy being most widely promoted is to change the way doctors are reimbursed — away from the predominant system today, under which doctors are paid a fee for every service they provide (commonly called “fee-for-service”).

Health economists and patient advocates have long advocated such a transition — primarily to eliminate or at least greatly reduce the incentive to provide excessive and unneeded care and promote better management of people with chronic conditions. Stabilizing doctors’ incomes was previously a secondary goal.

Achieving this transition has been slow for many reasons, not the least of which is that some early experiments ended up paying doctors too little to sustain their businesses or improve patient care.

Instead, over the past decade doctors have sought safety in larger groups or ownership of their practices by large hospitals and health systems or other entities, including private equity firms.

A 2018 survey of 8,700 doctors by the Physicians Foundation, a nonprofit advocacy and research group, found, for example, that only 31% of doctors owned or co-owned their practice, down from 48.5% in 2012.

Fincher, the American College of Physicians president, predicts the pandemic will propel more primary care doctors to consolidate and be managed collectively. “More and more know they can’t make it on their own,” she said.

It’s nuts how we get paid. It doesn’t serve patients well, and it doesn’t work for doctors either — ever, let alone in a pandemic.

A 2018 survey by the American Medical Association found that, on average, 70% of doctor’s office revenue that year came from fee-for-service, with the rest from per-member, per-month payments and other methods.

The pandemic has renewed the push to get rid of fee-for-service — in large part because it has underscored that doctors don’t get paid at all when they can’t see patients and bill piecemeal for care.

However, he’s not sure the company that owns his practice, Providence Health System — which operates 1,100 clinics and doctors’ practices in the West — is committed to moving in that direction.

Anderson, in Michigan, is embracing a new payment model being launched next year under Medicare called Primary Care First. He’ll get a fixed monthly payment for each of his Medicare patients and be rewarded with extra revenue if he meets health goals for them and penalized if he doesn’t.

Medicare’s Primary Care First program is a main vehicle in that effort. It will launch in 26 areas in January. Doctors will get a fixed per-patient monthly fee along with flat fees for each patient visit. A performance-based adjustment will allow for bonuses up to 50% when doctors hit certain quality markers, such as blood pressure and blood sugar control and colorectal cancer screening, in a majority of patients.

But doctors also face penalties up to 10% if they don’t meet those and other standards.

Some private insurers are also leveraging the pandemic to enhance payment reform. Blue Cross and Blue Shield of North Carolina, for example, is offering financial incentives starting in September to primary care practices that commit to a shift away from fee-for-service. Independent Health, an insurer in New York state, is giving primary care practices per-patient fixed payments during the pandemic to bolster cash flow.

“Primary care docs would have been better off during the pandemic if they had been getting fixed payments per month,” said Dr. T. Larry Blosser, the medical director for outpatient services for the Central Ohio firm.