But the legislation may do no such thing, according to health law experts who have read it closely.

Built into the bill are loopholes for states to bypass those protections and erode coverage for preexisting conditions. That could lead to perverse situations in which insurers are required to cover chronically ill people but not the diseases they suffer from.

Depending on what states and governors do, plans sold to individuals might exclude coverage for prescription drugs, mental health, addiction and other expensive benefits, lawyers said. Maternity coverage might also be dropped.

Somebody with cancer might be able to buy insurance but find it doesn’t cover expensive chemotherapy. A plan might pay for opioids to control pain but not recovery if a patient became addicted. People planning families might find it hard to get childbirth coverage.

“The protection your insurance provides could depend a lot on where you live,” said Sabrina Corlette, a research professor at Georgetown University’s Health Policy Institute. In some states, “over time, [patients with chronic illness] might find it increasingly difficult to find insurance companies that will offer plans that cover their needs.”

The Senate provisions aren’t expected to affect job-based health plans or Medicare for seniors. They would mainly affect the kind of insurance sold to individuals through the Affordable Care Act’s online exchanges, which cover about 10 million people.

Obamacare overhauls in both the House and Senate would also limit spending on Medicaid for low-income people, which analysts say would cause coverage losses for millions.

The Senate legislation, expected to be voted on next week, follows a widely criticized House bill that would also overhaul the Affordable Care Act, in its case giving states the option of denying coverage or raising premiums for those with preexisting illness.

On Thursday Republican Senators touted their bill as avoiding those features.

“I feel comfortable that no one is going to be denied coverage because they’ve been sick before,” said Sen. Lindsey Graham (R-S.C.) The bill “doesn’t change [protections for] preexisting illnesses, which is good,” he said.

Not explicitly. But it still gives insurers a potential way to shrink coverage for the chronically ill, albeit less obviously, said health law scholars.

“There’s nothing in the Senate bill that specifically would allow withdrawal of coverage for a person with a preexisting condition,” said Timothy Jost, emeritus law professor at Washington and Lee University in Virginia and an expert on health reform. “What it does do is allow states to get waivers” allowing exceptions to rules requiring comprehensive coverage, he said.

Both the Republican House bill and the Senate bill would let states change that rule. Under those measures, states could set their own standards that might not be as generous, allowing insurers to exclude benefits for those with preexisting illness. 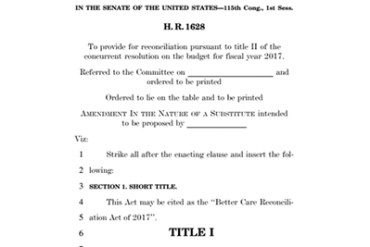 “The Senate bill guarantees people with preexisting conditions access to insurance at the same rate as healthy people, but there is not a guarantee that the benefits they need will be covered by insurance,” said Larry Levitt, a senior vice president at the Kaiser Family Foundation. (Kaiser Health News is an editorially independent program of the foundation.)

Obamacare, too, allows states to make exceptions for essential health benefits — but with strict limits. Coverage must be at least as comprehensive as the federal standard, for one thing. The Senate bill contains no such safeguard.

“As long as they can show that it’s budget neutral, states would have a lot of latitude” to cut essential benefits, said Christopher Koller, president of the Milbank Memorial Fund and a former Rhode Island insurance commissioner.

Insurance plans for individuals might again start to look as they did in the days before Obamacare, when they typically excluded coverage for maternity, mental health and substance abuse, health policy experts said.

That’s especially true because the Senate bill would allow governors to lower coverage standards by executive certification — without approval from legislatures, Corlette said. The measure would also permit governors to raise or eliminate Obamacare’s caps on what patients pay annually out of pocket before insurance kicks in. That could make care for preexisting conditions unaffordable even if it’s covered by the plan.

For their part, insurers may heavily pressure states to make such changes, analysts said.

Unlike the Affordable Care Act and the House bill, the Senate bill contains no incentives or inducements for healthy people to maintain medical coverage. That could result in a disproportionately sick group of people buying individual insurance, driving up carriers’ costs and prompting them to seek ways to trim coverage and cut claims.

“If the only people motivated to buy insurance are going to be the ones who really need it, insurers are really going to have a strong incentive to use their benefit design to deter enrollment for the sickest people,” said Corlette.