Fewer men over age 75 are being routinely screened for cancer with a prostate-specific antigen (PSA) test following a 2008 recommendation against the tests, researchers said today, suggesting a less-is-more approach sometimes works.

But while the numbers have declined, they remain significant – more than 4 in 10 men in that group still get the tests. 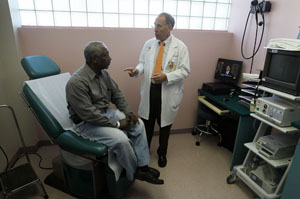 When a prestigious government panel recommended in August 2008 that men over age 75 should not be routinely screened for prostate cancer, it kicked off controversy as well as speculation that some doctors and patients would not heed the warning  the tests led to more harm than good.

“There’s a lot of skepticism in the medical community that guidelines don’t work, especially when the guidelines recommend less care,” said David Howard, an associate professor of health policy at Emory University and one of the authors of the study published in Health Affairs today.

Howard and researchers from the Centers for Disease Control and Prevention studied what happened to screening rates after the recommendation from the U.S. Preventive Services Task Force.  The task force said the testing – and resulting biopsies, surgeries and other treatment – was more likely to cause medical harm than to save lives.

Before the recommendation, 47 percent of men over 75 had a PSA test. By 2010, that percentage dropped to 42 percent, according to Medicare data. That occurred without any change in payment policy by Medicare, which continues to cover the PSA tests.

Howard said the results should prompt optimism about similar efforts to slow the use of unnecessary or harmful tests, procedures or drugs.

Last year, the task force expanded its recommendation against routine PSA screening to encompass men of any age who have no symptoms of prostate cancer.

Such testing can lead to other more invasive procedures, including surgeries, which carry serious risks, including incontinence and impotence.

“Many men are harmed as a result of prostate cancer screening and few, if any, benefit,” the task force said, prompting sharp disagreement from some urologists and other doctors, who say routine screening helps them find cases of cancer that should be treated.

In men under age 75, Howard’s study found an uptick in the percentage screened.  In 2007 – before the guidelines – 49.5 percent of men age 65 to 74 had a PSA test. By 2010, that percentage had risen to 51.5, which Howard described as statistically significant. Howard said the researchers could not pinpoint what led to that increase in the younger age group.

“There are still a lot of men who receive a PSA test,” Howard said. “But if you buy the preventive services task force rationale, which not everyone does, then the simple issuance of a recommendation moved screening rates in the right direction.”

Prostate Screening Tests In Older Men Decline, But Many Still Get Them, Study Finds