For nearly a quarter century, doctors have ordered annual PSA tests for men of a certain age to screen for prostate cancer, despite a lack of evidence that the benefits outweighed the risks — especially when tiny, slow-growing tumors were detected. 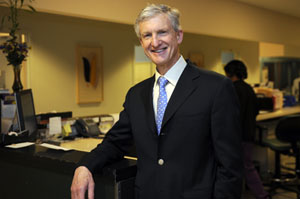 But the landscape appears to be changing. While questions about PSA screening remain, physicians increasingly recognize the need to discuss both the harms and benefits with patients.

The U.S. Preventive Services Task Force shook up the status quo last July when it advised against using the simple blood test, which measures levels of a protein called prostate specific antigen, with average-risk men of any age who had no prostate cancer symptoms. That recommendation prompted a backlash from urologists, who argued that screening saves lives, but gave pause to primary care doctors.

“I would say it’s a shift toward a more targeted screening approach rather than a one-size-fits-all screening approach,” said Dr. H. Ballentine Carter, a Johns Hopkins urologist, of the American Urological Association guidelines released May 3 and developed by a committee he chaired. The international association has more than 19,000 members worldwide.

Carter’s committee noted that the greatest benefit appears to be for those 55 to 69 but urged that men in that age group discuss the pros and cons with their doctor before deciding whether to proceed. For those who opt for screening, waiting at least two years between tests could minimize potential harms — namely false-positives and the detection of slow-growing tumors that wouldn’t have caused any symptoms — while preserving most benefits.

Both groups agreed that doctors should not screen men younger or older than their guidelines’ age ranges or those expected to live less than 10 to 15 years because of other health conditions.

An elevated PSA level doesn’t necessarily signify prostate cancer, but it can trigger a cascade of tests and treatments that could be riskier than the disease itself, potentially causing impotence, incontinence or even death from prostate cancer surgery.

Even before the latest sets of guidelines were released, Dr. Michael Albert, a Hopkins internist, said he began to change his approach, spurred by the Preventive Services Task Force recommendations and a 2009 U.S. study that concluded PSA screening didn’t save lives. “It used to be much easier for me to click on the PSA button and order it,” said Albert, medical director of the East Baltimore Medical Center, part of Johns Hopkins Community Physicians.

Dr. Gene Green, a board-certified family practice doctor and internist who is president of the Hopkins-affiliated Suburban Hospital in Bethesda, said he’s been screening a smaller percentage of patients and referring fewer of them with a PSA level of 4 — traditionally the point at which prostate cancer concerns are raised in older men — to urologists.

Carter, head of adult urology at Hopkins, said the AUA guidelines “had absolutely nothing to do with the task force,” and though the two groups’ guidelines were based on similar scientific evidence, they viewed the evidence differently.

“We interpreted the evidence from an individual’s perspective vs. a public health perspective,” he said. Prostate cancer might not represent a threat to the public health the way diabetes or heart disease does, but it’s a “major risk to an individual who’s in your office and who may be very concerned about the possibility,” Carter said.

Dr. Kenny Lin, a family physician, called the informed-consent approach a “cop-out.” Simply by raising the subject of screening, doctors push patients toward it, said Lin, who as a medical officer at the Agency for Healthcare Research and Quality wrote the evidence review on which the Preventive Services Task Force based its recommendation. So, said Lin, now on the faculty at the Georgetown University School of Medicine, “I don’t bring it up necessarily.”

Meanwhile, the American Association of Clinical Urologists, whose website said its membership includes 45 percent of U.S. urologists, warns in a statement that these recent sets of guidelines could leave the impression that early detection of prostate cancer is no longer needed.

The Preventive Services Task Force and the AUA committee agree that one life is saved for every 1,000 men screened.

The death rate from the disease has been declining since it peaked 20 years ago, although it isn’t clear how much is due to PSA screening and how much to improved treatment. Still, Nelson acknowledged, “a lot more men die with prostate cancer than will ever die of it. The greatest threat to their health and happiness is attempts to treat them.”

Since the 1990s, screening has led to a diagnosis of early-stage prostate cancer in more than a million U.S. men who probably never would have developed symptoms. More than nine out of 10 of them chose aggressive treatment.

Mark Humphrey, now 71, a retired General Electric executive, lived in western Massachusetts when a 2006 test showed his PSA had nearly doubled to 3.5. Although still in the normal range below 4, the rapid increase spurred his doctor to refer him to a urologist for a biopsy, which revealed abnormal cells.

But his cancer appeared unlikely to be aggressive. That information, coupled with memories of his late brother-in-law’s experience with incontinence and impotence after surgery, led Humphrey to take a pass on the aggressive approach.

So Humphrey, who now lives in Baltimore, enrolled in the world’s first prostate cancer “active surveillance program,” which Carter directs at Hopkins. Instead of treating Humphrey’s disease, Carter is keeping an eye on it, with PSA testing and a rectal exam every six months.

Approximately 1,000 men have opted for active surveillance since the program launched more than 16 years ago. By following the participants, Carter said, he and his colleagues hope to learn more about what distinguishes slow-growing from aggressive cancers. Their goal: to build a better screening test.

“And then we want to learn more about the personal preferences of patients,” Carter said. For example, are they comfortable living with cancer?

Albert remembers seeing one patient, an otherwise healthy man in his early 60s with a PSA-detected tumor. After six months in the program, the man chose surgery. “He couldn’t fathom the idea that you’d sit on a cancer that could metastasize.”

Carter, Nelson and Green are among a group of Hopkins urologists and primary care doctors working on an app to help doctors discuss the risks and benefits of PSA screening with patients. The app, to be tested later this year, takes into account such factors as life expectancy and prior PSA levels. It will be integrated into patients’ electronic medical records.

Notes Green: “Very few times in our lives can we say ‘always’ or ‘never.'”

PSA Screening: New Round Of Guidelines Emphasizes Importance Of Weighing Harms And Benefits