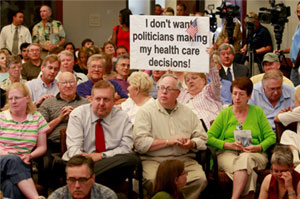 Last year’s town hall meetings held by politicians ignited both support and protests. Now, Democrats’ health overhaul legislation is faltering for many reasons, including some policy decisions that experts say led Americans to wonder whether they would wind up worse off. (Scott Olson/Getty Images)

As a candidate, Barack Obama promised to pass a health plan with important benefits for the average American. For the typical family, costs would go down by as much as $2,500 a year. Adults wouldn’t be required to buy insurance. No one but the wealthy would face higher taxes.

But a year later, the health care proposals in Congress lack many of those easy-to-sell benefits, which became victims of the lengthy process of trying to win over wavering lawmakers, appeasing powerful special-interest groups and addressing concerns about the heavily burdened Treasury.

“There’s nothing in it the average person could understand about why your costs would be lower,” says Robert Blendon, professor of health policy at Harvard’s School of Public Health. “They don’t even have good illustrations about how it would be cheaper. They did not find a way to save money for people with job-based insurance.”

Today, health care legislation is in serious trouble, lacking a critical 60th vote in the Senate following the election of Republican Scott Brown to the Massachusetts seat held by the late Edward Kennedy.

Certainly, relentless attacks by the Republicans  as well as the Democrats’ own inability to clearly articulate the benefits of the legislation  are partly responsible for the legislation’s lack of popularity. So are crucial policy decisions made by Democratic leaders as they struggled to push the legislation through Congress, according to experts of different ideological persuasions.

“Health reform is a really hard thing to do,” says Jonathan Oberlander, associate professor of social medicine at the University of North Carolina-Chapel Hill. “They did a lot right, strategically. But you can do everything right and still fail in health reform.”

Here are some of the policy choices that experts say have hurt the bill’s chances:

What’s In It For Me?

For the majority of voters who get insurance through their employers, the downsides of the overhaul have became increasingly tangible while the promised benefits  among them lower costs  have seemed increasingly nebulous. One reason: Democrats didn’t want to be so tough on health care providers that they would fight the legislation.

“The Democrats succeeded in doing reform without goring anyone’s ox and the public has seen that for what it is: They are not substantially bringing costs down in the foreseeable time horizon,” says Joel Cantor, director of the Rutgers University Center for State Health Policy in New Brunswick, N.J.

To be sure, the Senate Democrats crafted a “Cadillac tax” on the highest-cost insurance plans for people with employer coverage. That step was deemed necessary to help slow the growth of health-care costs and to help finance the plan. But it means some people with coverage could end up worse off under the overhaul. And the recent deal between the White House and union leaders to soften the impact of the tax came only after months of criticism from organized labor and created its own political problems.

Lawmakers incorporated tax credits to help small businesses afford coverage, but most of the bills’ provisions are targeted at the more than 30 million Americans lacking coverage and the 17 million people who buy insurance in the individual market. The bills would bar insurers from rejecting individuals with health problems and would guarantee that policies couldn’t be cancelled if enrollees got sick. But such promises seem hypothetical for many people who already have jobs and insurance  the very constituency the Democrats need to succeed.

“The most powerful force in American health care, politically, is people with employer-based health insurance and (who) actually have pretty good insurance,” says James Capretta, a fellow at the Ethics and Public Policy Center, a conservative think tank.

The Democrats finance a big chunk of the bill by slowing the growth of Medicare spending  which is probably inevitable, given the sheer size of the program.

But in doing so, they have opened themselves up to charges by Republicans and others that seniors would pay the price. Democrats and AARP, the powerful seniors’ lobby, argue that the legislation wouldn’t hurt older Americans and in fact would help them by lowering costs for prescription drugs and making other improvements. They also say that payment cuts to private Medicare Advantage plans are good policy because the plans cost more than traditional Medicare.

Certainly, there are no easy ways to finance such a massive revamping of the system. “The choices are to take it out of existing health programs, increase taxes, or reduce other spending,” says Gail Wilensky, who ran Medicare and Medicaid under President George H.W. Bush and is now a senior fellow at Project HOPE, an international health education foundation. “Those are three really unattractive options.”

But the Medicare reductions have become easy targets for attack ads aired by opponents such as the 60 Plus Association, a conservative advocacy group, and America’s Health Insurance Plans, the industry’s major trade group.

The Medicare reductions “made it easy to scare seniors” and are “responsible in significant measure for the opposition” to the bill, says Oberlander.

Joseph Antos of the American Enterprise Institute, a conservative think tank, says the public doesn’t buy the theory “that if you take a lot of money out of a program, nothing changes.”

The discussion of various taxes has confused and alarmed people, experts say.

Many of the taxes have been dropped or scaled back. Others have been designed to pressure the health care system to operate more efficiently. But the laundry list of levies has fueled concerns that Americans, struggling with the severest economic slump in decades, would have to pony up more for the tax man.

“The final bill will not have all those taxes in it,” says Blendon, “but people hear about the tax on insurers, the tax on pharmaceuticals, the income tax  and they can’t segregate it in their minds.” Opposition to taxes was a key part of Brown’s campaign.

“People don’t like taxes,” says Leslie Norwalk, who was acting director of the Centers for Medicare and Medicaid during the administration of President George W. Bush. “The electorate is trying to decide what it thinks about this health care stuff, sees the economy is in trouble and a lot of discussion about taxes, but isn’t all that unhappy about their own healthcare. Weighing those two things can be difficult.”

Putting together complicated legislation is always messy, but the health care debate has been especially prone to distractions, setbacks, reversals and deal-making. For months, Senate Democratic leaders searched for a compromise that would bring at least one Republican on board while trying not to lose liberal Democrats who threatened to withhold support. The fight over a government-run insurance plan, known as “the public option,” took so much time and energy that other issues were eclipsed. The fracas over “death panels” during the August recess fueled a revolt against the legislation. Abortion emerged as a potent issue that nearly derailed the legislation.

“The longer the clock’s running, the bigger the chance you have for something to pop up and surprise you,” says Peter Harbage, a Democratic health policy consultant.

Negotiators cut parochial deals for individual lawmakers-extra Medicaid spending for Nebraska, exemptions from Medicare Advantage cuts for parts of Florida, special help for some Montana residents suffering from asbestos disease. All this helped secure the 60 votes to get the bill through the Senate, but it bolstered the perception that the measure was pork barrel spending aimed at helping some more than others. “They say, ‘Look, God knows what other dirty deals they did,'” says Uwe Reinhardt, a health economics professor at Princeton University.

Overall, the legislation’s sheer complexity “left people disenchanted,” Cantor says. “The problem seems simple: Costs are too high and there are too many uninsured. But the solution is enormously complicated and takes too long to get to the point and people have become disengaged with the process and all the conflict evident in the process.”