VIEQUES, Puerto Rico — As the cry of a rooster heralded the dawn, Joe Garcia, 41, pulled a vial of insulin from the fridge. He filled a syringe and wrapped it in aluminum foil in preparation for the long day ahead.

“I tell him that from here to there, that’ll spoil,” said his mother, Martina Collazo de Jesus, 63, watching the preparations under the fluorescent bulb lighting the family kitchen.

It is a gamble Garcia, who has both diabetes and kidney failure, has taken since Hurricane Maria slammed this Puerto Rican island just east of the main island. More than six months after the storm, Garcia and 13 other Vieques residents must still board a plane three days a week for kidney dialysis on Puerto Rico’s main island. 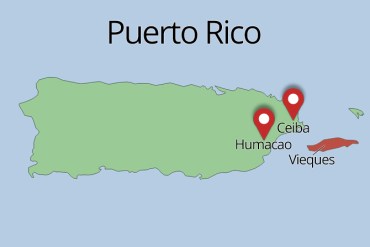 That set off an ongoing crisis for patients with kidney failure such as Garcia — who cannot survive without dialysis and for whom the thrice-weekly round trip to a dialysis center in Humacao on Puerto Rico’s main island, including treatment, takes at least 12 hours.

When seriously ill patients like Garcia will again be able to access their lifesaving treatments in Vieques remains uncertain, as federal, local officials and nonprofit groups debate strategy and finances. No one knows when the hospital will be rebuilt, either. And the government and nonprofit organizations continue to punt the responsibility of paying for the flights.

“This is really hard,” Garcia said, as he prepared for his long day of treatment. “I am crazy, crazy, crazy for them to build a clinic here in Vieques.” 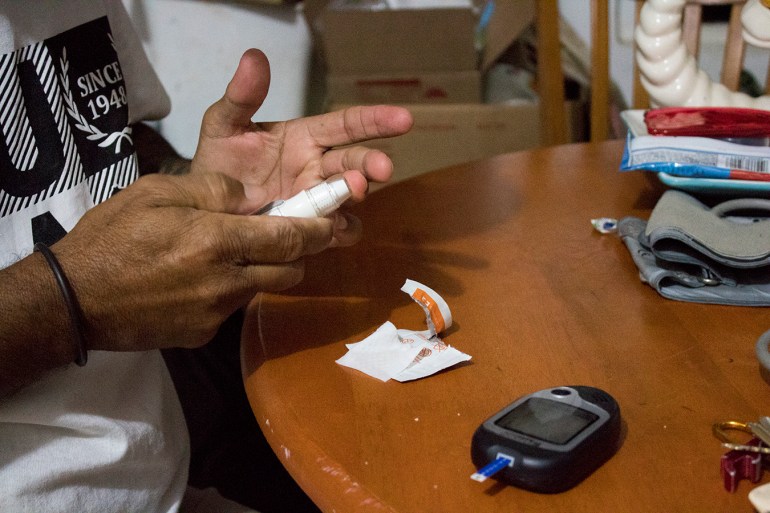 Garcia pricks his finger to test his glucose. Poor eating habits and a lifestyle of drinking led Garcia’s diabetes to spiral out of control, resulting in kidney failure. (Carmen Heredia Rodriguez/KHN) 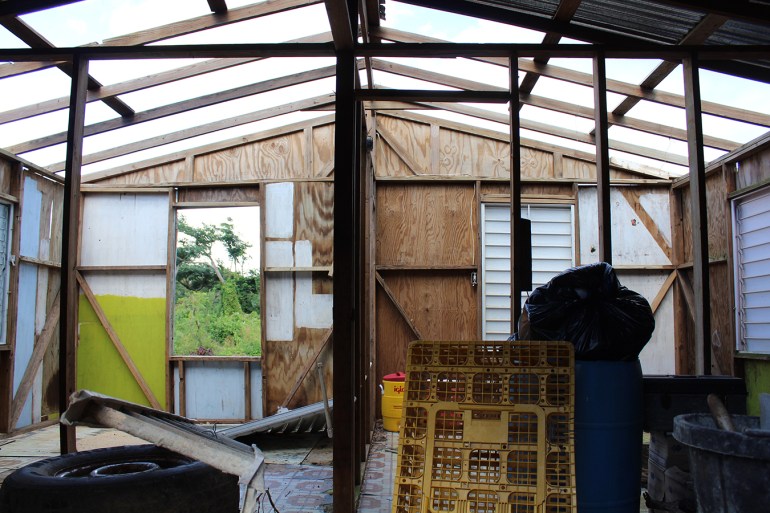 Next door to Martina Collazo de Jesus’ home, Garcia’s house lies in ruins. Hurricane Maria blew off the roof and tossed around appliances. Since then, Garcia has managed to reattach metal siding on the frame. (Carmen Heredia Rodriguez/KHN)

Who Plans, Who Pays?

Before Maria, Vieques, a sleepy island with about 9,300 people and miles of popular beaches along the Caribbean, once was home to a thriving tourism industry.

Since that September storm, residents have relied on generators for electricity, and tarps still serve as roofs for many houses.

The hurricane ravaged Garcia’s home. It tossed the appliances and ripped the metal sheets off, leaving only the wood frame standing. He now lives next door with his mother. The tattoos on his left arm bear her nickname, Tati, alongside the names of his sister and daughter. 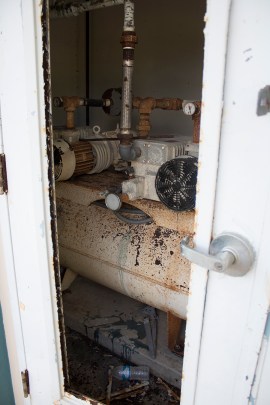 Before Garcia received the diagnosis of kidney failure 2½ years ago, he worked odd jobs, including as a handyman at a hotel and a manager in a car rental business.

With the hospital condemned due to storm damage, most medical services were transferred to a tented facility nearby. But dialysis cannot be performed in that setting, since the machines that filter impurities from patients’ blood require a steady source of power and clean water.

Puerto Rico’s health secretary, Dr. Rafael Rodríguez-Mercado, said in an interview last month in Washington, D.C., that the department is moving to bring in mobile dialysis units that should arrive within four to six weeks.

“I think this issue is a question of waiting for things to arrive, ‘go with the flow,’ and begin doing them,” said Rodríguez-Mercado.

He also said the government is searching for buildings suitable to house temporary dialysis services in Vieques.

But three weeks later, patients are still taking flights. Luis Emanuelli, regional vice president of the national dialysis provider Fresenius Kidney Care, said he is aware of the plans for mobile dialysis clinics but is unaware of any timeline. Officials with Puerto Rico’s Department of Health and local officials in Vieques did not respond to phone calls seeking information on the status of the dialysis units.

The health secretary and Vieques officials have disagreed about who is responsible for coordinating repairs of the ravaged hospital and its infrastructure — each pointing to the other.

Meanwhile, the Federal Emergency Management Agency is collaborating with the territory’s health department and the federal Department of Health and Human Services “to help identify costs for mobile or temporary units that are eligible reimbursement expenses,” the agency said in an email.

It said officials hope to reconstruct buildings that “meet the needs of the community with resiliency for future disasters.”

But the email added that “no long-term solution has been identified yet for any reimbursement costs for reconstruction.”

Footing The Bill For Flights

Multiple groups have stepped up to help transport dialysis patients to a working facility. In the months following the hurricane, the responsibility of paying for this transportation has switched regularly between government and nonprofit organizations. These exchanges have at times left patients and the dialysis provider wondering where funds for the next flight would come from.

First, helicopters coordinated by the federal Department of Health and Human Services carried the Vieques residents to the main island for treatment.

In late October, the nonprofit organization ViequesLove began coordinating the flights, ultimately spending $9,000 in airfare, according to its founder.

Then Americares, a nonprofit international relief organization focused on health, began paying, ultimately spending $55,000 on flights. The Puerto Rican health department informed Americares that it would shoulder the travel costs for March.

“The most sustainable solution for patients in need of long-term care is to have the local health system coordinate,” said Donna Porstner, director of media relations for the nonprofit.

But this month, a local nonprofit that specializes in kidney health, the Renal Council of Puerto Rico, has assumed that responsibility. It secured the funding from the foundation Unidos por Puerto Rico, according to the Renal Council’s executive director, Ángela Díaz. She said she expects the money will cover transportation for the next five to six months.

The council also asked for funding to rent a building in Vieques that could be retrofitted into a dialysis clinic. The foundation has not made a final decision on that request because it is waiting for the various government agencies to come up with a plan to re-establish services, Díaz said. 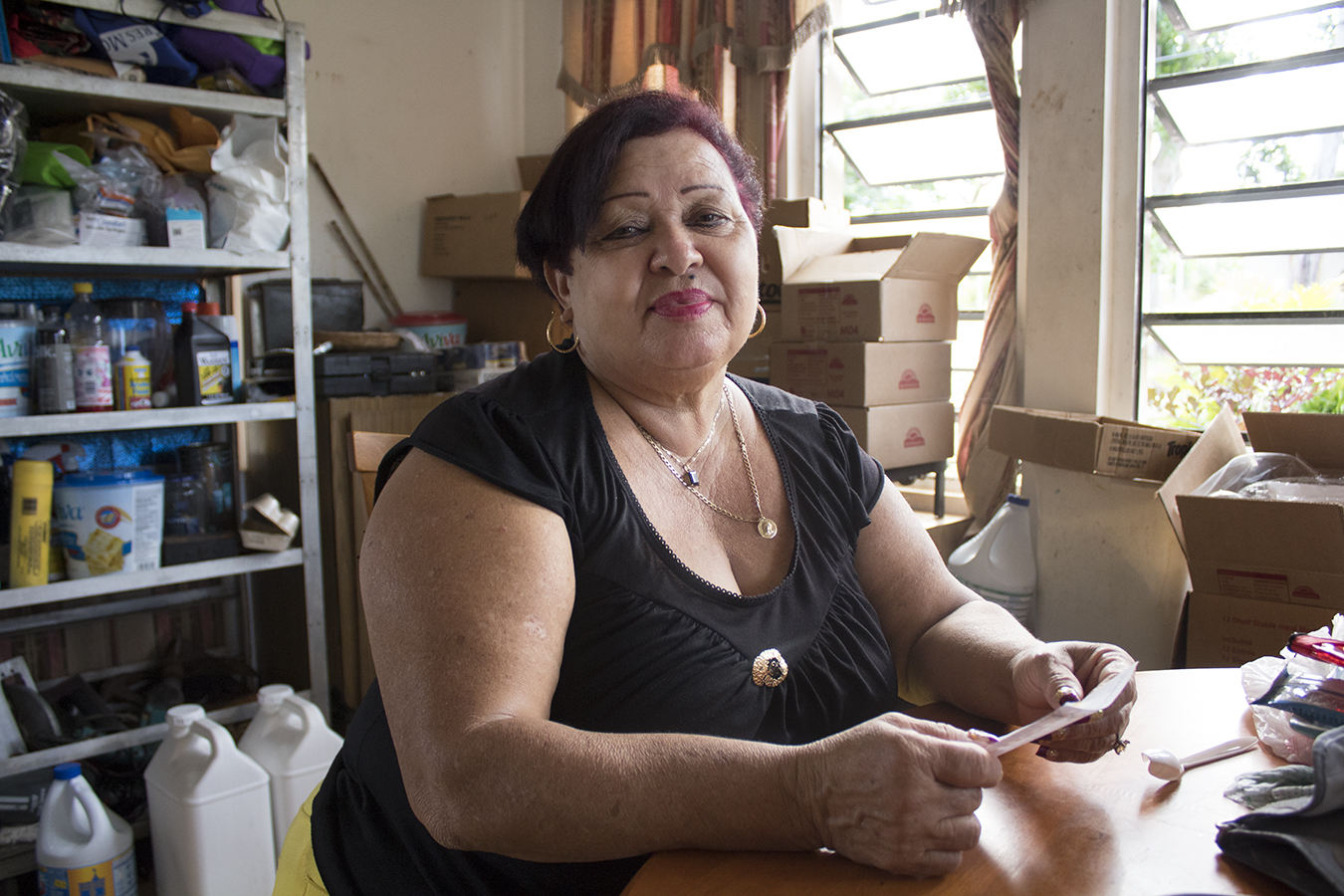 Martina Collazo de Jesus left her job in the hospitality industry to take care of her son, Joe Garcia, when he began dialysis. (Carmen Heredia Rodriguez/KHN)

‘I’m Worried About These Patients’

Eight hours after getting up in Vieques, Garcia dozed in one of the pink reclining chairs lining the walls of the treatment room in Humacao, still only halfway through his four-hour dialysis treatment.

Tubes full of blood snaked from his left arm and funneled into the machine on his right side. The electronic screen showed an assortment of numbers reflecting blood pressure and the amount of dialysis fluid flowing through the filter. The tattoo of his mother’s name on the same arm peeked out beneath the tangle of plastic.

Some patients from Vieques don’t know how much longer they can take the journey for this treatment.

Beside Garcia sat Radamés Cabral Trinidad, 65, who has threatened to stop dialysis to protest the traveling and the lack of effort to provide local treatment. “I want to die,” he said. “I want to die in Vieques.”

José Lorenzo, director of operations of the clinic run by Fresenius Kidney Care, said he sympathizes with the Vieques residents’ call to re-establish the clinic as soon as possible. “I’m worried about these patients,” he said, noting the toll the grueling travel takes on their health.

It would be another four hours before Garcia pulled up to his mother’s home, plopped his bag down and fixed a plate of leftover rice, exhausted. He took off his shirt and checked his blood pressure to make sure they were stable post-travel, post-treatment. 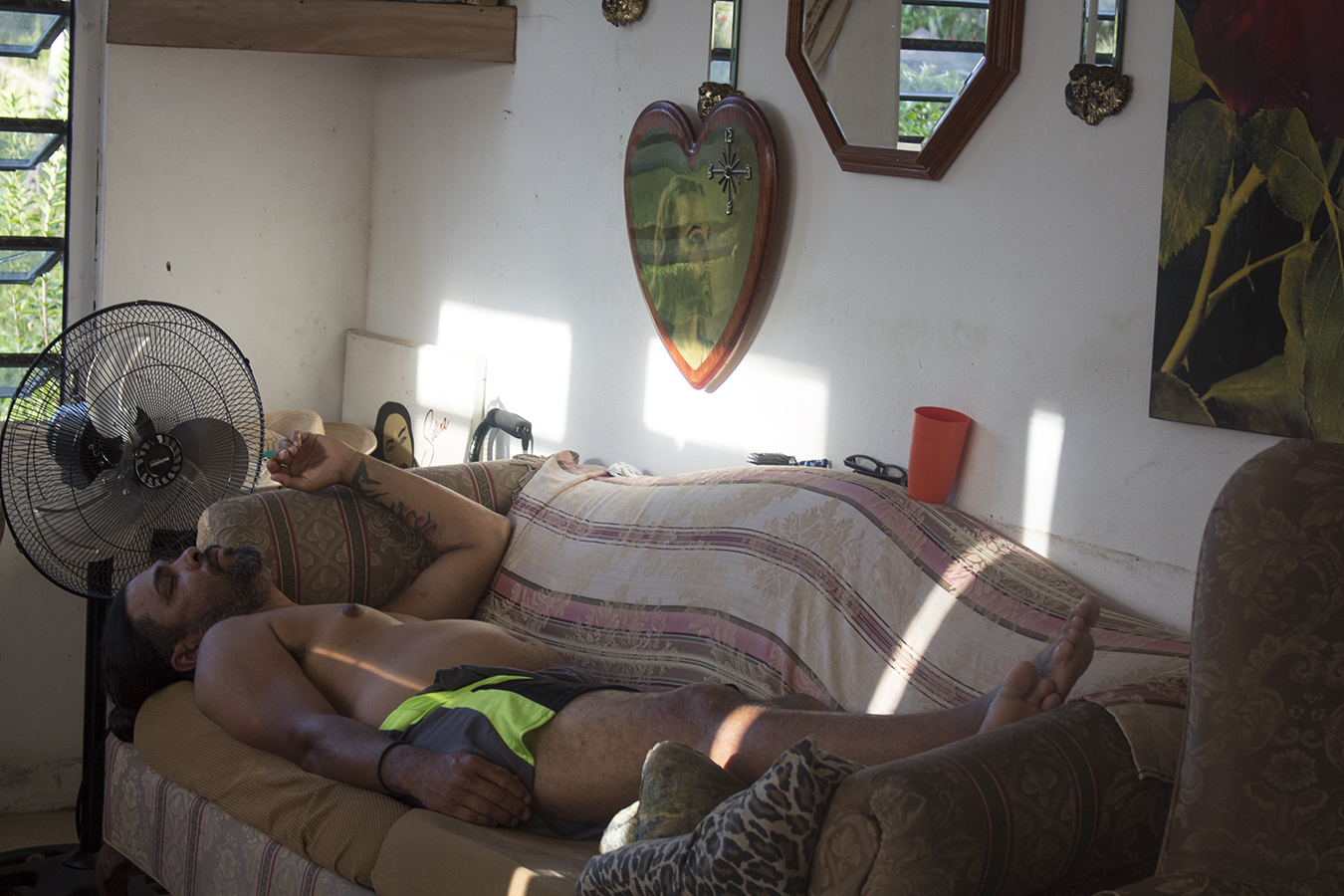 Garcia falls asleep after completing his trip to the dialysis clinic. He will have one day of rest before he travels again the following day for treatment. (Carmen Heredia Rodriguez/KHN)