Prevention advocates, take heart. The $5 billion cut to the health law’s prevention fund included in a House-Senate conference deal on the “doc fix” will be replenished in the years ahead by design as the fund grows, Senate Majority Leader Harry Reid, D-Nev., said Thursday. 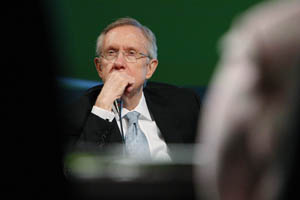 Photo by Center for American Progress Action Fund via Flickr

At a news conference Thursday, Reid said, “We put into law that this fund grows. … This program is going to grow at the rate of about $2 billion a year in the next few years. This is not a loss, overall, for the program. We feel confident this program will be able to go forward. It accumulates money every year.”

Under the legislation that Congress sent to President Barack Obama’s desk Friday, the fund’s growth would be significantly slowed, and supporters say that will hurt its ability to finance programs that would help detect and treat chronic disease, which accounts for 75 percent of the nation’s health spending. The fund, which was created to finance prevention, wellness and public health activities, was supposed to receive $15 billion over the next decade. Obama is expected to sign the bill into law.

“Congress is pulling back from its prior commitment to the common-sense goal of saving lives and money by preventing deadly and costly chronic disease,” said Chris Hansen, president of the American Cancer Society Cancer Action Network (ACS CAN).

That’s billions of lost funding for prevention efforts, advocates say. Even some of the conferees are unhappy about it. “It certainly is not right to reduce our commitment to prevention by robbing the prevention fund of critical dollars that could help us keep people healthy instead of paying for them when they are sick,” said Rep. Henry Waxman, D-Calif.

Sen. Tom Harkin, D-Iowa, who chairs the Senate Health, Education, Labor and Pensions Committee, and has been a champion of the fund, called the prevention cut “an extremely short-sighted and fiscally irresponsible decision.  If we continue down this path, we will never get the cost of health care in this country under control,” he said in a statement.

The fund has had many critics on Capitol Hill. House Republicans voted to repeal it, calling it a “slush fund.” But Obama has eyed it for savings, as well. His budget plan released Monday would slice more than $4 billion from the fund over the next decade, with most of its fiscal 2013 allotment directed to the Centers for Disease Control and Prevention to make up for budget shortfalls there.

Hansen wants the cuts to stop. “We hope the president and Congress will soon recognize that sacrificing disease prevention in the name of budget austerity makes no economic sense and diminishes our ability to improve public health,” he said.

Still, the prevention fund maneuver was attractive to budget negotiators, because it reduced dollars to future programs that don’t exist yet — an easier sell to the public than cutting programs that are already up and running.