Governors and other state leaders have the leverage to slow rising health costs and should not wait for action by the federal government, a commission chaired by two former governors said in a report Wednesday. 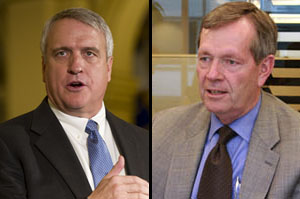 State leaders can use their clout as large purchasers of health care as well as regulators to set goals for health spending and quality, said the report by the State Health Care Cost Containment Commission.

“This must be led by the states,” said former Colorado Gov. Bill Ritter, a Democrat and co-chair of the commission along with former Utah Gov. Michael Leavitt, a Republican. Other commissioners included members representing insurers, hospitals, employers and consumer groups.

Leavitt noted that Utah and Massachusetts — a red state and a blue state, respectively — have each made strides to control costs and create more integrated health care systems.

“They are two very different cultures, but both moved forward long before the federal government,” he said a briefing in Washington, D.C.

Robert Reischauer, another member of the commission, said the group’s recommendations “point in the direction of the types of regulations that will make for a vibrant market.” Reischauer is a Medicare trustee and was director of the Congressional Budget Office from 1989 to 1995.

States that are successful will see their economies grow, wages rise, and health care improve, Reischauer said. “As other states see the differences, they will come along.”

The group was organized by the University of Virginia’s Miller Center and funded by insurer Kaiser Permanente and the Robert Wood Johnson Foundation. (KHN is not affiliated with Kaiser Permanente).

The federal role should be to give states the flexibility to innovate, the commissioners said,.

As an example, Leavitt pointed to a recent decision by the Obama administration allowing Arkansas to move forward with a state-designed Medicaid expansion that allows enrollees to join private health plans. “That signals acceptance by Health and Human Services that the administration is willing to acknowledge states can develop [programs] that reflect their own values,” Leavitt said.

Some of the recommendations endorse additional regulations, such as requiring insurers or medical providers to publicly report prices and quality ratings. Others  include:

Without these type of actions, the country is on the way to spending an estimated $14,000 per person per year on medical care by 2021, up from almost $9,000 today, said Gerald Baliles, director and CEO of the Miller Center and a former Virginia governor.

“While we’ve seen health cost increases slowing, we’ve still hit the tipping point, and it has a huge impact on consumers and state budget,” Baliles said. “Just as states led in clean air and education reform, they are likely to lead in health care reform.”

Report: Effort To Curb Health Costs Should Be ‘Led By The States’