Obamacare’s tenuous toehold in Montana appears to be growing no firmer. Despite a hearing crowded with supporters of the Democratic governor’s Medicaid expansion bill, Republican legislators have dealt the measure a likely death blow.

Republicans control both houses of the Montana legislature, which meets only every other year, and the health law has been controversial. The legislature refused to set up a state-run insurance marketplace before enrollment began and in 2013 it turned down a proposal to expand Medicaid. But statehouse Democrats were hopeful they could ally with enough moderate Republicans to gain a majority of votes in favor of their bill this year. 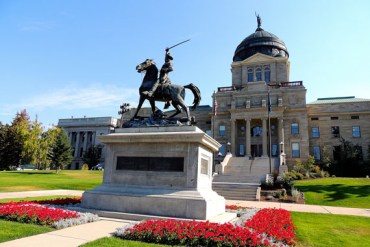 House Republicans, however, refused to advance  the bill  and invoked a rule requiring a three-fifths majority of House members to vote  for the bill to continue to the floor. That threshold is widely regarded as unattainable.

“This is a clear abuse of the power of a committee chairman,” complained House Minority Leader Chuck Hunter, a Democrat from Helena.

But the committee chairman, Rep. Art Wittich, said he and fellow Republican committee members were well within their rights to deny advancing the minority party’s bill.

“We are not a democracy by decibel,” said Wittich, who comes from Bozeman. “The democracy includes how the legislature is made up. There is a Republican majority in each house. We are the majority, and we play by the rules.”

Only a dozen people testified against the bill, including one self-proclaimed Tea Party member and two staffers from Americans for Prosperity, a group funded by the conservative Koch brothers that is campaigning against Medicaid expansion in several states.

Republicans on the committee were unmoved by proponents. They voted as a block to give the bill a “do not pass” recommendation, meaning it dies barring three-fifths of the entire House voting to revive it.

Wittich cited last November’s election outcomes as a mandate from the electorate.

“Most people in Montana do not want to increase government and grow our welfare state,” Wittich said. “So even though there may have been more people that particular night who were bussed in, and who came in, and they were organized, doesn’t dictate the outcome.”

Governor Bullock said Friday’s party-line committee vote, “told Montanans that…members of the legislature value the voices of out-of-state, dark money groups over the voices of thousands of Montanans who spoke out in favor” of his expansion plan.

But, Bullock said, “I’m not done working on this. My door remains open to legislators willing to find real solutions.”

A Great Falls Republican, Sen. Ed Buttrey, is pitching a plan that would extend Medicaid to as many Montanans as Bullock’s bill proposed. The Great Falls Tribune says Buttrey’s bill proposes premiums and co-pays for Medicaid recipients, as well as means testing.

“This is a Republican bill crafted by conservatives,” Buttrey told the Tribune. “There’s more personal responsibility and accountability. Everybody pays.”

Buttrey’s bill is still being drafted, but Bullock has already rejected another Republican Medicaid expansion plan that would cover far fewer people than the 70,000 the governor says need it. That bill, by Sen. Fred Thomas, excludes “able-bodied” adults without dependent children.

“It’s hard to put them in the same boat as somebody that’s disabled, and say we’re gonna give you the same thing that we’re giving to this disabled person,” said Thomas, who represents a largely rural area south of Missoula.

Thomas proposes that childless, non-disabled Montanans who make less than the $11,760 a year required to qualify for Affordable Care Act premium subsidies, “up your hours and do what you can to get above the federal poverty level…. That’s a reasonable solution for that individual.”

This story was updated to clarify the number of speakers at the hearing on Friday.