The consulting firm headed by the man planning Mitt Romney’s White House transition –should there be one — says most states eventually will expand Medicaid under the health law, if President Barack Obama is re-elected. 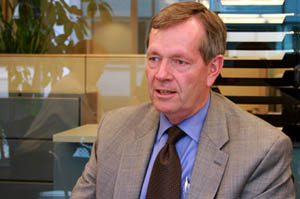 A report completed this week by Leavitt Partners, led by Romney adviser and former Health and Human Services Secretary Mike Leavitt, noted the Obama administration would make expansion enticing for states. The report was commissioned by the state of Idaho, which like many states, is grappling with whether to expand the state-federal health insurance program for the poor.

“If President Obama is re-elected, Leavitt Partners believes the administration will do everything in its power to incentivize states to opt in to the full Medicaid expansion, offering program flexibility as needed,” the report said.

The Supreme Court ruling in June that upheld the health law made the Medicaid expansion optional for states. As a result,  several states are considering not expanding even though the federal government will cover all the costs for the newly eligible for the first three years of the program starting in 2014. States then would start picking up some of the costs, but no more than 10 percent.

To help assess its options, Idaho paid $99,000 to Salt Lake City-based Leavitt Partners to determine the number of residents who would be helped and the cost to the state. Idaho is one of several states that have contracted with the firm for help related to the federal health law, including building new health insurance exchanges. The Idaho Medicaid expansion report is its first completed state study on the subject.

Laura Summers, a director at the firm, said Mike Leavitt’s position in the Romney campaign has not presented any problems in working with states looking for objective analysis on Obama’s health law. “So far, we have not seen it as a conflict in bringing a fact-based unbiased perspective to states,” she said.

While the firm did not say whether the state should expand Medicaid, it recommended that officials wait until after the election to make a decision.

“Because it is almost certain the (Obama) administration will not release detailed guidance before the election, and because there is no deadline for states having to notify HHS of plans to expand, Leavitt Partners recommends that Idaho wait to declare a formal decision until more guidance is released after the November election,” the report said.

The report noted the Obama administration has yet to decide whether it will permit states to do partial expansions, or if it will require them to cover everyone up to 133 percent of the federal poverty level, as called for by the health law. The administration has also not issued final rules on determining what benefits must be provided to newly eligible people on Medicaid.

If Romney wins — a scenario under which Leavitt is expected to get a major role in his administration — the report said Medicaid expansion will be moot.

“If Republicans take both the White House and Congress, Leavitt Partners believes the Administration and Congress will effectively repeal the Medicaid expansion provision through state waivers, or reduce the amount of federal funding made available to states,” the report said. “Under this scenario, the expansion will no longer be an attractive option for most states.”

But if Obama wins, the report said Idaho should be ready to act quickly on expansion.

“If Idaho decides to expand, Leavitt Partners recommends expanding in 2014, which will give the State three years of full federal funding to evaluate overall costs and utilization patterns of the newly eligible.”

Even if the state rejects the Medicaid expansion, the report said Idaho Medicaid enrollment could still increase 5  to 10 percent as a result of mandatory provisions in the federal law that make it easier for people to qualify for the program.

The Idaho Medicaid work group, formed by  Gov. C. L. “Butch” Otter to evaluate Medicaid expansion, is scheduled to discuss the report next Thursday. The task force is expected to issue its recommendations by Nov. 1.