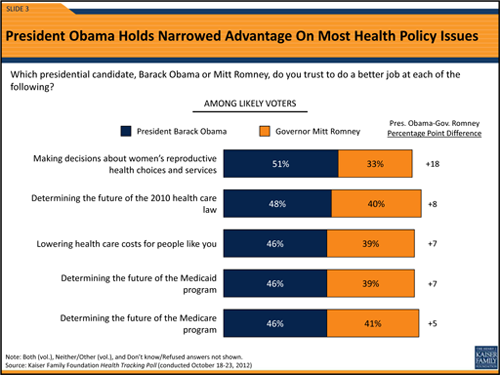 As the race for the White House has tightened, President Barack Obama has seen his advantage on several key health issues narrow significantly among likely voters, according to a Kaiser Family Foundation poll released Wednesday. (KHN is an editorially independent program of the foundation).

Most troublesome for Obama is that, among likely voters, GOP candidate Mitt Romney has pulled nearly even with him on which candidate would do a better job with Medicare — an issue that resonates in battleground states with large elderly populations like Florida and Pennsylvania.  Obama’s advantage on that question has shrunk despite the fact that six in 10 likely voters continue to oppose Romney’s idea of changing Medicare to a premium support system, in which the government would guarantee each senior a fixed amount of money to help them purchase coverage.   Overall, about 46 percent of voters said they prefer Obama on Medicare compared to 41 percent  for Romney, a gap that is not statistically significant. In September, Obama held a 16 point lead on the Medicare question.

Senior voters are even more likely to oppose switching to premium support, but they prefer Romney to Obama on Medicare, 48 percent to 43 percent — also not a statistically significant gap.

While the economy remains voters’ most important issue, the poll found over a third of likely voters polled say the Affordable Care Act and Medicare are “extremely important” to their vote. The law appears to be motivating supporters and opponents of the law about equally.

Obama has also seen his lead among likely voters narrow considerably on questions about Medicaid, lowering health costs and determining the future of the 2010 health care law. On each question, Obama’s lead has narrowed from at least 16 percentage points in September to single digits in October.

On the other hand, Obama’s continues to hold a large advantage on women’s reproductive health choices and services, where he is trusted by 51 percent of likely voters compared to 33 percent for Romney.