Mitt Romney’s plan to overhaul Medicare follows a familiar Republican prescription: Use the power of the marketplace to bring down costs and improve care. Yet, such a move would fundamentally change the nature of the popular program, and treads close to a proposal that Republicans were heavily criticized for earlier this year. 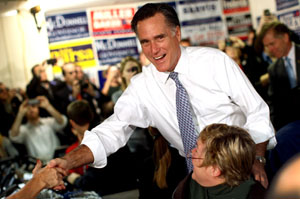 The GOP presidential candidate’s “premium support” plan would provide a set amount of money to beneficiaries, allowing them to shop around for health coverage.

Romney has promised that beneficiaries who like the current fee-for-service Medicare plan can opt for that instead of purchasing private insurance. He also says that all plans must offer coverage at least comparable to what Medicare provides today. But by giving beneficiaries the premium support, it is clear that Romney’s plan would move Medicare’s traditional program from one that pays a share of all medical bills a senior incurs to one that offers a fixed amount to buy insurance.

The Candidates On Health Care

See our chart on where the GOP presidential candidates stand on health care:

Keeping a traditional Medicare option helps differentiate Romney’s proposal from a plan advanced earlier this year by Rep. Paul Ryan, R-Wis. By doing so, Romney counters critics who charged that Ryan’s plan would destroy a popular program that has protected millions of seniors from ever-growing health care costs.

“When the president says you’re trying to get rid of Medicare he’s going to say, ‘No I’m not,'” said Robert Blendon, a professor at the Harvard School of Public Health.

Polls have shown that the public in general is split about a “premium support” model, and seniors, an important voting bloc, strongly oppose it.  Noting the negative public reaction to Ryan’s plan, even some Republicans have distanced themselves from it.

Check back tomorrow morning for clips and coverage from tonight’s GOP presidential debate in Michigan.

Romney has given few specifics about his plan, which he announced at a meeting of a conservative group Friday, but analysts said that’s not surprising.  “Every time we’ve seen a Romney plan, it’s an appetizer that hedges the details,” said Tom Miller, a resident fellow at the conservative-leaning American Enterprise Institute.

Romney, a former Massachusetts governor, has said that plans would compete on a combination of premium prices and benefits, and seniors could choose either a private health insurance policy or the government-run traditional Medicare plan. Enrollees could use their own money to obtain more generous benefits than the level supported by the government’s premium contribution. Romney’s plan would give lower-income and sicker seniors more money to purchase coverage, while wealthier seniors would receive less support.

The idea of limiting government spending on Medicare and offering private plans isn’t exactly new. Seniors already can choose to obtain their health coverage through private Medicare Advantage plans, most of which are managed care plans and cover some benefits that traditional Medicare does not, including eyeglasses and hearing aids.

Medicare Advantage plans have seen growing enrollment in recent years, thanks in large part to their more generous benefit packages, but they still serve only about a quarter of Medicare’s 48 million beneficiaries.

The lack of details in Romney’s plan leaves an array of possible scenarios for what it might mean to seniors in the future. It does not specify how much money the federal government would contribute to cover their premium costs, whether that support would rise enough each year to keep up with health care costs.

“He is exploring different options for ensuring that future seniors receive the premium support they need while also ensuring that competitive pressures encourage  providers to improve quality and control cost,” according to an outline of Romney’s proposal.

To make traditional Medicare and private plans compete on equal footing, Medicare fee-for-service plans would have to change from the current standard premiums for Part B coverage for doctor bills and other outpatient services to premiums that vary from one region of the country to another, as private insurance premiums do, said James Capretta, a fellow at the Ethics and Public Policy Center, a conservative think tank. “You’ve got to break it a little bit more into more of a region-by-region competition,” he said.

Miller agreed that fee-for-service can only be competitive with private plans if it is broken into smaller, regional units.  “Lump together some of the smaller states and allow them to have some operating authority,” he said. If they can’t operate within their budget, he said, allow them to adjust cost-sharing and establish more restrictive networks of doctors, hospitals and other medical providers.

Ron Pollack, executive director of the consumer group Families USA, predicted that Medicare’s oldest and sickest beneficiaries would be worse off under Romney’s plan. With limits on the government’s contributions for premiums, seniors could end up with fewer benefits for the same or higher costs, he said.

While younger, healthier seniors would move to private plans, some of which would have lower premiums than traditional Medicare plans, older and sicker people would remain with fee-for-service because it is what they are used to and they want the guarantee of comprehensive benefits, even if they have to pay more for it, Pollack predicted.

Joe Baker, president of the Medicare Rights Center, a N.Y.-based consumer advocacy group, discounts Romney’s claims that having more seniors in private plans will save Medicare money. The Medicare Advantage program, he said, “has not brought down costs, so to think that there’s a new version that willy nilly by itself will bring down costs is a fantasy….It’s really cover for the real goal, and that is to end Medicare as we know it and by doing that, have more money come out of the pockets of consumers and save the federal government money.”

A Congressional Budget Office analysis projected that under Ryan’s Medicare plan, by 2030 a typical 65-year old would be required to pay 68 percent of the total cost of his or her Medicare-covered services. That compares with the 25 percent they would pay under current law.

How much beneficiaries would have to pay under the Romney plan would depend on its details.

In addition to transforming Medicare into a premium support program, Romney would raise the program’s eligibility age to reflect the fact that Americans are living longer. But he has premised all of his changes on first repealing the 2010 health law.

That could leave some retirees without health coverage, because older people are more likely than younger ones to have chronic, pre-existing medical conditions. Without the health law’s requirement that insurers cover most people, many could not obtain affordable coverage.

“If you eliminate the Affordable Care Act, it means that 65 and 66 year olds won’t have that resource. The result will be a substantial number of people joining the ranks of the uninsured. Many of these folks are retired and have moderate incomes, so this is going to be a huge setback for a large number of 65 and 66 year olds who would lose coverage,” Pollack said.

UPDATED: This story was updated to add that Romney says all plans must offer coverage at least comparable to what Medicare provides today.