GOP presidential candidates Mitt Romney and Rick Santorum struck out at the Democrats’ health law in speeches Tuesday night after Romney won both the Arizona and Michigan GOP primaries.

> > Read more: Where the GOP candidates stand on health care.

Here’s a transcript of the health care mentions in their speeches after the polls closed:

ROMNEY: President Obama is making the federal government bigger, burdensome, and bloated. I’ll make it simpler, smaller, and smarter, and it’s about time for that to happen. He raised the national debt. I will cut, cap, and balance the budget. He passed Obamacare. I’ll repeal Obamacare.

You realize that after saying that Medicare and Social Security are in trouble, he has has yet to offer a single serious proposal for saving Medicare and Social Security. I have a plan to save them both — and, unlike him, I have the courage to put my plan on the table for people to see. What this campaign is about, what my plans are about, are creating jobs and raising wages for the American people. They’re gonna strengthen our entitlement programs for the next generations. And they will not add to our deficit — we will finally balance America’s budget.

SANTORUM: We will repeal every single one of Barack Obama’s big government regulations on day one. And, of course, part of those regulations — the one of the things we’re going to repeal right out is Obamacare. That is the biggest issue in this race. It’s an issue about fundamental freedom. It’s an issue about whether you want the government to take your money, in exchange, give you a right. Give you a right. They’re going to give you the right to health care; that’s what President Obama promised.

Ladies and gentlemen, we need a candidate who can go out and take on Barack Obama, who was — who was an author from 20 years ago, the author of free-market health care economics, health savings accounts, has been a fighter for replacing all of these programs across this country at the federal level with their government-run health care, with not Romneycare or Obamacare, but a program that’s based upon you called “You Care”, because that’s what we believe in, in America.

In Victory And Defeat, Romney And Santorum Bash Health Law 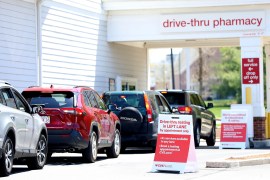 As COVID Testing Soars, Wait Times For Results Jump To A Week — Or More

KHN’s ‘What The Health?’: ‘Open The Schools, Close The Bars’