ATLANTA — Ms. Stella’s, a home-cooking restaurant in Milledgeville, Ga., serves roast beef, grilled pork chops, chicken wings and oxtails with 24 sides from which to choose. Last spring, owners Jeri and Lucious Trawick opened a second restaurant in Eatonton, about 20 miles away, and Jeri decided to leave her full-time job to help shepherd the expansion.

But she needed to update the couple’s health insurance and went shopping on the Affordable Care Act’s online marketplace. Trawick, 43, who considers herself nearly as skilled with a computer as she is with a skillet, found the Obamacare website daunting.

“It was not exactly user-friendly,” she said. Trawick needs specific medications to control her hypertension, and the section on drug coverage left her “confused.”

She turned to Insure Georgia, a program funded in large part by federal money to help consumers enroll in Obamacare. A trained navigator showed her how to compare policies on the website, look at drug formularies and examine differences in prices and provider networks.

“I could have done it without her, maybe, but it would have taken me forever,” Trawick said.

This fall, it will be different.

Open enrollment for ACA plans, which begins Nov. 1, has been shortened to 45 days. At the same time, funding for navigator programs and other support for consumers has been cut dramatically in Georgia — by 86 percent — and across the country.

The number of navigators for Insure Georgia, the nonprofit agency that has received the bulk of federal funding for enrollment efforts in past years, will drop to 21 from 42 last year, said Fred Ammons, chief executive officer of Community Health Works, the parent organization of Insure Georgia.

There is no advertising budget to even inform consumers that open enrollment begins. Ammons said he is concerned that with all the past year’s rhetoric among Republicans in Washington about repealing and replacing Obamacare, some people may not even understand that the program is still available.

That could be a problem in Georgia, which, after seeing increased enrollment in the first three years of the marketplaces, experienced a 16 percent drop in sign-ups for 2017 coverage. In some rural counties the decline was as much as 36 percent. Georgia ranks third in uninsured residents, behind only Texas and Florida. 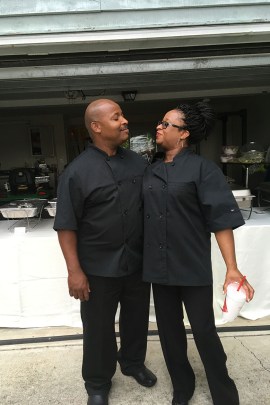 Lucious and Jeri Trawick, who have two restaurants in rural Georgia, turned to a navigator to help them decipher their health insurance choices and are nervous about less help being available when they sign up for 2018 coverage. (Family photo)

ACA supporters are concerned that residents in the rural portions of Georgia — which make up about 17 percent of the population — could be most at risk. In recent decades, those rural areas have fallen behind other parts of the state in income, educational achievement and in access to health care.

With enrollment assistance resources so strapped, it will be hard to reach out to rural consumers.

“We had a booth at the PRIDE festival in Atlanta last Sunday, and someone said, ‘Why are y’all even here? Isn’t Obamacare dead?’” Ammons said. “And if they think that in Atlanta, you can only imagine what they think in south Georgia.”

Health economist William Custer, who teaches at Georgia State University in Atlanta, echoed those fears about increases in the number of uninsured in rural Georgia.

The effects of less insurance will be felt hard in those areas, he explained. Nearly half of the state’s counties, most of them in rural areas, do not have an OB-GYN. Seven hospitals in rural Georgia have closed within the past four years. Several have closed their labor and delivery units. If people in rural Georgia lose insurance rather than gain it, efforts made in recent years by state leaders to stanch financial bleeding at rural hospitals could be jeopardized, Custer said.

“This is really the big worry. The problem in Georgia is that we have very different geographics, very different demographics and very different health care. These changes this year really seem to be pushing us even more to two Georgias,” Custer said.

Much of the cutbacks and confusion, health care advocates said, follows President Donald Trump’s disparagement of the law. He campaigned on a promise to “repeal and replace the disaster that is Obamacare” and announced in July that he would “let Obamacare fail.” Even though Congress could not pass a replacement bill, the Trump administration’s changes in timing and funding for enrollment will have an effect, the advocates charge.

“The most damaging has been the rhetoric and confusion,” said Laura Colbert, executive director of Georgians for a Healthy Future, an advocacy group. “Overall, this could be a bellwether for future years.”

And while the need for insurance is high in the state, Georgia lawmakers have been resistant to the federal health law. Georgia, like 18 other Republican-leaning states, refused to expand Medicaid, as the law allowed. The Legislature also prohibited the state from employing navigators to help enroll consumers.

Ammons, who is from rural Georgia, said he lies awake at night wondering how to reach people who need health insurance.

“I don’t know what I can do to help these uninsured people,” he said, adding that “for a brief moment, I thought ‘We can’t even do this.’”

Next, he cut every non-personnel line item he could, which meant terminating leases and closing offices. The group found donated space in Vidalia, in central Georgia, and in Brunswick, a port city near Savannah. But that leaves the southwestern portion of the state, an especially poor area of Georgia, without a nearby office.

Ammons said that other nonprofit groups have donated money that will allow Insure Georgia representatives to travel to 500 community enrollment events across the state. While Insure Georgia held more than 1,500 community events last year in all of Georgia’s 159 counties, his goal is more modest this year.

“We want to at least be in every county with a Walmart,” he said.

Jeri Trawick said she is worried for herself and for thousands of other Georgians.

To help with enrollment efforts, the Trawicks on Nov. 6 will be serving something else along with their homemade food at Ms. Stella’s in Eatonton.

“We’re going to have an open enrollment event, with a navigator here, from 10 until 6,” she said. “And I’ll be the first one in line.”