Americans living in rural areas will be a key target as states and nonprofit groups strategize how to enroll more people in health law insurance plans this fall.

Though millions of people signed up for private insurance or Medicaid in the first year of the Affordable Care Act, millions of others did not. Many live in rural areas where people “face more barriers,” said Laurie Martin, a RAND Corp. senior policy researcher. Brock Slabach, a senior vice president at the National Rural Health Association, said “the feds are particularly concerned about this.” 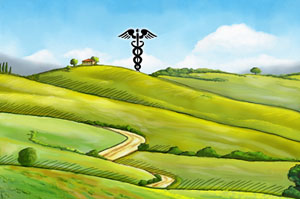 Distance is one problem: Residents have to travel farther to get face-to-face assistance from the so-called navigators and assisters hired to help consumers figure out the process. And Internet access is sometimes spotty, discouraging online enrollment.

But the most significant barriers may stem directly from state decisions about whether to expand Medicaid eligibility — more than 20 states chose not to — and whether to operate their own health exchanges. States that embraced those parts of the law generally had more federal resources as well as funds generated by their online marketplaces for outreach efforts to boost enrollment, including those aimed at consumers in less accessible areas, and more coverage options, through Medicaid, for which these consumers might be eligible.

About $2.5 million from the Department of Health and Human Services was specifically directed to rural outreach for the initial open enrollment period. For 2015, a total of $60 million will be available to bolster navigators’ work in states that are using the federal marketplace, but it’s not clear what portion of this amount will be directed to rural enrollment.

An examination of experiences in Minnesota and Virginia shows how state decisions continue to shape these efforts. Both states have significant rural populations: about 13 percent of Virginians and 23 percent of Minnesotans, according to 2013 figures from the U.S. Department of Agriculture. In 2012, both had rural poverty rates in the teens: nearly 18 percent in Virginia versus 12 in Minnesota. And between 2011 and 2012, about 9 percent of Minnesotans were uninsured, compared to 13 percent in Virginia, the Kaiser Family Foundation reported. (KHN is an editorially independent program of KFF.)

“We’re spread thin throughout the state, but that means in rural areas there are additional challenges in terms of finding the people and getting out to groups,” said Jill Hanken, health attorney at the Virginia Poverty Law Center, the state’s principal navigator agency.

In Minnesota, Ralonda Mason, a supervising attorney at St. Cloud’s branch of Mid-MN Legal Aid — which works as a navigator serving rural and urban areas near St. Cloud — echoed Hanken. Reaching people is difficult, and some areas lack strong Internet, frustrating attempts to use the online exchange.

But as the 2015 enrollment push approaches, the states are gearing up to try again.

Mason said technology problems still plague the state’s troubled marketplace, MNsure. For instance, the site doesn’t let navigators and consumers use computers in different places to simultaneously log into the application and fill it out over the phone. They must review it in person, which adds to the difficulties distance imposes. Site crashes or application failures, which navigators said they hope to see fewer of this year, add burdens for consumers or navigators already traveling far, Mason said.

Bakke, whose organization serves smaller municipalities — usually fewer than 10,000 people — said the state’s online insurance marketplace has improved. But he remains “very much apprehensive” about the potential recurrence of technical issues this fall.

MNsure is developing rural strategies such as focused marketing to reach the farmers and miners who dominate rural Minnesota, said spokesman Joe Campbell. The state plans to advertise on radio stations that appeal to these populations, he said, while sending representatives to events such as county fairs and farmers markets.

Though official data detailing 2014 enrollment by county would help, Mason said, it’s not a top priority.

A private consortium, supported by the Blue Cross and Blue Shield of Minnesota Foundation, has gathered some information examining where outreach worked. Organizations such as hers that received early grants to promote enrollment have pooled data to paint a more complete picture, pinpointing areas to focus and refining plans for November.

In Virginia, meanwhile, groups cited state decisions making enrollment more difficult. Virginia is one of 36 states either defaulting to the federal exchange or in a partnership with the federal marketplace.

Problems with healthcare.gov — the federal exchange site that had a near-catastrophic launch last October – initially compounded the challenge, Hanken said, though many exchange issues abated by December.

But the absence of federal enrollment data by county still undermines planning efforts for November.

The Centers for Medicare & Medicaid Services doesn’t know whether or when it might release enrollment breakdowns examining geography or other demographics, meaning identifying where to target outreach remains difficult, said Massey Whorley, a senior policy analyst at the Virginia-based Commonwealth Institute, a nonpartisan center that examines public policy’s consequences for middle-class and low-income people.

“It’s critically important we have this data well in advance of the next open enrollment,” Whorley said.

And unlike Minnesota, Virginia did not expand Medicaid, which would have opened the program to people with incomes up to 138 percent of the federal poverty level.

When the Supreme Court ruled in 2012 that states could opt out of expansion, a coverage gap opened for millions of people who could neither qualify for Medicaid nor the subsidies the law provides for purchasing private plans on federal and state exchanges.

Earlier this year, Democratic Gov. Terry McAuliffe vowed to use executive powers to circumvent the state legislature, which in June approved a budget blocking the expansion. Health law opponents, who currently make up the majority of lawmakers, say a bigger Medicaid program is likely to burden states with extra costs down the road.

But for now, a quarter of uninsured nonelderly adults in Virginia — just under 200,000 people — fall into this coverage gap, according to a 2014 KFF brief. The data doesn’t parse where specifically those people live, but Virginia navigators said they noticed rural areas were hit particularly hard. During the last round of rural outreach, “sometimes, half of the folks [navigators] saw in offices were in [this] gap,” said Deepak Madala, project manager of Enroll Virginia, a subsidiary of the navigator Virginia Poverty Law Center.

When clients can’t get Medicaid or private-insurance subsidies, Marcie Barnes, a navigator at the rural Southwest Virginia Legal Aid Society, said she often redirects them to free clinics.

“I talked to people who [seemed to think] if they told me how bad it was, I had a magic trick to help them,” she said. “And I don’t.”