Deona Scott was 24 and in her final semester at Charleston Southern University in South Carolina when she found out she was pregnant. She turned to Medicaid for maternity health coverage and learned about a free program for first-time mothers that could connect her with a nurse to answer questions about pregnancy and caring for her baby.

The nurse would come to her home throughout her pregnancy and for two years after her child’s birth.

“My mouth dropped,” Scott said. “I was like, ‘Thank you, thank you,’ I can’t not take this program.”

Now Scott works full time for that same Nurse-Family Partnership, a local affiliate of a national program. She spreads the word about the program to pregnant teenagers and young women in the state who may be feeling just as scared and unprepared as she did before her son, Phoenix, now 3, was born.

Her job is part of a unique private-public initiative that is expected to add 3,200 young women served by the Nurse-Family Partnership program in South Carolina. The expansion was designed in accordance with the nonprofit “pay-for-success” approach, which ties payment for social services to measurable outcomes.

This is the first pay-for-success program to be run statewide.

The expansion of the program is being funded with $30 million from private donors and the federal Medicaid program.

Philanthropists, including the Duke Endowment, the Boeing Co. and the BlueCross BlueShield of South Carolina Foundation, pledged $17 million upfront to allow the Nurse-Family Partnership to expand its services. In addition, the federal Centers for Medicare & Medicaid Services approved a waiver for the project to be reimbursed statewide. This will allow approximately $13 million in Medicaid reimbursements to providers for services over the course of the project, jointly financed by federal and state governments.

That money will seed the expansion of the Nurse-Family Partnership. Then the state will make up to a $7.5 million “success payment” to keep the program going in years four and five, but only if the partnership achieves specified results.

The outcomes to be measured include reducing the number of preterm births, child hospitalizations and emergency department visits because of injuries. Also, the program will need to show an increase in the spacing between births and the number of moms served who live in high-poverty areas.  Before the project launched early in 2016, the partnership served about 1,000 first-time mothers.

In South Carolina, more than a quarter of children live in poverty, and a majority of babies are born to low-income mothers who qualify for Medicaid.

The expansion will allow the partnership to zero in on pregnant teenagers and young women with less formal education at higher risk for complications, said Chris Bishop, executive director of the Nurse-Family Partnership in South Carolina.

“It’s a massive investment to help us grow and to serve more families, and to innovate,” Bishop said. For example, the program is trying telehealth visits “to keep moms engaged and stay in touch, and keep them in the program while they go off and become great moms.”

Having someone like Scott doing grass-roots outreach is a new strategy, too, Bishop said, noting that his organization traditionally relied on referrals from other groups. 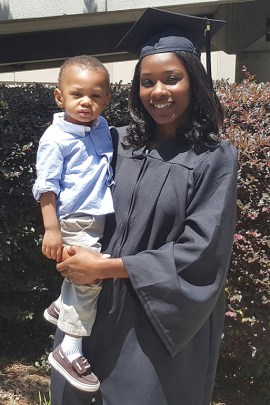 Deona Scott credits South Carolina’s Nurse-Family Partnership program with helping her through some of the difficult times during her pregnancy and after her son Phoenix was born so that she could graduate from college. (Courtesy of Deona Scott)

The Nurse-Family Partnership is a national program that has been operating for more than 30 years. During that time, dozens of studies and clinical trials have found it improves pregnancy outcomes, reduces the likelihood of child abuse and neglect and enhances school readiness, among other things.

Scott said that until she started talking with Lindsay Odell, her nurse, for example, she had no plans to breast-feed her baby. “I thought that was old-school,” she said, but Odell’s advice helped change her mind.

She also credits Odell with helping her organize child care and other details so she could complete her bachelor’s degree in kinesiology. She graduated at the end of 2015. Scott is now married and is five months pregnant with her second child.

The Nurse-Family Partnership and other similar organizations receive funding through the federal Maternal, Infant and Early Childhood Home Visiting program, for at-risk pregnant women and families. Congress bundled its nearly $400 million in funding with the Children’s Health Insurance Program appropriation two years ago, but that money will dry up on Sept. 30. Traditionally a bipartisan program, Congress is expected to reauthorize the program, and home-visiting advocates are requesting an increase to $800 million over five years.

“Many of the programs in the states are relatively small programs and because of funding can’t always go deep and saturate the community,” she said.

Continued federal funding is key. “What we really want is secure and dedicated funding,” Howard said. “We need to serve more families.”

Update: This story was updated on Aug. 8, 2017, to make clear that the $13 million in Medicaid financing will come from both the federal and state governments.