This story was produced in collaboration with the

OAKLAND, Calif. – Like thousands of people who leave prison every year in California, Stanley Riley has serious health problems and no money for treatment. 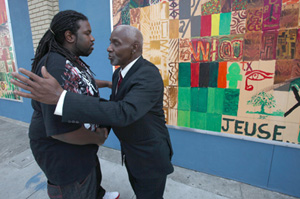 During his 13 years of incarceration for robbery and an assortment of drug crimes, he could count on getting medication for high blood pressure and diabetes. But when he was released in 2008, all he got was a standard issue three-month supply.

Now help is on the way. In coming months, local governments in California stand to gain tens of millions of dollars in federal funds to care for the indigent, including ex-offenders.

Expanded indigent-care is expected to help many of the 130,000 former inmates discharged every year in the state, as well as the mainly impoverished communities where they move upon release. The newly freed arrive home in neighborhoods in Oakland and Hayward, Richmond and Antioch, bringing high rates of chronic and communicable disease and serious mental illness.

The federal aid results from an agreement that state officials negotiated with the Obama administration to get early access to funds under the health care overhaul law. Officials in Alameda County say they could receive an extra $35 million a year on top of the roughly $100 million the county spends annually on indigent care. While details have yet to be fully worked out, they intend to spend a chunk of the new money on the formerly incarcerated.

The initiative is seen as a bridge to 2014, when the health law sets in motion a massive expansion of Medicaid, the federal-state program for the poor that in California is called Medi-Cal. Among others, low-income single adults will qualify for Medicaid for the first time – a major policy change that would help ex-offenders who struggle to find jobs and health insurance.

The boost in federal funding couldn’t come at a better time. Many programs that provide services to former inmates are underfunded – and could see an explosion in demand: Tens of thousands of inmates may be released if the U.S. Supreme Court this year upholds a lower-court decision to discharge inmates from overcrowded state prisons.

Oakland and other communities had taken steps in recent years to address the health needs of former inmates. Alameda County pours $1 million annually into the nonprofit Healthy Oakland clinic on San Pablo Avenue to help a few thousand each year. But that was barely scratching the surface, with many thousands more going without care.

The East Bay is home to some of the highest concentrations of ex-offenders in the state. About 6,500 people, or 5 percent of the 130,000 released every year from state prisons, are paroled to Alameda County.

“We have an opportunity to say, ‘This is not working, and in one of the most progressive counties in America, we will do business differently,'” says Raymond Lankford, executive director of Healthy Oakland, and pastor of the Voices of Hope Community Church. Nonprofits like his would likely benefit from the new federal money. 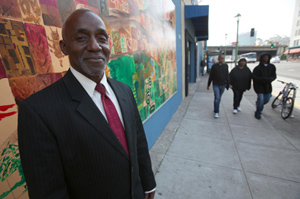 Stanley Riley is an example of how the system can work differently. His story also shows how much time, resources, personal attention and commitment are required.

Healthy Oakland intervened soon after his release from prison in 2008. A representative visited a drug treatment center where Riley, a recovering heroin addict, was living, and offered everyone there $25 if they would drop by the clinic.

Riley took the money  and soon also got the diabetes medicine he needed.

Today, one of his most important supporters is another former inmate and heroin addict, William Grajeda, co-founder of a West Oakland nonprofit called The Gamble Institute that helps former inmates return to the community.

Grajeda, a pastoral counselor certified in helping people with a history of drug and alcohol abuse, runs a kind of ministry on wheels, putting a thousand miles a week on his Toyota. He has taken Riley to church, helped him register for classes at Merritt College, and after a recent relapse, got him enrolled in a detox program to avoid a parole violation that would return him to prison.

“Going to college? Me? Come on!” Riley says in disbelief of his own good fortune. “I got positive people in my life now. I got somewhere to go when I wake up in the morning.”

Not all former inmates are so committed or supported. They’re often apathetic about their health, studies have shown, even when they have serious disease.

Authorities at the Santa Rita Jail have long seen repeat offenders with HIV returning in much poorer health than when they left  even though AIDS drugs and support are widely available at community clinics.

Rates of hepatitis C infection in Alameda County are so high among long-term injection drug users that relatively few bother to get tested or seek treatment. “The attitude is, ‘Everybody has it so who gives a (darn)?'” says Dr. Diana Sylvestre, an internist in West Oakland, who has seen 3,000 people with hepatitis C over the past decade, many of them having cycled through the criminal justice system.

Former inmates often are key players in the efforts of counties to expand indigent care. Half the 40-person staff at Healthy Oakland has seen the inside of a prison or jail including several who do community outreach and recruit at weekly meetings at the county parole department. They include Shawn Vasquez, a one-time drug dealer nicknamed “The Boss Man” who used to hold forth from the Heartbreak residential hotel on San Pablo at the peak of the crack cocaine epidemic in the 1990s. 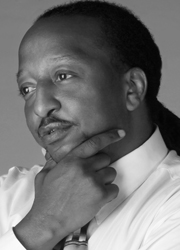 Another is Donald Williams, Lankford’s brother who ended up in prison, off and on for 20 years, starting in the 1980s. Among other duties, Williams acts as the designated driver of the organization’s van, occasionally picking up former inmates from San Quentin under a program that connects newly released inmates with medical care.

Glenn Hopkins got a ride from Williams when he was discharged in December and was soon signed up for the county indigent care program, which could help him get medications for his schizophrenia and bi-polar disorder.

Only 28 years old, Hopkins has been in prison for armed robbery and violating parole by allegedly assaulting the pregnant mother of his child. After his release, he says he planned to enroll in community college to become a welder. Williams encouraged him “to stay focused on what you got to do.”

“I got people in my life that was trying to discourage me,” Williams says, recalling his own up-and-down experiences on the street. “I just separated myself. That is what really helped me, changing my environment. That is hard. This old environment, this unhealthy environment, it calls me. It calls me every day.”

As for Hopkins, he made an appointment for a follow-up visit last month, and in what Williams said was an auspicious start to his new life on the outside, kept it.

Under federal funding rules, local officials will have some flexibility in deciding who qualifies for help. Both Alameda and Contra Costa counties, for example, are proposing to include people who earn as much as twice the poverty level, or $21,780 annually for single adults.
But the money comes with strings that could trip up some counties looking for help. For one thing, it is available only if counties maintain their existing funding for indigent care; the idea is to make sure that the federal money is used to expand programs rather than supplant local funding.

The programs will also have to offer a fuller range of benefits, including coverage for mental health treatment. Provider networks will have to be more extensive, and hospitals will have to meet new tests for their accessibility. Those that pass will be reimbursed by the federal government at a rate of 50 cents for every local dollar spent.

Stressed budgets  and the fact that money must be spent upfront to get the federal match  are putting some counties in a quandary. With the more generous and expensive coverage requirements, Santa Clara County is proposing to limit eligibility in its new indigent-care program to people earning just 75 percent of the poverty level. The county is happy for the federal support, but “it is not the silver bullet,” says Michael Lipman, acting director of planning, contracting and business development for the Santa Clara Valley Health & Hospital System. A less-generous health plan will be available for those with higher incomes.

Health policy experts see the deal that California made with Washington as bringing the reality of reform to people sooner rather than later. “This is a jump start on getting at least a significant portion of individuals into the system now rather than waiting for three years,” says Gerald Kominski, a professor at UCLA and associate director of its Center for Health Policy Research.

San Mateo is hoping to use the federal funds to offset the cost of substance abuse treatment for hundreds of uninsured residents.
Contra Costa expects the total number of people eligible for its program to grow about 50 percent to about 18,000 people within a year. “We are banking on the fact that promises were made, and the money will follow,” says Dr. William Walker, director of the county’s health services agency. “We are out there … moving ahead.”

Anticipating a surge in enrollments, Briscoe, the Alameda County health director, wants to expand access to care with clinics in schools, churches and fire department sub-stations. 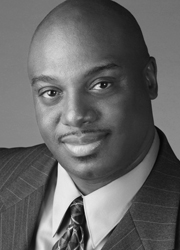 Lankford is hoping to open a sister clinic in East Oakland by the summer. And a network of churches in Southern California is looking to replicate his model with locations in several counties throughout the state including Solano.

To advocates for ex-offenders, this would be money well spent, a way to start steering public funds away from what they view as costly, failed policies of the past that have focused on punishment and incarceration rather than rehabilitation and wellness.

“These are people, by and large, that we have systematically failed in terms of almost every public institution that was responsible for them,” says Junious Williams, chief executive of the Urban Strategies Council, a community and advocacy group that has advised Alameda and Contra Costa counties on health care polices for parolees and probationers.

“We put them in jails and prisons for long periods of time, and we failed to rehabilitate them. They are right back on the streets, and most of them are in as bad or worse shape than when we sent them away,” he says. “It is short-sighted not to figure out how to break the cycle, if no other reason, because we just don’t have the money anymore.”