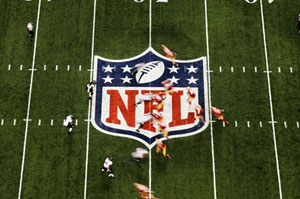 The San Francisco 49ers play against the Baltimore Ravens during Super Bowl XLVII at the Mercedes-Benz Superdome on February 3, 2013 in New Orleans, La. (Photo by Chris Graythen/Getty Images)

“The NFL is enthusiastically engaged … and they see health promotion as a good thing for them and for the country,” Health and Human Services Secretary Kathleen Sebelius said during a media briefing Monday.

Sebelius said the administration is also talking to other major sports franchises about improving public awareness of the Obamacare online insurance exchanges, which are a critical way the federal health law expands insurance coverage.

The administration is aiming to sign up about 7 million people through the marketplaces before the open enrollment period ends March 31. The coverage takes effect Jan. 1.  Most people shopping in the marketplaces will be eligible for federal subsidies that vary based on their income. Surveys show little public awareness of the exchanges, or the availability of subsidies, particularly among the uninsured who are most likely to use them.

“We are having active discussions with a variety of sports affiliates with paid advertising and partnerships,” Sebelius said, adding that she has been involved in the talks personally.

The NFL and other professional sports organizations such as the National Basketball League and Major League Soccer are obvious places for the federal government to target young men to sign up for coverage, Sebelius said.  The administration needs to find millions of young and healthy people to help balance out its insurance risk pool to make up for the older and sicker people who are expected to sign up. In 2014, insurers will no longer be able to turn people away or charge higher rates to people with pre-existing health conditions.

When Massachusetts launched a similar marketplace in 2007 — an effort that became a prototype for the federal health law — the campaign was advertised during Red Sox games at Fenway Park. That marketing is widely credited with helping build public acceptance. 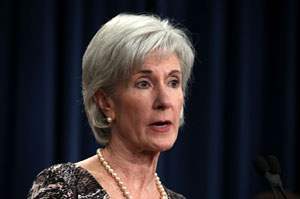 Sebelius said an NFL official told her that moms are actually the best people to give advice about insurance, including to NFL players — better even than wives and girlfriends. She said she shared that assessment.

The NFL had no comment on Monday. Politico last week reported the administration was in talks with the NBA to help promote Obamacare.

HHS on Monday also announced that it had rolled out a revamped www.healthcare.gov site, which is home to the insurance marketplaces in 35 states, and opened a 24-hour-a-day call center to help consumers prepare for open enrollment by calling a toll-free number at 1-800-318-2596. People in 15 other states that are building their own exchanges, such as California and New York, will go to other websites.

Federal officials said people must buy coverage before open enrollments ends March 31 or they will be subject to a fine of  $95 or 1 percent of their income. The penalty goes up in subsequent years. The penalty won’t be a big part of the early marketing campaign to promote the marketplaces, but it will be in the message as the March 31 deadline nears, an HHS health official said.

Sebelius said she is confident that public awareness of the new marketplaces will grow over the next few months as education efforts kick into high gear.

“The most daunting aspect is people still don’t know enough about what is going to change in the law …and still have misinformation,” she said. “The upside is once people are made aware of what is coming and what kind of financial help…there is a very positive response.”