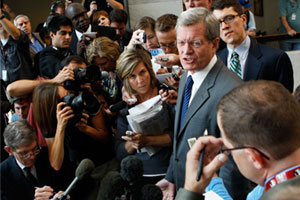 Senate Finance Committee Chairman Max Baucus, D-Mont., will unveil his long awaited health care overall bill by midweek and told reporters this morning that the overall cost would come in below $880 billion over the next 10 years, about $20 billion less than the price tag used by President Barack Obama in a major speech to Congress last week.

The Finance Committee could begin work on the bill as early as next week, according to Senate leadership aides, and then it would be melded with a second bill approved earlier this summer by the Health, Education, Labor and Pensions Committee for action on the Senate floor the following week.

Baucus has been negotiating for months with a small group of key Democrats and Republicans in hopes of drafting a bipartisan bill that might become the template for a final agreement later this fall, although there are still no firm signs that any of the three Republicans  Charles Grassley of Iowa, Mike Enzi of Wyoming and Olympia J. Snowe of Maine — will sign onto the bill. Baucus emerged from a morning meeting with the so-called “Gang of Six” declaring that the group was making good progress and that “we’re working towards a bipartisan solution.”

The remaining sticking points in the negotiations include Medicaid funding, immigration, medical malpractice, abortion and more general affordability issues, according to senators and aides.

One of the biggest problems is working out a compromise with governors over sharing the cost of Medicaid coverage over the next 10 years. Baucus and Senate Budget Committee Chairman Kent Conrad, D-N.D., said that the negotiators have come up with a possible solution for easing the cost burden of the states that they will discuss with governors in a conference call tomorrow. Conrad said that the “vast responsibility” for the cost sharing should fall to the federal government.

Negotiators are also working on language that would make it emphatically clear that illegal aliens would not be able to obtain health care coverage under the program and that the government would experiment with Medicare malpractice pilot projects to try to bring down the cost of malpractice verdicts and settlements — a major initiative of the Republicans and one that Obama said has merit.

Last week, Baucus released a framework of possible legislation that would cost less than $900 billion over 10 years, that would impose new fees on insurers and that would create a network of consumer-owned insurance cooperatives.

Today, Conrad said that the emerging Finance Committee bill would be fully paid for, meaning it wouldn’t add to the federal budget deficit, and that an analysis by the Congressional Budget Office pegged the total cost at below $880 billion.

The Baucus framework does not include a public insurance option — an initiative favored by the president and many liberal Democrats in the House but is opposed by virtually all Republicans and many moderate to conservative Democrats in the Senate. Many Americans spoke out against a public option during town meetings in August, and polling shows that Obama would have a much better chance of passing legislation this fall if the Democrats dropped the proposal from their legislation.

Senate Health Bill On The Floor Within Two Weeks