Dan Driscoll used to be a smoker. During a regular doctor’s visit, his primary-care physician suggested that Driscoll be tested to see if he was at risk for an abdominal aortic aneurysm, a life-threatening condition that can be linked to smoking. The doctor said Medicare would cover the procedure. So Driscoll, 68, who lives in Silver Spring, had the test done and was surprised when he got a bill from Medicare for $214. 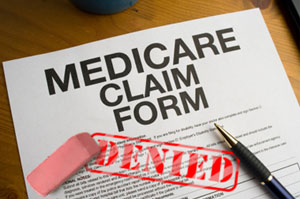 “I didn’t accept that,” he said, because based on everything he had read from Medicare, he was sure this was a covered service. So Driscoll did something that seniors rarely do: He filed an appeal.

Of the 1.1 billion claims submitted to Medicare in 2010 for hospitalizations, nursing home care, doctor’s visits, tests and physical therapy, 117 million were denied. Of those, only 2 percent were appealed.

Few seniors have the patience, tenacity or health to question a coverage denial, say advocates and counselors in the Washington area. And those who do appeal but lose on the first try tend to give up too soon, they say.

“People lose, and then they lose heart, or they are too sick, too tired or too old, and they give up,” said Margaret Murphy, associate director of the Center for Medicare Advocacy, which has offices in Washington and Connecticut. “Or their kids are handling the appeal and they are too overwhelmed caring for Mom or Dad.”

Medicare officials say appeals are rare, though they would not provide statistics on how many appeals came from beneficiaries rather than from health-care providers, such as hospitals, doctors and nursing homes.  The inspector general’s office in the Department of Health and Human Services reported last month, however, that 85 percent of appeals in 2010 that reached the third level of review, which are decided by an administrative law judge, were filed by health care providers.  And for those who persevere and do appeal a third a third time, the OIG found that the judges reversed 56 percent of all unfavorable decisions in 2010.

Medicare officials this year redesigned the quarterly beneficiary statements to make instructions about the appeals process clearer, said an agency spokeswoman, who did not respond to requests for additional information.

Some problems can be resolved without appealing, said Mary Ann Parker, an attorney with the District’s Long-Term Care Ombudsman Program, which advocates for nursing home residents.

Sometimes a payment is denied because the doctor or other provider used the wrong treatment or billing code. If the provider resubmits a corrected claim, it will most likely be paid.

The Center for Medicare Advocacy receives state funding to help Connecticut residents navigate the Medicare program, and handles several hundred of their appeals a year. Murphy said less than 10 percent of these cases overturned in the first and second levels of appeals. “It’s almost an automatic denial,” she said.

But at the third level of appeal, the center has won roughly 60 percent of its appeals in the past three years. “If people knew that they are likely to lose at the first couple of levels, they would stick it out until they got to a judge,” Murphy said.

“The administrative law judge stage is the first level when you can interact with a human,” said Diane Paulson, senior attorney at Greater Boston Legal Services, which handles about 50 appeals a year. The first two levels of appeals are based on documents only.

Driscoll thought his case was a slam-dunk. Following instructions on his quarterly Medicare statement, he circled the charges he was questioning and sent it to the Medicare contractor’s address listed on the notice. When he was turned down, he tried again, this time including a letter from his doctor saying that the aneurysm test was medically necessary. He attached pages from the “Medicare & You” handbook that say Medicare covers the test. “There was a lot of back-and-forth,” he says, that required him to call his physician and the radiologist who performed the test to collect additional information.

His appeal was turned down again. Driscoll said he was unable to find out why. But that was enough for him.

“I paid the bill and I gave up,” said Driscoll, who at the time was in the process of moving and retiring from his job at a nonprofit agency. He paid the $214 charge last year. “I spent over a year on this thing, and it wore me out.”

Janice Prokop-Heitman’s mother didn’t have that kind of time.  “My mom was in a nursing home in 2011 after she had a serious stroke,” said Prokop-Heitman, who lives Plymouth, Mich., a Detroit suburb.

After about seven weeks, the home told Prokop-Heitman that her mother wasn’t responding to treatment and gave her 72 hours to move to another facility for custodial care. But there wasn’t time to find another facility and she didn’t want her mother “bounced from place to place.” So she hired a former rehabilitative care nurse as a consultant to help prepare a fast-track appeal, which is decided sooner than a standard appeal.

“I was learning about this as I was doing it,” she said but with the consultant’s assistance, she won the appeal. The nursing home was required to resume her mother’s speech therapy, while she and her sister-in-law looked for another facility and found one. “We were lucky,” she said.

Seniors Need To Be Tenacious In Appeals To Medicare