For decades, hospitals have strained to accommodate patients in psychiatric crisis in emergency rooms. The horror stories of failure abound:

Patients heavily sedated or shackled to gurneys for days while awaiting placement in a specialized psychiatric hospital, their symptoms exacerbated by the noise and chaos of emergency medicine. Long wait times in crowded ERs for people who show up with serious medical emergencies. High costs for taxpayers, insurers and families as patients languish longer than necessary in the most expensive place to get care.

“If you are living with schizophrenia or bipolar disorder, that is a really tough way to begin that road to recovery,” said Dr. Jack Rozel, president of the American Association for Emergency Psychiatry.

In pockets across the country, hospitals are trying something new to address the unique needs of psychiatric patients: opening emergency units specifically designed to help stabilize and treat patients and connect them to longer-term resources and care. These psychiatric ERs aim to address the growing number of patients with mental health conditions who end up hospitalized because traditional emergency rooms don’t have the time or expertise to treat the crisis.

The rate of ER visits involving psychoses, bipolar disorder, depression or anxiety jumped more than 50 percent from 2006 to 2013, according to the federal Agency for Healthcare Research and Quality. Roughly 1 in 8 emergency department visits now stem from mental illness or substance use disorders, the data show.

The psychiatric ERs, staffed with nurses, social workers and psychiatrists, work to treat and release patients in under 24 hours, much as traditional emergency rooms handle physical ailments. Those who are well enough to go home get discharged, while those who need more treatment are admitted to the hospital or transferred to an inpatient facility.

There are now roughly 100 such units across the country, said Dr. Scott Zeller, vice president of acute psychiatry at Vituity, a physician-led organization that provides staffing and consulting services to medical centers nationwide.

Zeller pioneered the approach while working as chief of psychiatric emergency services at John George Psychiatric Hospital in Alameda County, Calif. Over time, he transformed the center from a traditional ward where restraints were common into one that treated patients in a more supportive, living-room like setting. The results — in terms of both patient outcomes and cost-savings — made Zeller a believer.

He is helping design 10 new units, including in California, Florida, Illinois and Tennessee. Each is distinct, accepting patients in somewhat different circumstances and offering a slightly different range of services.

Patients who arrive at an emergency room for psychiatric or substance use disorders are more than twice as likely to be admitted than other patients, federal data show. And yet about 80 percent of the time, Zeller said, patients’ mental health crises can be resolved without a costly inpatient hospital stay. A patient may be having a psychotic episode because he fell off his medications, for example, or having drug-induced hallucinations.

“We need to treat people at the emergency level of care,” he said. “The vast majority of psychiatric emergencies can be resolved in less than 24 hours.”

Wearing a hospital gown, Rachel Diamond lay back in her recliner in a spacious room in a relatively new ward at Providence Little Company of Mary Medical Center San Pedro, a hospital near the Port of Los Angeles. Nearby, a few patients slept on identical recliners, draped in soft blankets. Others communed at a kitchen table over microwaved meals. A nurse walked through the locked unit with a rolling cart, dispensing medications.

Except for a nursing station in the middle of the room, the unit didn’t look much like a health care facility. The room was divided into men’s and women’s sides, with separate TVs. A few smaller rooms — where patients could meet with a psychiatrist or social worker — lined the unit’s edge. 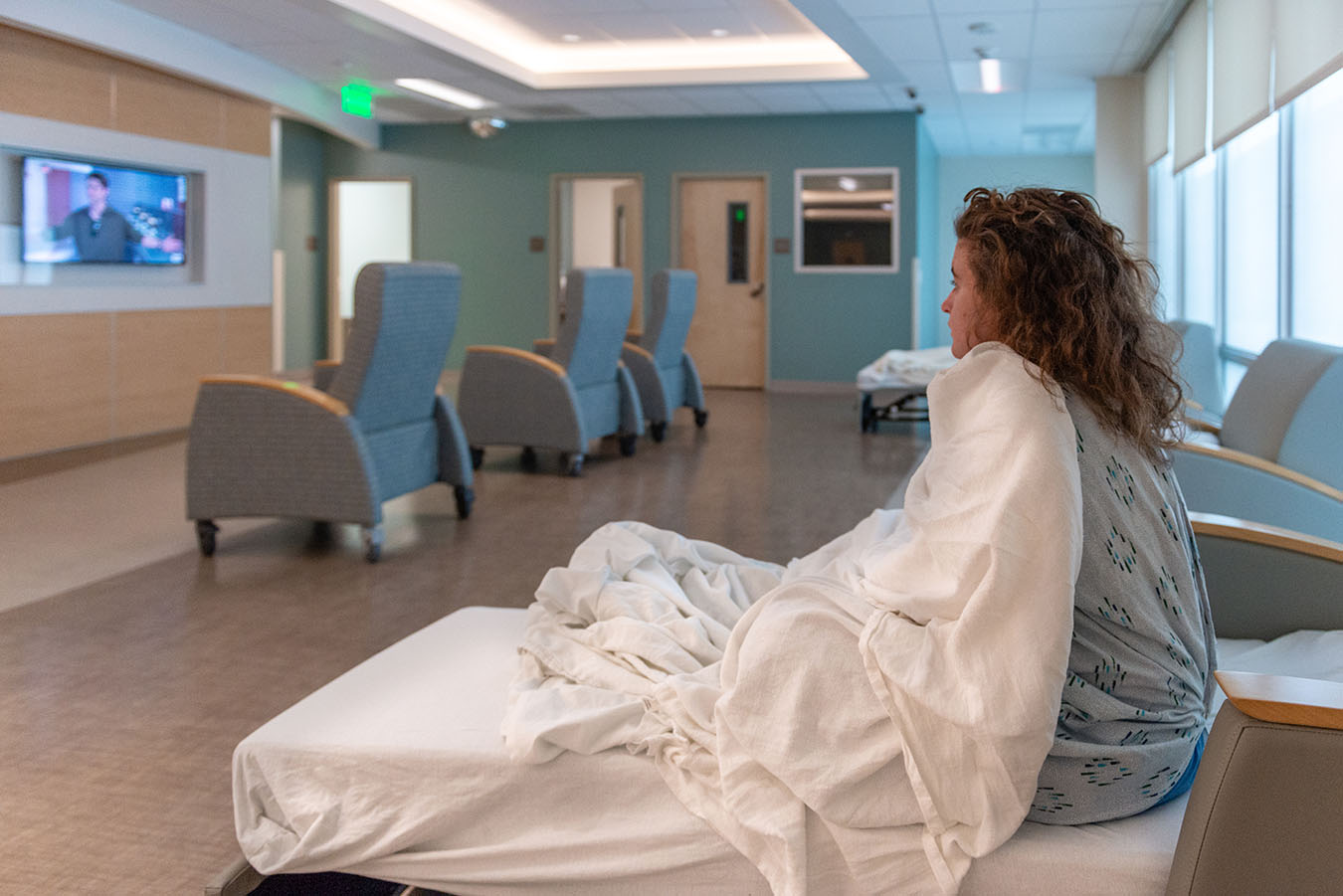 Rachel Diamond says she has been diagnosed with depression and anxiety and has landed in multiple ERs over the past decade when her symptoms spiked out of control. During her stay at Providence Little Company of Mary, which lasted just over a day, she slept, received medications and met with nurses, a social worker and a psychiatrist.(Heidi de Marco/KHN)

Anya Price, interim clinical supervisor and a nurse, said the unit was designed to feel more like a home than a hospital. “We’re operating from an understanding that they’re coming here to get better,” Price said.

The open design of the unit, known as the “Outpatient Behavioral Health Center,” allows patients to move freely. Staff said it also helps reduce problems because they can quickly spot a patient who may be getting agitated. Dr. Herbert Harman, a psychiatrist and medical director for the facility, said violence and the need for restraints are rare.

The unit is in a building a short walk from the medical center emergency room. It opened in 2017 and accepts patients from emergency rooms across Los Angeles County once they are deemed stable medically. So far this year, its staff has treated about 400 patients, Price said.

One recent morning, the patients included a man in his 40s found on the railroad tracks after an alcohol binge, and a woman with a history of schizophrenia who said she was seeing spirits. Some were there on involuntary holds because authorities had decided they were at risk of hurting themselves or others because of their illness. 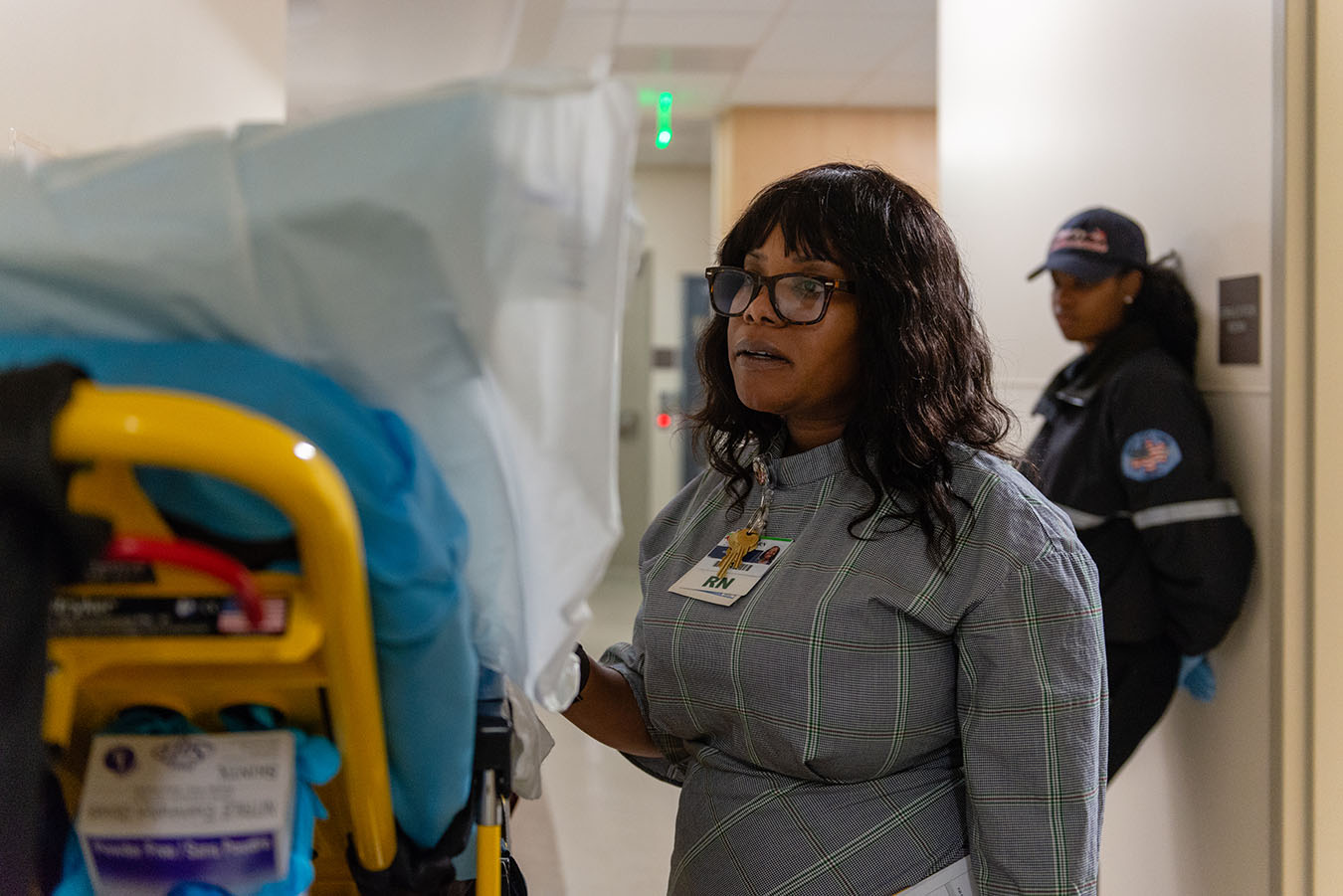 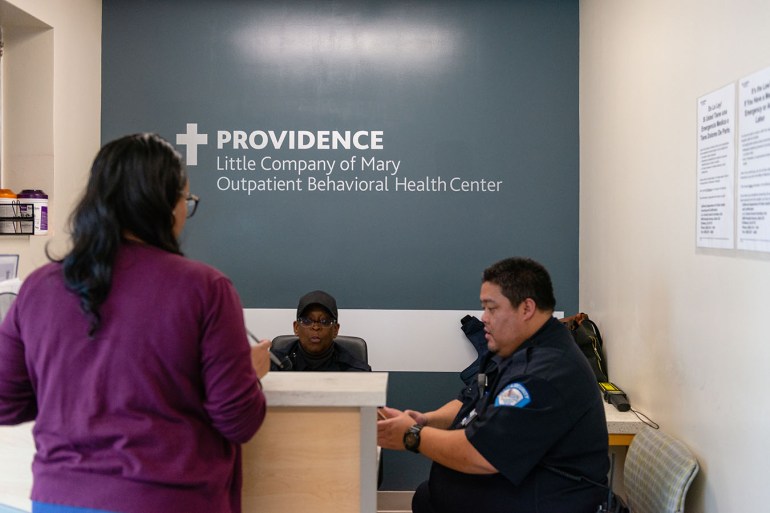 Staffers at the new emergency psychiatric facility run by Providence Little Company of Mary Medical Center San Pedro prepare for an incoming patient on the morning of Feb. 28, 2019. The hospital near the Port of Los Angeles opened the behavioral health unit in 2017 and accepts patients from emergency rooms across Los Angeles County.(Heidi de Marco/KHN) 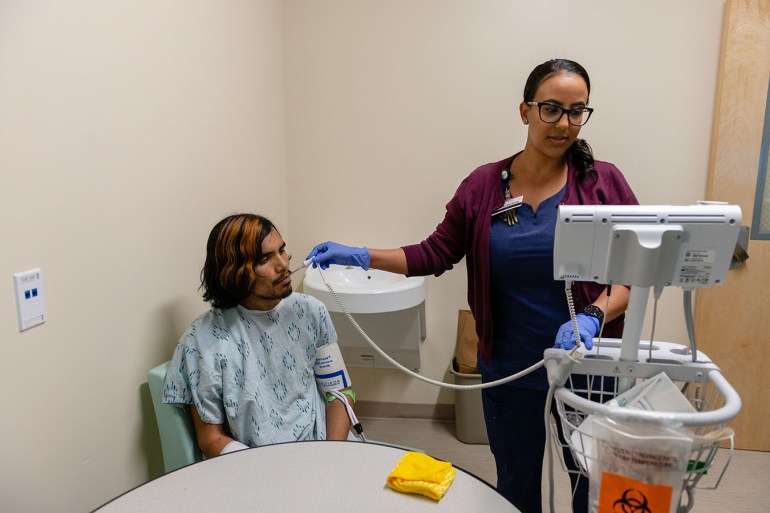 Diamond, 30, said she has been diagnosed with depression and anxiety and has landed in multiple ERs over the past decade when her symptoms spiked out of control. During those stays, she said, she often felt isolated and in the dark about her treatment. Doctors typically numbed her with medications and consigned her to a guarded room. “No one really talked to me,” said Diamond, who lives in Torrance, Calif. “It was like I was a caged animal.”

She had been living in a car and fighting with her boyfriend in late February when she decided she wanted to end her life. She tried jumping out of a moving car, and when that didn’t work, she grabbed a bottle of pills. She gets help for her mental health issues, but sometimes, she said, the stress becomes too much. This time, she was taken to a hospital emergency room in Torrance before being transferred to the San Pedro unit.

During her time in the behavioral health center — about 26 hours — she slept, received medications and met with nurses, a social worker and a psychiatrist. She said it was calmer than a regular ER, and the staff had time to talk, listen and help her through the worst of the crisis.

“I genuinely feel better enough to leave,” she said. “I haven’t been able to say that in a while.”

A Return On Investment

Zeller argues that the use of emergency psychiatric clinics is both humane and cost-effective. Research on the Alameda County model found such units can dramatically reduce how long patients spend in medical emergency rooms, and that about three-quarters of patients treated in the units can be discharged to the community rather than to inpatient care. That, Zeller said, can lessen the overwhelming demand for inpatient psychiatric beds and preserve available spots for those who truly require them. The model saves money for hospitals in part because the patients spend less time in emergency care.

“The return on investment is exponential,” he said.

In Montana, the Billings Clinic opened a psychiatric stabilization unit last April across the street from the traditional ER. Dr. Eric Arzubi, psychiatry department chair, said nearly 10 percent of the visits in the Billings Clinic emergency room involve people in psychiatric crisis. Since the new unit opened, wait times for psychiatric patients have dropped from about 10 hours to four hours, and fewer patients are being admitted to the inpatient unit. Arzubi said his staff isn’t trying to cure people of their mental illness but rather stabilize them and get them the care they need.

“Just like in the emergency room, you don’t get comprehensive care,” Arzubi said. “But you can stop the bleeding, you stabilize the patient and get them to the right level of care.”

In some cases, that means a transfer to an inpatient facility. 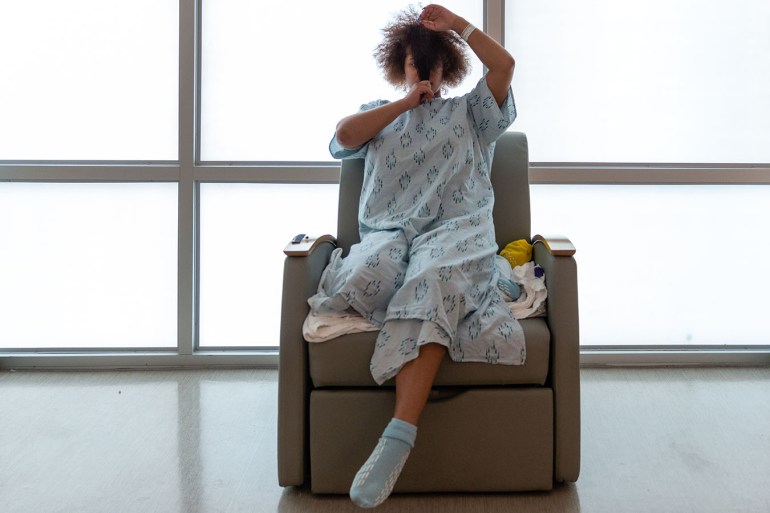 Chantelle Unique has been diagnosed with bipolar disorder and schizophrenia. She had been dancing on the roof and speaking gibberish when her mother called 911. Unique says she has had a hard time in regular emergency rooms. “There are a million people,” she says.(Heidi de Marco/KHN) 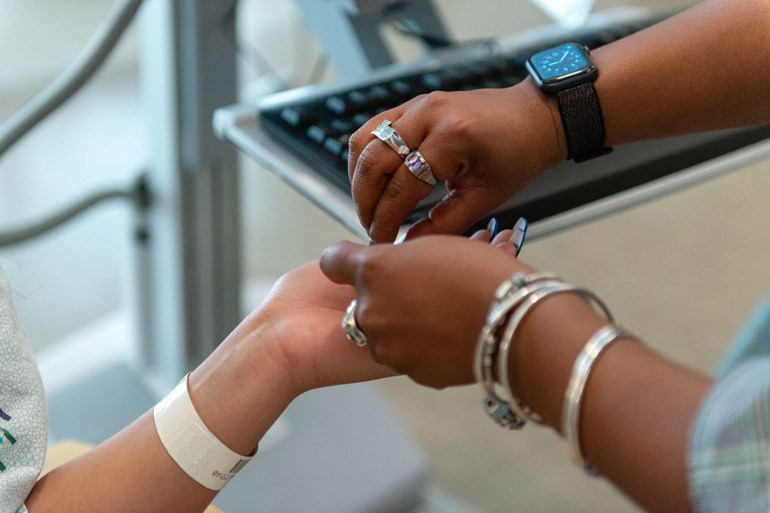 Staff at the San Pedro unit decided soon after Chantelle Unique arrived that she would be one of those patients. Unique, who is 23, has been diagnosed with bipolar disorder and schizophrenia. She had been dancing on the roof and speaking gibberish when her mother called 911.

Unique said she has had a hard time in regular emergency rooms. “There are a million people,” she said. For most of a morning at the San Pedro facility, she sat calmly watching TV, talking to nurses and eating spaghetti. But at one point, she started pacing and yelling at other patients. Nurses and security guards quickly surrounded her and persuaded her to return to her recliner and take additional medication.

Finding an inpatient bed for a patient like Unique with more progressed mental illness is not always easy, said clinical social worker Mark Tawfik. But he’s committed to finding a way. “We have to make sure we find them adequate resources,” he said. “Otherwise, they will come right back.”

For Price, the clinical supervisor, even when a patient requires a transfer for more intensive care, there’s satisfaction in knowing that person is headed in the right direction. If Unique hadn’t been brought in, Price said, she would have been out in the community, lost to her delusions, putting herself at risk of accident or arrest.

In the unit, staff made sure she was safe, Price said, in addition to providing “a warm bed, some food and some compassion.”

She Was Dancing On The Roof And Talking Gibberish. A Special Kind Of ER Helped Her.