SAN JOSE, Calif. – Angela Felan is sitting in the emergency department waiting room at O’Connor Hospital for the second time in a week. A blue surgical mask covers her nose and mouth, and her hoodie sweatshirt is pulled snug over her head. She first came into the emergency room a few days ago with what she thought was bronchitis. The doctor prescribed an inhaler that cost her $56. She works part-time in retail and hasn’t had insurance for at least a decade because she can’t afford it.

“And unfortunately, even not having insurance is just as expensive,” she says. 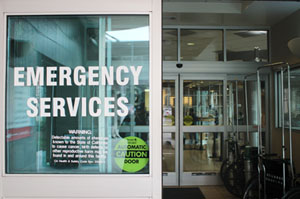 Felan, 31, has heard of the state’s insurance exchange – called Covered California – but she worries coverage will still be pricey. She’s unsure if she will qualify for subsidies for private insurance because of her low income, or even Medicaid. “As far as today goes, I’m expecting another large bill from the hospital,” Felan says. “Previously, when I would come in uninsured, I would get like a $200 or $300 bill for just one visit.”

Some 5,000 uninsured people come into O’Connor Hospital’s emergency department each year, and now it is Araceli Martinez’s job to help them find coverage. In an office just down the hall from the ER, Martinez runs the Health Benefits Resource Center which has beefed up staffing and hours, with funding from Covered California, in response to the Affordable Care Act. Martinez says prior to 2014, uninsured patients had few options to pay off hefty hospital bills or enroll in health coverage. Now when they come in through the emergency room and are faced with a bill, “they’re saying at that time, ‘Well, maybe I can afford [some coverage].’”

Still, most patients remain thoroughly befuddled about the law. Half of uninsured adults who could get policies now through the health insurance marketplaces have never tried to buy insurance on their own, and, in California, nearly one out of two poor adults don’t know they would qualify for Medicaid. Martinez estimates seven out of ten of the uninsured patients she sees can now get coverage, if those patients follow up and apply.

Hospitals are motivated to sign patients up. For those who qualify for subsidized, private insurance, the reimbursement rates are welcome revenue at a time when hospitals are facing Medicare cuts. As for Medicaid, 26 states and the District of Columbia have opened the program up to most poor adults, and that means if an uninsured patient, like Angela, is found eligible, hospitals can get paid retroactively for medical treatments going as far back as three months. 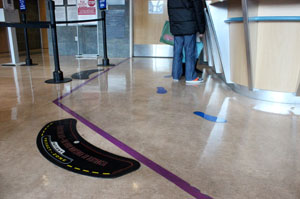 O’Connor Hospital in San Jose, Calif., asks patients to remain behind a “privacy line” in the emergency department (Photo by Sarah Varney/KHN).

“I think the emergency department waiting room is one of those places where you have low-hanging fruit,” says Renee Hsai, an associate professor of emergency medicine at the University of California, San Francisco. “They’re not the sickest of the sick because at least someone, the triage nurse, has deemed them stable enough to wait. And if they’re waiting, they might as well be filling out some application form, or at least learning about the process.”

The president and CEO of O’Connor Hospital, Jim Dover, doesn’t expect to get a whole lot more money if more people are signed up for Medicaid. California has one of the lowest reimbursement rates in the nation. Even so, he sees it as a worthy goal. Dover says he wants to get patients insured so they don’t have to come to the ER for common problems. “Let me use this metaphor: A person is coming down the river, and they’re drowning, and you jump in and pull them out. And then they come down again, and you pull them out. Next. Two. Three. Four. Five. At some point , you have to go up the river and take care of the spot where they’re all falling in.”

But few in the crowd staring blankly at the TVs in the emergency department waiting room, and parents corralling sick and grumpy children, seem in the mood to sign up for health insurance. Angela Felan emerged from seeing the doctor clutching a stack of papers. The doctor told her she had a worrisome ear infection and needed antibiotics. When she came to the emergency department a few days ago, the discharge nurse didn’t mention anything about new insurance option. But at the end of this visit, she says, “someone said they would give me a financial packet, and I could call the number on that and someone would go over financial options with me.”

Calling later sounded good to Felan. She had spent enough time in the ER and was ready to rest. “You just want to go home and just relax and not deal with anything ‘cause your head is pounding and you just don’t feel good.”