Late last Friday, the Catholic Health Association dealt the Obama administration a blow when it announced that it would not support a compromise plan on contraception coverage. In an effort to work with religious organizations’ concerns about providing free contraception in employees’ health plans, the administration had proposed that insurers be the ones to contact workers and pay for the coverage. 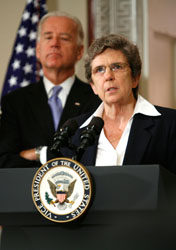 KHN’s Mary Agnes Carey talked with CHA chief Sister Carol Keehan, a key ally of President Barack Obama during the run up to passage of the health care law. The group represents more than 600 hospitals and 1,400 long-term care and other health facilities across the country. Here is an edited transcript of the interview:

MARY AGNES CAREY: Your support was key to President Obama and Democrats passing the health care law. You did express your concern about the contraception coverage provision of the law last September in a letter to the administration. Could you walk us through the chronology of what happened between then and the letter you sent last Friday?

SISTER CAROL KEEHAN: Our position has been consistent all through – and even before – we supported the reform act itself. We were very clear that, first and foremost, it could not contain coverage for abortion. And that it had to respect the life issues – not only the unborn but people who have handicaps, people who have dementia. And there had to be a major thrust for the most vulnerable to get coverage.

The Catholic Health Association has worked for decades to get more coverage for people. So when we heard about the preventive services provisions, we were  very pleased. Take a single mother with two children. A $20 co-pay for a mammogram may be the difference between dinner for the two days before payday or filling her child’s asthma prescription.

So the preventive services to allow for physicals, mammograms, colonoscopies, etc. were, to us, very, very important. That HHS included contraceptive coverage and sterilizations was not unexpected but, frankly, we did expect and felt all along that the typical exemption for a religious institution that has religious objections to it would be honored.

Initially, we felt like we were being told that that was in the works. I don’t want to second-guess why that changed, but when it changed – and all we had was a year deferment if we were a ministry of the church and a new definition for what constituted a religious organization – we were very concerned.

And I expressed those concerns directly to the president, to all of his staff and said something had to be changed.

Publicly and privately, I was very clear. And when the president made the first accommodation, initially, we said, ‘All right, that’s a great step forward. Let’s take a look at it.’ We’ve spent an enormous amount of time trying to, with his staff, with the staff of the administration, trying to say, ‘Okay, how could we make this work?’

MARY AGNES CAREY: The compromise plan that the administration came out with in February would say, in essence, that it would be the insurer, not a religiously affiliated employer, that would contact individuals about how to get contraceptive services and they would be provided at no cost. At the time you said we’re very pleased with that. But last week you withdrew your support.

SISTER CAROL KEEHAN: I wouldn’t say as much as we withdrew support. What we said very clearly was that it is just too cumbersome. And I’ll tell you why.

Many, many, many of our organizations offer a choice in health coverage to their staffs. So they would have two different ways of dealing with their employees on this issue and, quite frankly, many of our members were hearing from local insurance companies and agents that ‘well, we may not carve out explicitly how we’re charging you for this but there is no free lunch and you are going to pay for it one way or the other.’ That was exactly what the goal was not. The goal was to not pay. And that’s not the fault of the White House. That’s the reality of the marketplace.

I’m not going to tie you down to all the ins and outs of Catholic theology on the doctrine of cooperation with evil. But basically, we had a theological concern on it, and we had a concern just on what it was intended to be.

MARY AGNES CAREY: But did this issue of a pass-through, in essence — it being added to the cost of the coverage for one of your members, did that not occur at the time the February announcement was made? It seems like that was a fairly easy connection to make.

SISTER CAROL KEEHAN: Well, it’s an easy connection to make, but we had – and I think a lot of people had – good faith assurances from national leaders that this could be made to work. And that they really wanted to make it work.

MARY AGNES CAREY: Have the administration officials simply said to you: ‘We can’t make any other accommodations on this?’

SISTER CAROL KEEHAN: No, no no. The administration has worked with great good faith to try to find a way to resolve this that works. However, all the good faith in the world doesn’t get past the challenge. And we still have some very real concerns in the church that even if you get rid of the coverage of contraceptives, [there may be] problems in the future.

So as we have talked consistently with the administration, we said, ‘We should just revisit this. Go back to what we first suggested to the administration, early on when this came up.’ And that is use the time-honored definition that the federal government has used to define religious organizations. Don’t make up a new one. And secondly, the government has plethora of programs that they use to make contraceptives available right now. If you want them available to women, please do it through a government program.

MARY AGNES CAREY: Do you have any sense that the administration is going to broaden the religious employer definition?

SISTER CAROL KEEHAN: Well it’s not really broadening it. It’s actually using one that’s already in federal law.  … You know Mary Agnes, I always hate it when people make great statements, and I’m the victim of it often, of what I think or what I’ll do or what I’m going to do. And honestly I don’t want to speak for the administration.

The purpose of a comment period is to give your best advice for what fixes the problem best, and we know that there’s the very strong contingent of folks who feel very strongly that every woman in this country should have access to contraceptives without any co-pay. We also know a fairly substantial viewpoint in the country is that religious organizations make a special contribution.

And so we tried to give our best advice on how both perspectives could be accommodated without walking over the other. We remain as committed as we ever were to the Affordable Care Act and to the preventive services. We think this is a huge step forward for women who are low-income. And it’s a huge step forward even for the economics of health care, because you catch a problem early, often times you save a life.

MARY AGNES CAREY: The bishops’ position was always very clear against a compromise. How did their stance influence the Catholic Hospital Association’s position on the issue?

We have to speak for our members. We formed our health reform position based on the teachings of the church around life and the dignity of people. And you look at the bishops’ statements, and you look at the statements of the pope, and they all talk about the importance of health care for everybody. But we don’t speak for the church, and we don’t address a lot of the broader issues that the church is looking at right now, because we don’t have the expertise. Our expertise is in the health care arena.

MARY AGNES CAREY: So there’s been no pressure by the bishops to get you to shift course on this particular issue of the compromise on contraception?

SISTER CAROL KEEHAN: They would love to see everybody saying exactly the same thing on the issue. And they understand that, quite frankly, we are where we are on it because we’re trying to work closely to get it changed. They’re working in one way, and we’re working in another.

But I would say we worry — and they worry — that people can portray us as at cross-purposes, when we really are not.

MARY AGNES CAREY: Your members represent the largest group of nonprofit health care providers in the nation. And often hospitals in a rural area will be the only major employer for miles. So what about the nurses or the technicians who work at one of your facilities if they’re not Catholic?

SISTER CAROL KEEHAN: That’s why in our letter we have said very clearly, give it to them through a government program. We’re not suggesting anything that would prevent them from getting contraceptive coverage. And we’re not saying only do it to the non-Catholics. We’re saying if you want everybody to have complete access, fine. But do it through a government program.

MARY AGNES CAREY: Do you think this debate over contraception provisions in the health law has been a distraction for the Catholic Church? Why isn’t the church embracing provisions in the law that would cover more people: the subsidies, the exchanges, the Medicaid expansion?

SISTER CAROL KEEHAN: I certainly think there are many people in the church that are embracing [these provisions]. And you haven’t heard the bishops ask to have it repealed. And you certainly know that CHA has been pounding the pavement like crazy, and we’re the arm of the church for health care.