The newest faculty member at the Uniformed Services University of the Health Sciences has a great smile — and a wagging tail.

Shetland, not quite 2 years old, is half golden retriever, half Labrador retriever. As of this fall, he is also a lieutenant commander in the Navy and a clinical instructor in the Department of Medical and Clinical Psychology at USUHS.

Among Shetland’s skills are “hugging” on command, picking up a fallen object as small as a cellphone and carrying around a small basket filled with candy for harried medical and graduate students who study at the military’s medical school campus in Bethesda, Md.

But Shetland’s job is to provide much more than smiles and a head to pat.

“He is here to teach, not just to lift people’s spirits and provide a little stress relief after exams,” said USUHS Dean Arthur Kellermann. He said students interacting with Shetland are learning “the value of animal-assisted therapy.”

The use of dogs trained to help their human partners has ballooned since studies in the 1980s and 1990s started to show how animals can benefit human health.

But helper dogs come in many varieties. Service dogs, like guide dogs for the blind, help people with disabilities live more independently. Therapy dogs can be household pets who visit people in hospitals, schools and nursing homes. And then there are highly trained working dogs, like the Belgian Malinois that recently helped run down Islamic State leader Abu Bakr al-Baghdadi.

Shetland is technically a “military facility dog,” trained to provide physical and mental assistance to patients as well as interact with a wide variety of people. His military commission does not entitle him to salutes from his human counterparts. 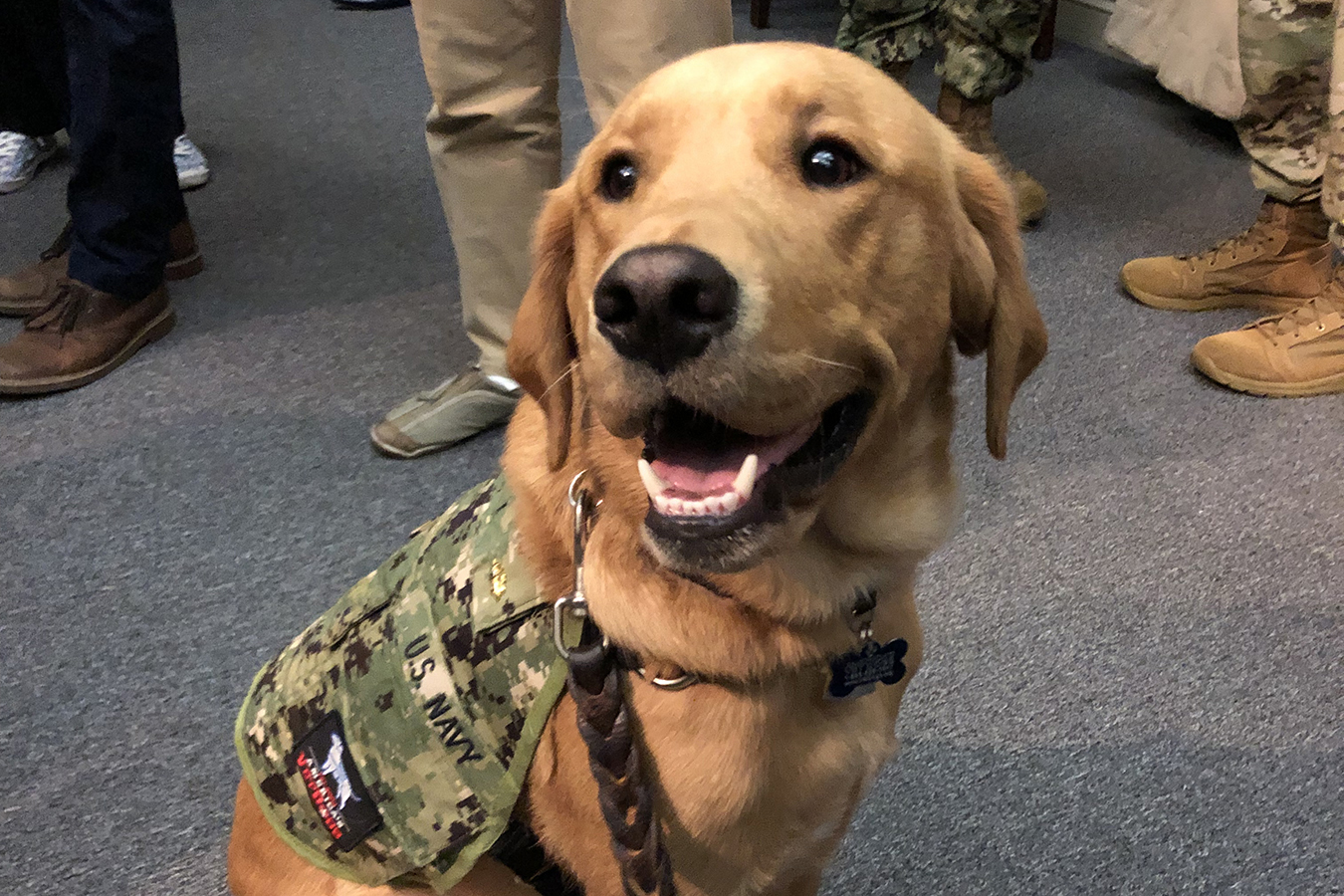 Although service dogs are commonly seen at the Uniformed Services University of the Health Sciences, Shetland, a retriever mix, is a clinical instructor in the Department of Medical and Clinical Psychology.(Julie Rovner/KHN)

“The ranks are a way of honoring the services [of the dogs] as well as strengthening the bond between the staff, patients and dogs here,” said Mary Constantino, deputy public affairs officer at Walter Reed National Military Medical Center.

The Walter Reed dogs, on campus since 2007, earn commissions in the Army, Navy, Air Force or Marines. They wear special vests designating their service and rank. The dogs visit and interact with patients in several medical units, as well as in physical and occupational therapy, and help boost morale for patients’ family members.

“Our students are going to work with therapy dogs in their careers, and they need to understand what [the dogs] can do and what they can’t do,” she said.

As in civilian life, the military has made significant use of animal-assisted therapy. “When you walk through pretty much any military treatment facility, you see therapy dogs walking around in clinics, in the hospitals, even in the ICUs,” said Moores. Dogs also play a key role in helping returning service members with post-traumatic stress disorder.

Students need to learn who “the right patient is for a dog, or some other therapy animal,” she said. “And by having Shetland here, we can incorporate that into the curriculum so it’s another tool the students know they have for their patients someday.”

The students, not surprisingly, are thrilled by their newest teacher.

Brelahn Wyatt, a second-year medical student, said the Walter Reed dogs used to visit the school’s 1,500 students and faculty fairly regularly, but “having Shetland here all the time is optimal.” And not just because of the hugs and candy.

Wyatt said the only thing she knew about service dogs before “is that you’re not supposed to pet them.” But Shetland acts as both a service dog and a therapy dog, so he can be petted.

That helps medical students see “there’s a difference. What does that difference look like in the health care setting?” said Wyatt.

Like his colleagues Sully and Dillon, Shetland was bred and trained by America’s VetDogs. The New York nonprofit provides dogs for “stress control” for active-duty military missions overseas, as well as service dogs for disabled veterans and civilian first responders. Many of the puppies are raised by a combination of prison inmates (during the week) and families (on the weekends), before returning to New York for formal service dog training. National Hockey League teams such as the Washington Capitals and New York Islanders also raise puppies for the organization.

Dogs can be particularly helpful in treating service members, said Valerie Cramer, manager of America’s VetDogs service dog program. “The military is thinking about resiliency. They’re thinking about well-being, about decompression in the combat zone.” Often people in pain won’t talk to another person but will open up in front of a dog. “It’s an opportunity to start a conversation as a behavioral health specialist,” she said.

While service dogs for individuals are trained to perform both physical tasks like picking up dropped items and emotional ones like waking a veteran having a nightmare, facility dogs like Shetland are special, Cramer said. “That dog has to work in all different environments with people who are under pressure. It can work for multiple handlers, it can go and visit people, can go visit hospital patients, can knock over bowling pins to entertain or spend time in bed with a child.”

The military rank for the dogs is no joke. They can be promoted ― as Dillon was from Army specialist to sergeant in 2018 ― or demoted for bad behavior.

Said Kellermann, “So far, Shetland has a perfect conduct record.”