Cammi Chase was thrilled to think she had solved the conundrum that is individual health insurance. Thanks to the Affordable Care Act and federal subsidies, last December Chase moved her family from an $800-a-month plan to one that cost about $240.

“I felt like we hit the jackpot,” she said. 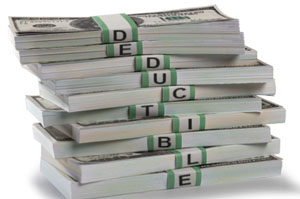 But last spring when Chase was struck with an unexpected illness, the Seattle woman was shocked to realize how little her new health insurance plan — a Health Savings Account (HSA) with a deductible of roughly $5,000 — would cover.

High-deductible and HSA plans are appealing because of their lower monthly premiums. But many consumers don’t realize how much money they’ll spend out-of-pocket with these plans through copays and coinsurance if they get sick. Despite being insured, this kind of coverage can drive people into debt or cause them to skip needed care for fear of unaffordable medical bills.

The problem isn’t likely to improve anytime soon. During the first open enrollment to purchase insurance from online health marketplaces under the ACA, more than one-third of the 150,000 individual policies sold through Washington’s Healthplanfinder exchange were “bronze” level plans with more limited coverage. The plans for 2015 with the highest deductibles will require a consumer to spend $6,600 (with some exceptions), before an insurance company starts paying the full cost of their health-care bills.

“People aren’t able to afford the copays and out-of-pockets,” said state Rep. Joe Schmick, a Republican, and ranking minority member of the House Health Care and Wellness Committee. Folks say to him: “Do I really have insurance when I have to pay this much out of my pocket? It doesn’t feel that way.”

In a recent survey of 1,004 insured Americans, more than one-quarter said they had a high-deductible plan. Almost 30 percent of them said they hadn’t gone to the doctor when they were sick because of the costs they’d have to pay, according to the poll taken by The Associated Press-NORC Center for Public Affairs Research.

The American Academy of Pediatrics this spring suggested that high-deductible plans should not be sold to cover children out of concern that some families would forgo needed care.

So far, the high-deductible plans have not resulted in more unpaid patient bills at Washington hospitals. Reports to the state’s Department of Health show that bad debt at hospitals has, in fact, decreased this year compared with last.

“It seems like the issue is growing and getting even more commonplace with the high deductibles and more out-of-pocket costs for patients,” said Karen Johnson, a spokeswoman with The Polyclinic, an organization of Puget Sound providers.

In response, Polyclinic is promoting a deferred deductible program in which patients will be able to pay their medical bills over 12 months with 1 percent interest. If they pay the bill within three months, the interest is dropped.

Johnson said Polyclinic historically has accommodated patients struggling financially, but “we want to be more upfront about it,” she said. “We want to be clear that we’re offering it” and “take the stigma out of it a little bit.”

State officials and others are trying to help people choose insurance that better meets their needs so they don’t wind up with unaffordable medical bills. During this second round of insurance enrollment, which started Nov. 15 and ends Feb. 15, the state’s insurance exchange is promoting videos and outreach materials explaining key insurance terms.

The exchange, which operates the Washington Healthplanfinder website, is encouraging people to use insurance brokers who give advice on plans. Brokers offer their services free and receive a commission from insurance companies.

“People are realizing that just because the premium was low, if they have to go to the doctor or have maintenance medication, those plans are not the best,” said Thea Feltzs, an insurance broker in Gig Harbor.

Chase and her husband are self-employed, and their income is modest enough that they qualified for a federal subsidy that lowered the cost of the LifeWise HSA insurance plan she bought through the state’s exchange. Their 7-year-old daughter is covered through Medicaid.

“I heard from the rumor mill that an HSA was the way to go because I’m self-insured,” Chase said. “I was really banking that my health would be good.”

In the spring, after experiencing memory problems and swollen joints, Chase was diagnosed with latent Lyme disease.

“Immediately it included a lot of [doctor’s] visits and a lot of medication and monthly tests and lab work,” Chase said. And most of it wasn’t covered by her plan. “Every time I walk in I pay for the office visit, which is $165 each month.”

A financial person at her doctor’s office referred Chase to Sarah Freeman, a Seattle insurance broker who helped her find a new plan for next year. At $325 a month, the Premera Blue Cross plan she found costs a little more than her current plan, but it will pay more of her bills.

For now the family can afford the higher premiums, Chase said, but “I just hope it doesn’t continue to rise.”

Despite the risks, Feltzs predicted the cheaper plans with higher deductibles will still be popular.

“I sell them all day because those plans do work for people who say they don’t go to the doctor or they rarely go,” said the broker. “They say, ‘I want to avoid the penalty [for being uninsured] and in the event that something does happen, I don’t want to break the bank.’ ”

Skipped Care A Side Effect Of High-Deductible Health Plans