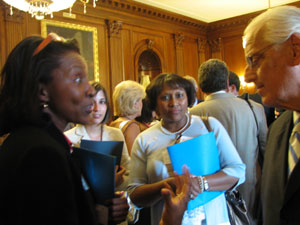 On most days, Kelly Conklin is in his workshop in Bloomfield, N.J., supervising his 12 employees as they design wood accents and cabinets for nearby Manhattan offices.

But on a balmy day in June, the 56-year-old Conklin became a lobbyist, if only for a few hours. He swept through Capitol Hill, dropping in on the offices of five House members and two Senators. The next day, he testified before the House Energy and Commerce Committee’s subcommittee on health.

Conklin, one of 60 small business owners from across the country who visited Washington, is a member of the Main Street Alliance, a business group that backs such Democratic-supported health overhaul ideas as a government-sponsored health insurance plan and a requirement that employers provide insurance to their workers or pay a penalty. For Conklin, who pays a hefty $4,700 a month to cover his workers with what he considers a shoddy health plan, the inclusion of these concepts in a reform package is “nonnegotiable.”

While MSA is one of the newest small business advocacy groups on Capitol Hill, it is far from alone in its recent lobbying push. As more specific legislative language emerges, other small business organizations are encouraging members to make their views known through e-mails, letters, phone calls and personal visits.

The message is a decidedly mixed one. Small business, a powerful constituency in every congressional district, no longer speaks with one voice on health care.

Many of the bigger and more powerful groups that represent small businesses, including the National Federation of Independent Business (NFIB) and the U.S. Chamber of Commerce, have long been allied with Republicans and are lobbying hard against the public option and the employer mandate.

“The absence of unified opposition from the small-business community is meaningful,” says Thomas E. Mann, a senior fellow in governance studies at the Brookings Institution. When all of small business rallies against a proposal, he says, it makes lawmakers who are on the fence “exceptionally wary” of going against the crowd.

Small business groups have traditionally opposed government control or intervention in employer-sponsored private insurance. That’s the view of the Chamber of Commerce, whose members have sent more than 50,000 letters to Capitol Hill on the health care overhaul proposals. 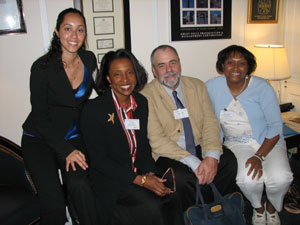 James P. Gelfand, the chamber’s senior manager for health policy, says members don’t need much prodding. “When we told them about this legislation, they lost it. They were furious. I don’t even have to tell them, please call your congressman, because let me tell you, when they hung up that phone, I think they did it on their own.”

Last week, the U.S. Chamber of Commerce held a conference call with more than 200 business owners from state and local chambers to “urge action on health reform” and explain “what the local folks can be doing to help make sure the voice of business is heard during the process.”

The NFIB has already begun its own grassroots campaign. A recent NFIB e-mail generated nearly 1,500 letters to the Capitol from small business owners opposing an employer mandate. “Everybody is pretty plugged into watching health care go, and our guys have been ginned up for 20 years,” says NFIB spokeswoman Stephanie Cathcart.

The NFIB also hosted a series of meetings with legislators in their districts over the July 4th recess. Brad Eiffert, who owns a lumber company in Columbia, Mo., attended a meeting with Rep. Blaine Luetkemeyer, R-Mo.

Eiffert had been satisfied with the insurance he offers his 30 employees, but as homebuilding has slowed, lumber sales declined, and he could no longer afford to provide traditional coverage. He switched to health savings accounts this year. As an employer, Eiffert says he would “really like to be out of the insurance business. I don’t mind providing a stipend or something, but I would like employees to be able to make their own decisions.”

He is strongly opposed to an employer mandate, which he says is “invasive in how an individual (employer) makes a decision” on whether to provide insurance to employees. Eiffert says he went to the two-hour event “to make sure our story was part of the dialogue” and was happy that Luetkemeyer seemed to understand the situation for small businesses.

In New Jersey, public-plan supporter Kelly Conklin has been canvassing door-to-door to drum up support from other small business owners. He attended a town hall meeting in Montclair, participated in his congressman’s advisory committee on health care and has written several letters to his legislators. When they met in Washington, Rep. Bill Pascrell, D-N.J., greeted Conklin by name and assured him of his support for the public option.

Brookings’ Mann says grassroots communications from either side of the small business divide may not be the “crucial element” in determining the outcome of the overhaul battle, especially if one side ends up dominating the debate. “But at the margin, in a close vote,” he says, “it could make a difference.”