One of the key features of the new health law is expanding health coverage to 33 million Americans who currently have no insurance. Helping the uninsured and underserved find health care has been a long-time goal of Dr. Herbert Smitherman, assistant dean of community and urban health at Wayne State University School of Medicine in Detroit. Smitherman is also president of a local community health center. 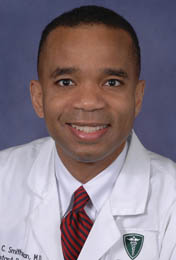 He spoke recently with KHN’s Jenny Gold about his efforts to improve care for the underserved in Detroit and how the new coverage expansion might affect this population. This is an edited version of his comments.

One of the projects you’re known for is the Voices of Detroit Initiative, a project to move underserved patients out of emergency rooms and into doctors’ offices. Over five years, you tracked the care of 33,000 uninsured patients and managed to transition 55 percent of them into medical home settings where their care is coordinated and is less expensive. How did you do that, and what were some of the hurdles you faced?

The simple project we did is we put outreach workers and patient navigators and community outreach workers in every emergency room within our county [which encompasses all of Detroit]. When a person showed up who was uninsured, we would ask if they would be willing to enroll in the Voices of Detroit program. We would give them access to a primary care physician at significantly reduced costs, if they allowed us to track their care.

We did everything, used every resource we could to get that person to the first visit with a primary care physician because we knew that once we got them to the provider, their likelihood of staying with that provider was high. [We got] people out of a high-cost setting at an average of $1,000 per visit into a primary care practice at $30 a visit.

What’s it like at the Health Centers Detroit Foundation where you work?

About 75-percent of our patients either have Medicaid or are uninsured. The average family income is about $10,851 per year. About 64 percent of our population made less than $12,000 a year. So it’s a poor population socioeconomically. It’s a population that has significant and high amounts of chronic illness.

It is a very difficult population because often, when we want to adjust things and I want to prescribe a medication, they’re uninsured. People are literally having strokes and heart attacks because they can’t get access to a very simple medication. It is 50 times more costly to deal with that. It’s very frustrating as a practitioner that we don’t have the basic access to insurance products, etc. for people to cover their basic needs.

I’d say two out of three deaths in my state and in my city are due either to cardiovascular disease, cancer, stroke, diabetes or chronic obstructive lung disease. Most of those are not only common in the population I deal with but also very preventable with very basic care. If we implement that care, we will save literally billions of dollars as a nation.

How will the health care overhaul affect the access this population has to health care?

Health care reform will be huge. We’re talking about 33 million people who are going to be brought into the fold of coverage. About 56 percent of all those who are uninsured are people of color. Obviously, Detroit is 89 percent African American. So they’ll be tremendously impacted by additional health insurance to help cover the cost of care.

[With the expansion of Medicaid and the subsidies for low-income residents to buy policies on the new exchanges, these patients] have a mechanism to get sub-specialty care because they have insurance to get their medications, to not go into bankruptcy with simply one admission.

I had a woman who was uninsured and was admitted for five days for pneumonia. We cared for her. We cured her pneumonia, which is the sixth leading cause of death in the United States, treated it perfectly fine. She did well, but came out with a $28,000 bill. She had no health insurance and $28,000 is bankrupting her. This is what people are coming out of hospitals with.

They’re just getting care in the most expensive arena and that’s hospitals and emergency rooms at 10 to 20 times the cost. People always say, “Well, is that my problem?” I always tell people in the audience, all those who are insured raise your hand. When they raise their hand, I say all those who just raised their hand, you’re paying $1,200 to $2,000 in your premiums to cover the uninsured.

It’s a struggle because Medicaid pays 30 cents on the dollar.

The health overhaul added about $11 billion to expand community health centers. Unfortunately the recent [2011] budget deal cut some of that.

We also need to build up the primary care and provider capacity to be able to handle the expansion. My understanding is they were talking about trying to expand reimbursement for primary care physicians by 10 percent. Given the huge disparity in reimbursement for primary care physicians and sub-specialists, that’s not going to be enough to really change the needle – get kids who are graduating from medical school interested in primary care specialties. We’re going to have to do a little bit more equalization with respect to the reimbursements but the challenges in non-urban and probably non-rural communities will remain.