When the woman stopped by Phil Munson’s stall at a Rochester, N.Y., farmers market recently, he noticed a change. A regular customer, she browsed his Fisher Hill Farm vegetables as usual and selected a few to buy. But this time, instead of offering cash for her produce, the woman paid with the wooden tokens available for people using Supplemental Nutrition Assistance Program (SNAP) benefits, formerly known as food stamps.

Because the market accepts SNAP benefits, the woman could make her regular purchases with no difficulty. She also qualified for New York’s FreshConnect program, an incentive for SNAP beneficiaries to improve their access to fresh food. So, she got an extra $2 for every $5 she spent at the market, boosting her purchasing power by 40 percent.

Munson said the customer bought eggs that day in addition to her usual vegetables.

“She was really happy to get the benefit,” Munson recalled. “She said, ‘I can’t believe how much they gave me.’”

Federal and local officials have long said they are eager to get farmers’ produce to low-income families’ dinner tables, but for people like Munson’s customer, the ability to use SNAP benefits in the future is uncertain. While using food stamps to purchase  vegetables at a farmer’s stall may seem like a simple exchange, it depends on complex government contracting requirements and increasingly sophisticated technology.

A change this year in federal contracts has left some market operators and advocates nervous. The company that provided the technology used by roughly 1,700 of the more than 7,000 farmers markets that accept SNAP benefits said it is pulling out of the business.

Earlier this year, federal officials announced they had picked a new contractor to provide equipment to help expand the number of markets that handle SNAP transactions. That contractor, when choosing the companies it would work with, did not include the Novo Dia Group, whose “Mobil Market+” app is used by those markets. Following that, Novo Dia announced it would, as of the end of July, no longer provide that service even to existing clients.

The announcement, coming at the height of the market season, took many operators and advocates by surprise and set off an urgent scramble to avoid a disruption in service. The National Association of Farmers’ Market Nutrition Programs stepped in to fund the processing platform’s operations for one month, and New York Gov. Andrew Cuomo later announced a short-term agreement with the company to provide service nationally through the end of February.

What happens after that remains unclear.

For some farmers, SNAP customers make up an important part of their market business.

“I think it would be noticed if it went away,” said Anita Amsler, whose family sells produce and eggs from their Oldhome Farm at the Rochester Public Market year-round.

Some advocates, however, see the current situation as an opportunity to improve the long-term prospects for the acceptance of SNAP and other nutrition benefits at farmers markets.

“A crisis is a terrible thing to waste,” said David Sandman, president and CEO of the New York State Health Foundation, who has written about the SNAP processing problems. He said his organization and others are interested in options for continuing to make the Nova Dia app available nationally through a public-private partnership. 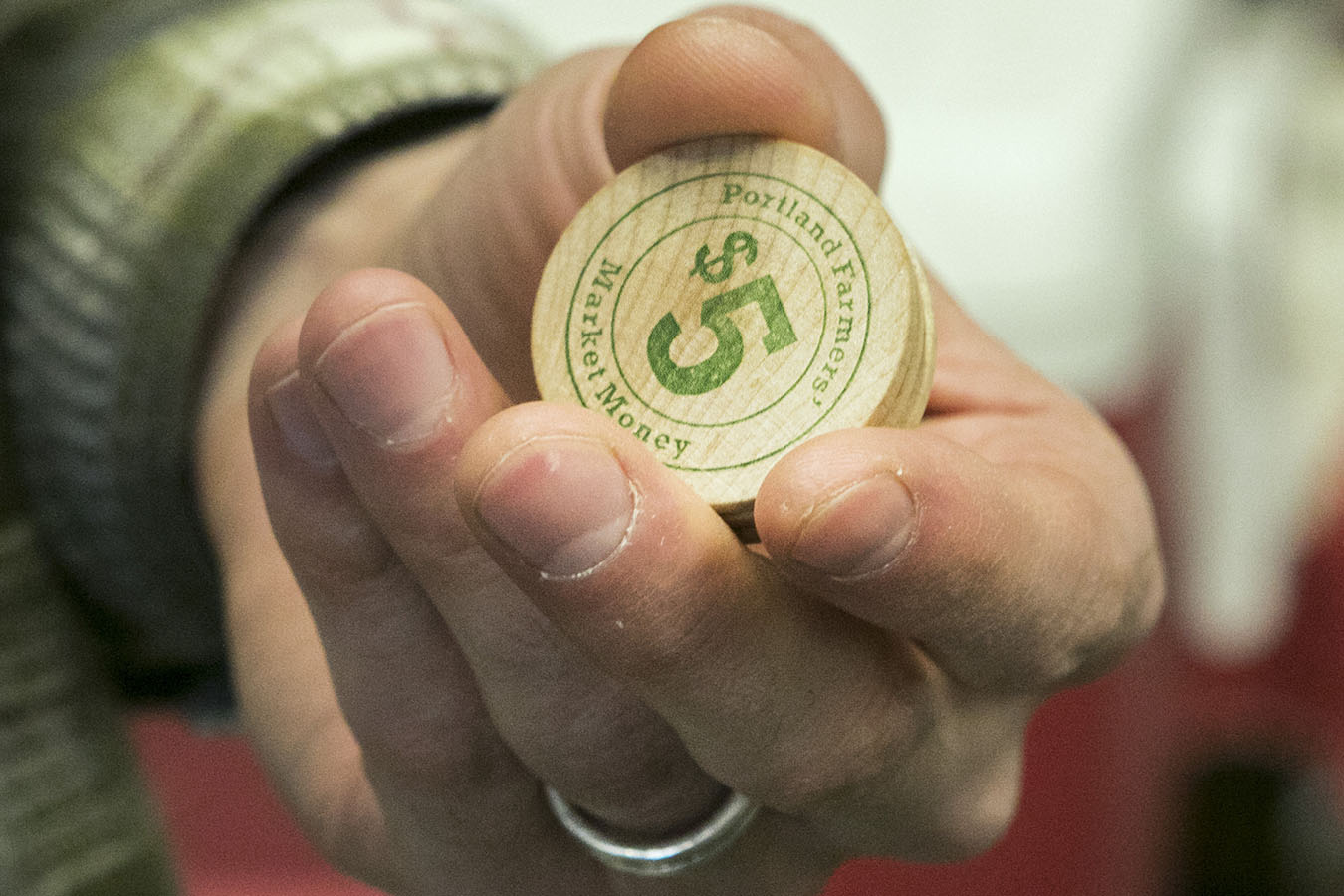 The markets’ popularity among SNAP users is growing. SNAP benefit redemptions by farmers and markets grew by more than a third from 2012 to 2017, to $22.4 million, according to the U.S. Department of Agriculture.

“They are important touchstones and places for people to access their food the way other consumers do,” said Ellen Vollinger, legal director at the Food Research & Action Center, an advocacy group that works to reduce hunger among the poor.

When farmers market customers want to use SNAP benefits, their first stop is typically at a central market office — like a tent or a trailer — to swipe their SNAP electronic benefits card for whatever amount they want to spend. They are generally given wooden tokens or paper scrip in small denominations of $1 or $5 to spend at the market. They may also get incentive coupons — like those from New York’s FreshConnect program — to boost their purchasing power.

The USDA’s Food and Nutrition Service, which oversees SNAP at the federal level, has long championed farmers markets as an important way to provide people with nutritious food while also supporting farmers economically.

Every few years, that agency awards a contract to a firm to manage the wireless processing equipment program for farmers markets and farmers who want to begin accepting SNAP benefits. In March, it selected Financial Transaction Management of Reston, Va.

The Farmers Market Coalition, the previous contractor, had offered equipment to markets through three providers, including Novo Dia.

The new contractor opted not to work with Novo Dia. When choosing equipment options, Financial Transaction Management focused on cost effectiveness and compliance with standards that protect farmers markets from liability in the event of a data breach, said CEO Angela Sparrow by email.

“It did throw Novo Dia into a tailspin,” said Diane Eggert, executive director of the Farmers Market Federation of New York, who helped put the stopgap funding for the company in place and is seeking a long-term solution. “They needed to continue growing to maintain operations.”

Novo Dia didn’t respond to a request for comment.

The Mobile Market+ app works with a smartphone to enable processing of SNAP benefits. The smartphone technology enhances markets’ ability to track sales and transactions through the app and allows for frequent technology updates, Eggert said.

Financial Transaction Management is processing applications from farmers markets for its equipment. As of Sept. 24, 140 applications were in the review-and-approval process, and 46 pieces of equipment had shipped, according to USDA officials.

The Food and Nutrition Service said it is interested in modernizing its approach. It wants to employ a “bring your own device” model for the market operators who want to begin processing SNAP in which “markets and farmers would use a smartphone and FNS would facilitate provision of [an] app,” officials said.

To that end, the USDA is testing a mobile application and encryption device that could be used with a smartphone to accept SNAP benefits. The new app, which will require a separate PIN-encryption device, is “not as streamlined” as the Novo Dia app, according to USDA officials. Still, “this is an option that could provide additional flexibility for farmers and markets while also reducing cost to the federal government.”

That option may be available by year’s end.

In addition to federal efforts to promote SNAP purchases at farmers markets, some states, such as California, have taken an active role in providing their markets with free wireless equipment to process transactions.

But the current upheaval has sown uncertainty among many farmers markets about their ability to handle SNAP transactions next year.