DENVER — Hundreds of Colorado doctors are charging Medicare far more than is typical for routine patient visits, according to a new database .

The numbers could reveal fraud. But experts caution that the raw data alone could also make physicians who are doing nothing wrong look bad.

Findings are based on an analysis of a database assembled by ProPublica, an independent, nonprofit newsroom. The data show payments made according to the system of codes for routine office visits doctors use to bill Medicare and insurance companies. 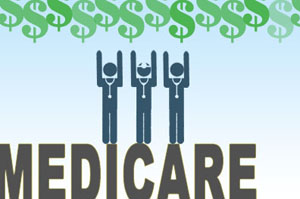 Office visits are reimbursed on a scale between one and five, with five being the most intensive and costly. So, a quick, easy visit should be coded at level one, meaning a relatively small payment.  A level five charge is meant for the longest and most difficult visits, which are also paid at a higher rate.

The national average for providers who bill Medicare Part B at the highest level is 4 percent. In Colorado, the average grows to 5.4 percent.

Dr. Aris Sophocles, who practices in Denver, says anyone who bills at the highest level frequently deserves an investigation.

“It could mean that someone’s gaming the system and overcharging Medicare,” Sophocles says.

Sophocles teaches medical coding to medical students and doctors. He also works as an attorney, helping to defend doctors accused of improper coding.

What’s especially curious to Sophocles are doctors who bill at the highest level for 100 percent of their Medicare patients.

“I expect physicians to see both complex patients and simpler patients,” Sophocles says. “I expect them also to have longer initial office visits, but the majority of subsequent visits being shorter.”

In 2012, the most recent data available, 71 Colorado health care providers billed at the highest level 100 percent of the time. Sophocles says that figure could reveal fraud, but cautions that it also might not. He says each of those doctors deserve an opportunity to explain why their billing rates are so far outside the norm.

Kaiser Health News attempted to contact 15 Colorado doctors who billed 100 percent of Medicare office visits at the highest level. Most of them didn’t return our phone calls. But several did, including Dr. Marilyn Levi, the director of transplant infectious disease at the University of Colorado at Denver.

Levi says she’s justified in billing all of her Medicare office visits at the highest level because she works at Colorado’s only academic medical center. It’s the place other hospitals all over the region send some of their toughest patients.

“The time that is required to take care of them is longer than some of the other specialties in infectious disease,” Levi says.  “That’s the reason for the longer time periods required for their evaluation and treatment, and that results in the higher coding.”

That kind of information isn’t obvious in the huge trove of Medicare payment data that was made public for the first time in April 2014.

The American Medical Association fought public interest groups pushing for its release for years because properly interpreting billing codes can be complicated. Dr. Levi is concerned people will misinterpret them.

“There has to be an understanding and recognition of specialty care that is provided in only a few places.” Levi says. “I think it’s dangerous to lump everyone together and base everything on a code.”

Price transparency is a goal

“I think consumers should be aware of the costs of the care that they’re receiving,” Cohen says.  “The caveat is, when they evaluate physician-to-physician, they have to be certain they understand the patient mix that any given physician sees. Their coding may be very appropriate even though it’s higher than another physician they’re comparing to.”

Sophocles agrees, but he says some specialists are more likely than others to have a mix of mostly complex cases that justifies billing at a high rate most of the time.

“When I see someone in family medicine [billing frequently at the highest level], I get suspicious,” Sophocles says. He also says the same is true for other specialties, such as general internal medicine, otolaryngology and gastroenterology.

Medicare tells ProPublica it would be “highly unusual” for a doctor to bill at the highest level 100 percent of the time. The agency audits doctors, and those who don’t code properly.  They can be required to pay Medicare back – and may face jail time.

Those consequences, Dr. Sophocles says, cause a lot of doctors to bill less than they maybe should, a practice called undercoding.

“Some, though, are either unaware or unafraid,” Sophocles says.  “They tend to overcode anyhow. The release of this database may indicate who those people are.”

Some Colorado Doctors May Be Overcharging Medicare For Routine Visits