Four Florida insurers allegedly discriminate against people with HIV/AIDS by structuring their prescription drug benefits so that patients are discouraged from enrolling, according to a recent complaint filed with federal officials.

The complaint, filed with the Office for Civil Rights at the federal Department of Health and Human Services, claims that the insurers—CoventryOne, Cigna, Humana and Preferred Medical—violated the health law and federal civil rights laws by placing all covered HIV/AIDS drugs, including generics, in the highest drug tiers that require significant patient cost sharing. The complaint was made by the AIDS Institute and the National Health Law Program, which are health advocacy organizations.

Under the health law, insurers are prohibited from rejecting customers because of medical conditions. They also cannot offer plans with benefit designs that discriminate based on someone’s degree of disability, health conditions, or expected length of life, among other things. 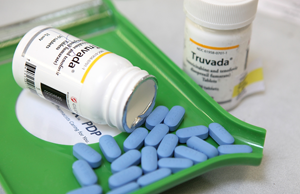 Insurers are trying to shield themselves from adverse selection, says Mendelson. Now that the health law prohibits insurers from rejecting people with serious health conditions, “if your benefit is more generous than others you’ll get everyone with that illness,” he explains.

For the Florida complaint, the AIDS Institute analyzed all 36 silver-level plans offered through the health insurance marketplace in the state. (Silver plans are popular on the marketplaces in part because they offer the greatest opportunity for subsidies for lower-income people.) In addition to high cost sharing for the drugs that are used to treat HIV/AIDS, the analysis found that some plans also require doctors to request prior authorization from the insurer for coverage of HIV drugs or place quantity limits on prescriptions.

The analysis found, for example, that CoventryOne places all HIV drugs in the highest Tier 5, with a $1,000 deductible for prescriptions followed by 40 percent coinsurance. In contrast, Blue Cross, the insurer with the largest share of silver plans in Florida, places most HIV drugs in Tier 1 or Tier 2, with flat copayments ranging from $10 to $25 for Tier 1 and $40 to $70 for Tier 2, sometimes following a deductible, according to the analysis.

Coinsurance charges for high-tier drugs in the four insurers’ plans could add up to $1,000 a month or more for some patients, says Carl Schmid, deputy executive director of the AIDS Institute.

“It’s not good for patients,” says Schmid. “People aren’t picking up their meds” because they can’t afford them.

Antiretroviral drug therapy, typically a combination of three or more drugs, is recommended for people who are infected with HIV, the virus the causes AIDs.

The insurers say they’re in compliance with the law.

“Preferred Medical’s coverage of HIV medications meets the requirements for coverage established by federal guidelines,” says James Card, a spokesperson for that insurer.

The federal Centers for Medicare & Medicaid Services says it will keep tabs on discriminatory cost-sharing by conducting “outlier” analyses as part of the application process to sell plans on the federally facilitated marketplace, through which Florida and 26 other states sell plans.

“That’s not good enough for us,” says Schmid.

“A state insurance regulator doesn’t have the clinical expertise to know whether the common HIV drugs are covered and how they should be covered on a formulary,” says Katie Keith, director of research at the Trimpa Group, a consulting firm that works on lesbian, gay, bisexual and transgender issues. “That’s why you need strong federal guidelines.”

Patients with HIV/AIDS are in a tough spot, say advocates. Even  though the health law caps total out-of-pocket spending at $6,350 in 2014, many of these patients are low income and coming up with $1,000 for a month’s worth of drugs is more than they can afford.

Advocates say they’re trying a number of different strategies to help HIV/AIDS patients. If they can show that someone got inaccurate information about a plan from a health insurance assister who helped them sign up, they may qualify for a special enrollment period that enables them to switch plans outside the regular enrollment period, says Vicki Tucci, a lawyer with the Legal Aid Society of Palm Beach County.

Tucci says she’s aware of up to 40 people who have contacted her office  after signing up with plans that placed HIV/AIDs drugs in the highest tier. Sometimes formulary information wasn’t available until after they signed up, she says.

If they can’t switch plans, Tucci says her organization can sometimes get funds from the federal Ryan White HIV/AIDS Program to pay for covered medications. As a last resort, they have disenrolled people from health plans so that they can qualify HIV/AIDS medication assistance that is available only to uninsured or underinsured people.

“When we pull them off, they can go to the clinics and get their HIV care, but if they end up in the hospital because of diabetes or a stroke, they don’t have health coverage,” says Tucci.