Most people diagnosed with cancer want to start treatment as soon as possible, for fear that delaying care will allow their tumor to grow out of control.

So Terry DeBonis’ approach to treating her thyroid cancer might seem surprising. Although she was diagnosed with cancer four years ago, she still hasn’t begun treatment.

Instead of removing her tumor immediately — the traditional approach — DeBonis and her doctor decided to wait and watch her cancer, monitoring it with ultrasounds every six months. DeBonis opted to consider surgery only if her tumor grew significantly bigger.

DeBonis, 55, said she had good reason to avoid surgery. She endured two painful surgeries on her collarbone related to a car accident just a year before her cancer diagnosis.

“There are risks and complications with every surgery,” said DeBonis, a nurse in Glen Rock, N.J. “I didn’t want to put myself through that.”

In Tuttle’s study, 291 patients whose tumors were considered “low-risk” opted for a watch-and-wait approach. Doctors recommended that anyone whose tumors grew more than 3 millimeters ­— about the smallest change visible on an ultrasound ­— consider surgery.

Interestingly, 19 patients saw their tumors shrink by at least half, the study said. “I would not have guessed that would happen in a million years,” Tuttle said.

In the end, only 10 patients opted to have surgery, according to the study.

Older patients were the least likely to see their tumors grow, Tuttle said.

Patients in their 20s and 30s have a 10 to 15 percent chance that their tumors will grow within two years, while people over age 60 have a 1 to 2 percent risk, he said. Cancer is primarily a disease of aging.

Many thyroid tumors today are found when they’re too small to be felt or cause symptoms. Instead, doctors find these tiny cancers accidentally, while performing a CT scan or ultrasound for some other reason.

DeBonis said her cancer was found when her endocrinologist, who has treated her for an underactive thyroid for many years, decided to perform an ultrasound. A biopsy, in which doctors remove a small sample of tissue, found cancer. 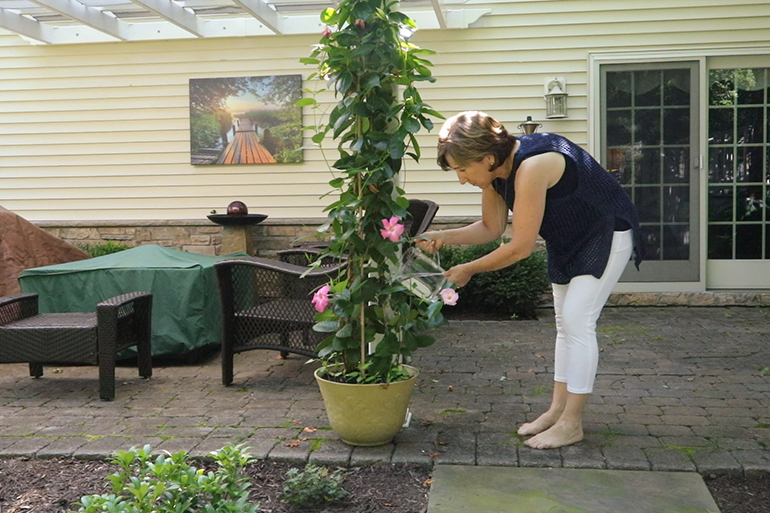 DeBonis says she has good reason to avoid surgery to treat her thyroid tumor. She endured two painful surgeries on her collarbone related to a car accident just a year before her cancer diagnosis. (Courtesy of Memorial Sloan Kettering)

The incidence of thyroid cancer nearly tripled from 1975 to 2009, according to a 2014 study, with almost all of this increase coming from papillary thyroid cancer, the slowest-growing type. Yet mortality from thyroid cancer hasn’t changed. That suggests that doctors are detecting many harmless cancers, added Dr. Joseph Scharpf, an otolaryngologist at the Cleveland Clinic Foundation, in an accompanying editorial.

Autopsy studies suggest that about 10 percent of Americans have an undiagnosed thyroid cancer, most of which never cause harm, Tuttle said.

According to the American Cancer Society, an estimated 56,870 new cases of thyroid cancer will be diagnosed this year, and 2,010 Americans will die from it. About 3 in 4 thyroid cancer cases are in women.

“We’ve been treating things that I don’t think needed to be treated,” Tuttle said.

Removing the thyroid leaves patients dependent on thyroid replacement hormones for the rest of their lives. Many of these patients complain of weight gain and fatigue, saying they just don’t feel like themselves, Tuttle said.

Five years ago, based on encouraging research from Japan, Memorial Sloan Kettering decided it was safe to allow some patients with low-risk tumors to delay surgery, Tuttle said. Doctors still recommend immediate surgery for patients whose tumors are larger, more aggressive or which have spread outside the thyroid gland.

Until now, however, most U.S. doctors did not know if watching and waiting would be safe, Tuttle said.

Most of the patients in the new study shouldn’t have even had a biopsy, Scharpf wrote. That’s because the American Thyroid Association recommends against performing needle biopsies on thyroid tumors under 10 millimeters.

Some patients say they still want their doctors to treat their thyroids more aggressively.

Katie Brown, 44, survived cervical cancer at 22 and lost her father to lung cancer. So, when her doctor noticed several small growths on her thyroid — detected while monitoring a liver condition — Brown was concerned. When a biopsy failed to obtain any usable tissue, her doctor suggested taking a watch-and-wait approach. Brown, who lives near Dallas, said she’d prefer to have another biopsy sooner rather than later.

“I hate the waiting,” Brown said.