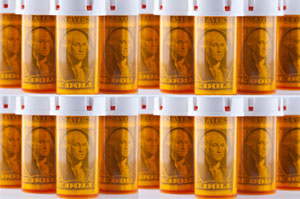 If all 3 million people estimated to be infected with the virus in America are treated at an average cost of $100,000 each, the amount the U.S. spends on prescription drugs would double, from about $300 billion in one year to more than $600 billion.

That prospect has inspired an unusually blunt public debate:  Should expensive treatments – one new drug costs $1,000 a pill — be limited only to the sickest patients, or is it appropriate to treat all who want the drugs immediately? And should those in taxpayer-funded programs have the same access?

“These are, at their core, ethical fights,” said Arthur Caplan, director of the division of bioethics at New York University Langone Medical Center.

The issues are especially contentious because the drugs, Sovaldi by Gilead Sciences and Olysio by Janssen Therapeutics, are an advance in treatment and offer a cure for many people; they are not just medicines that ease symptoms or extend life for a few months.

“The more definitive the cure, the closer we are to asking, ‘What’s the value of a human life?’” said Tony Keck, director of Medicaid in South Carolina where the treatments are being covered case by case.

This is not an isolated predicament. Already, specialty drugs account for less than 1 percent of all prescriptions but more than a quarter of spending. Other high-cost specialty medicines in the pipeline include treatments for high cholesterol and diabetes, which affect tens of millions of people.

“This is the tip of the iceberg,” said Steven Pearson, president of the nonprofit Institute for Clinical and Economic Review, which analyzes the effectiveness of new treatments. “We have about a year or two as a country to sort this out” before more specialty drugs hit the market.

For now, though, the question is how broadly public and private insurers will make the hepatitis drugs available.

As they draft their guidelines, many are considering recommendations from expert groups.

Early this year, a panel from the American Association for the Study of Liver Diseases and the Infectious Diseases Society of America said the new drugs should be the preferred treatments for most of those infected with virus. The 28-member group, a majority of whom received drug industry financing directly or through their research institutions, did not set any criteria for which patients should get the treatment first.

“We just put down the best regimen for the individual,” said Gary Davis, a hepatitis expert and panel co-chairman. “We recognize cost issues are really important, but we are clinicians, not the people who should be addressing that.”

But in April, a panel for the Department of Veterans Affairs— none of whose members reported financial ties with the drug industry —offered a different take:  It suggested doctors use the drugs mostly for patients with advanced liver disease, including those awaiting transplants. The VA panel said most patients at earlier stages of the disease should consider waiting for drugs now in development that may prove superior. Analysts expect those drugs to be available within the next year or two.

Sovaldi and Olysio “should be used because they have a high clinical benefit, but not everyone needs to be treated immediately,” said Rena Fox, a VA panelist and professor of medicine at the University of California at San Francisco.

Recommendations to prioritize treatment for those with advanced liver disease were also made by the California Technology Assessment Forum, a panel sponsored by the Blue Shield of California Foundation that advises insurers, providers and patients.

They noted that drugs expected out as early as this fall may prove superior because they will not require the use of interferon, a drug that can have debilitating side effects.

Even so, Ryan Clary, executive director of the National Viral Hepatitis Roundtable, a patient group, lambastes such limits
as “absolutely, rationing.” His group, which receives funding from the drug industry, wants the treatments to be broadly available.

“There are plenty of reasons a person with hepatitis C would like to have the virus out of their body,” he said. “To say, ‘We want you to hold off until you start to get sick,’ is really problematic.”

The hepatitis drugs are not the most expensive drugs on the market, but their prices are of concern because of the large number of people infected with the virus.

Drugmakers defend the pricing, saying the treatments are curative, and can prevent the need for other costly care, such as liver transplants.

“Gilead believes that the price of Sovaldi is fair based on the value it represents to a larger number of patients,” Gilead spokeswoman Michele Rest said.

Demand has been strong so far. On April 22, Gilead reported that Sovaldi sales hit $2.3 billion in the first three months of the year, a record-breaking launch for a drug.

Insurers and consumer advocates hope increased competition will result in lower prices for the next round of hepatitis C drugs expected out later this year and next, but that is by no means guaranteed.

No one expects all those infected with the hepatitis C virus to seek treatment: At present, most people with the virus don’t even know they have it, one of the reasons why fewer than 20 percent have sought treatment with the older regimens.

More patients are expected to be diagnosed, however, as health officials urge baby boomers to get tested. The blood-borne virus is spread mainly by intravenous drug use, although many people were unknowingly infected by poorly sterilized medical equipment and blood transfusions before widespread screening of the blood supply began in 1992.

Policymakers say the cost of treating even half of those infected could raise premiums for everyone with private insurance.

In an earnings call last month, UnitedHealthcare, one of the nation’s largest insurers, said it spent $100 million on hepatitis
C treatments in the first quarter of the year, far more than it had expected.

Like many private insurers, United covers the drug broadly, following medical societies’ recommendations, although some of its plans may charge patients higher co-payments for the drugs.

Another firm, MedImpact, which oversees pharmacy benefits for tens of thousands of people, saw its spending on hepatitis treatments nearly double this year to $37 million, when compared with the first quarter of 2013.

A Dilemma For Medicaid Programs

Because many of those infected are low-income, in prison or baby boomers, the spending is expected to fall hardest on taxpayer-funded health programs such as Medicaid and Medicare.

This “has the potential to throw a wrench into short-term state budgets,” said Matt Salo, executive director of the National Association of Medicaid Directors.

Medicaid programs, for the most part, are still setting coverage rules, relying on their own panels to review medical studies and recommendations from other groups. In Texas and elsewhere, Medicaid will not cover the drugs at all until those review panels issue guidance.

Other states have completed initial reviews. Florida, for example, placed Sovaldi on its preferred drug list, while Pennsylvania officials will seek public comment on draft rules requiring patients to show some liver damage, get a prescription from a specialist and have their treatment overseen by a case manager to qualify.

In an era of limited resources, the prices pose a particular dilemma for public programs.

“For the price of Sovaldi for one patient, we could provide health insurance through Medicaid for [up to] 26 people for an entire year,” said J. Mario Molina, chief executive of Molina Healthcare with Medicaid plans in 10 states.

“There’s no question it is a very efficacious drug. But it’s just who gets it and when.”

Molina is holding off on offering the drugs in many cases while it seeks answers from state officials about whether they will cover this year’s costs, which were not built into Molina’s contracts. Other Medicaid insurers are seeking similar assurances from state officials.

Is There Harm In Waiting?

Waiting is not unusual for hepatitis patients. In the past, many chose to delay treatment because the available options were problematic. Older regimens were complex to administer, had to be taken for longer periods and were less effective. So there is pent-up demand for the new drugs, although some may still want to wait for interferon-free alternatives.

Adding to the controversy over the prices of Sovaldi and Olysio, the panel convened by the two medical societies had recommended that some patients who can’t take interferon be treated with a combination of those two drugs — nearly doubling the cost. That combination was not approved by the Food and Drug Administration, although doctors can still prescribe it. The combination has been tested on only a small sample of patients.
“There’s a big temptation to treat them now,” said Fox of the VA panel. “But we have to remain evidence-based.”

With a slow-progressing disease, waiting until those studies are completed — or until there are other interferon-free regimens — might be a good option for such patients, Fox said.

For every 100 patients chronically infected with the virus, 60 to 70 will develop liver disease, according to projections cited in a report prepared for the California Technology Assessment Forum. Over 20 years or more, an expected 5 to 20 will develop cirrhosis, which is irreversible scarring of the liver. One to five of those would die of cirrhosis or liver cancer.

Experts note that it’s highly unusual to ask patients to wait for a treatment already on the market.

“When you think of diabetes, high blood pressure, cancer or other conditions, there aren’t many where there is a serious discussion of whether or not treatment should be given”— and usually that’s because of a safety issue, said David Thomas, another member of the medical societies’ panel.

“There’s no safety issue, so ‘Does it cost too much’ is the only question left,” said Thomas, director of the infectious diseases division at Johns Hopkins University School of Medicine.

Speaking for himself, rather than the panel, he said that cost questions need to be debated “with all the vested parties at the table, not just the doctor sitting down with a patient.”

Yet doctors are increasingly being asked to think about cost — at the risk of a loss of trust by their patients, said NYU’S Caplan.

“That’s a shot directly across the bow of the traditional notion that my physician is my advocate, that they look out for me … and don’t worry about the national debt or the fact that Medicare will go broke in 20 years,” he said. “They worry about me.”

Who Should Get Pricey Hepatitis C Drugs?