Sitting atop metal stilts in front of this island’s condemned hospital, an imposing, hunter-green shipping container serves as a lifeline for local residents in need of drinking water.

Nine months ago, Hurricane Maria slammed Puerto Rico and damaged the system that feeds drinking water from the main island to Vieques. Moses West, 59, a retired Army officer from Texas, brought in the machine made by his company to help fill the void.

He spends his days beside it, fine-tuning the repurposed 20-foot shipping container, which is capable of producing 3,500 gallons of water daily and holding 528 gallons in storage.

He chats with the hundreds of people who have regularly arrived to fill up their containers with fresh water. They include restaurant workers, hotel owners and the fire department employees who collect water for people who can’t make their way to the machine.

Residents initially approached the machine and him with curiosity and skepticism, West said. They asked questions about how it worked and whether the water was clean. They also worried that he would return to the mainland and leave them to fend for themselves in the rubble of a paradise lost.

West said he understands residents’ concerns about his enterprise. “It’s one of those things where there’s a lot of trust involved in providing people water,” he said.

Vieques, an island less than 10 miles east of Puerto Rico’s main island, sustained serious damage from the Sept. 20 storm. The electricity remains unstable. Patients with kidney disease are forced to take flights off the island for treatment because officials condemned the hospital that housed the only dialysis clinic.

And the water service, while restored, still relies on generators to reach homes, said Haronid Cruz Felix, press, culture and tourism director of the island. But many residents are still concerned about the quality of the water and continue to seek supplies from West.

The machine is called an atmospheric water generator. It cools humid air until the water transforms from a gas to a liquid, otherwise known as condensation. The device pulls water from its gas form and filters it. The final product is clean, drinkable water. 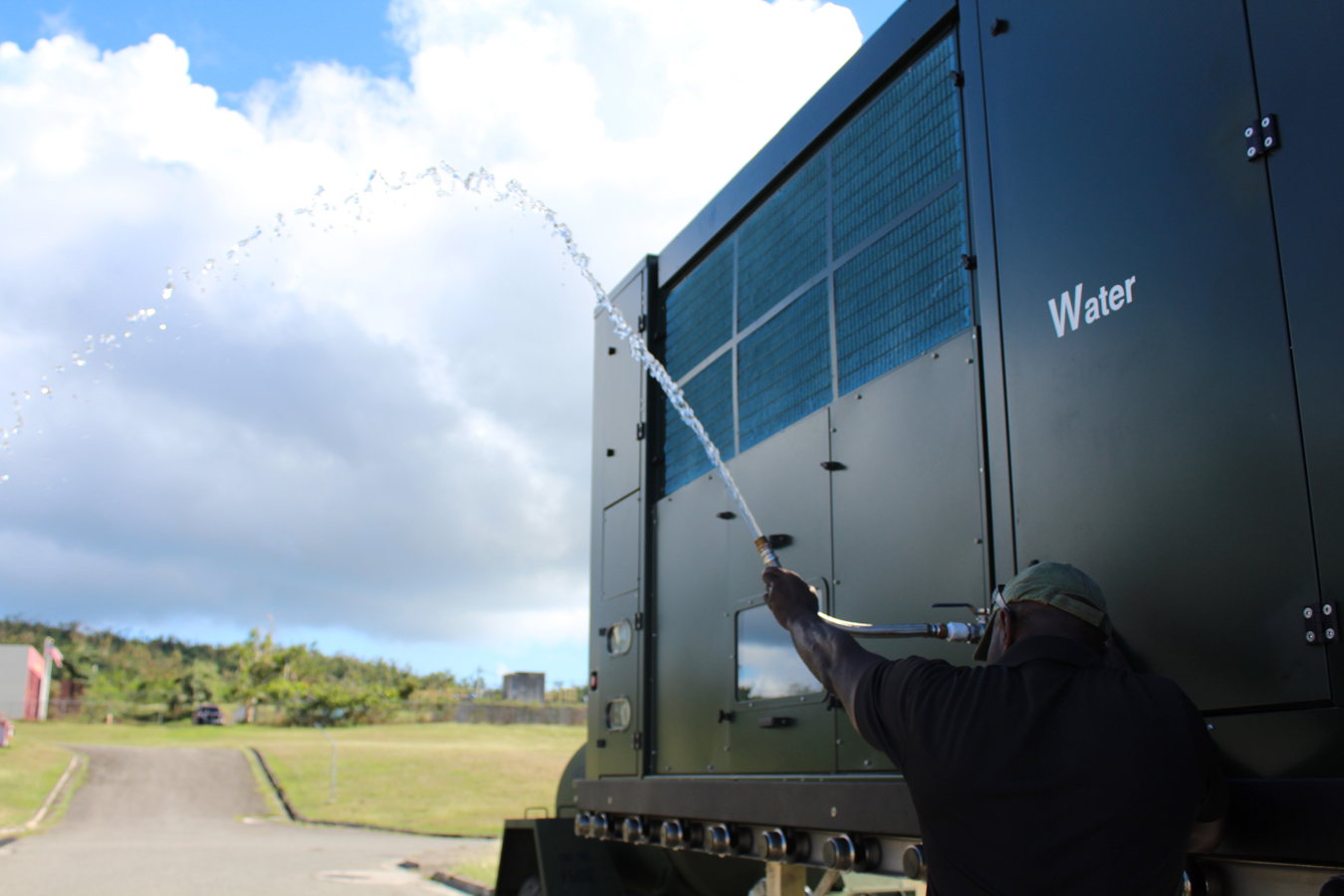 West sprays drinking water out of the atmospheric water generator in Vieques, Puerto Rico. He transported one of the units to the island in January after hearing about the water shortage.(Carmen Heredia Rodriguez/KHN)

The technology is more than a decade old, said Vaibhav Bahadur, an associate professor at the University of Texas at Austin who studies condensation. But the machines haven’t caught on, in part because few people know about them. The low market demand helps keep the price tag high, he said, which again discourages potential buyers.

“In order to bring down that cost, you need a bigger market. It’s a chicken-and-an-egg problem,” said Bahadur.

The devices also need a high amount of energy to extract the water. In addition, they’re bulky, which can pose challenges in trying to reach disaster areas.

But none of that deterred West. He trained as an infantry officer and later as a maintenance test pilot. After leaving the military, he first saw an atmospheric water generator at his neighbor’s home in Hawaii and believed it had business potential.

West purchased an atmospheric water generator from overseas and modified and tested it at Trinity University in San Antonio, Texas, for water quality, energy consumption and water production. 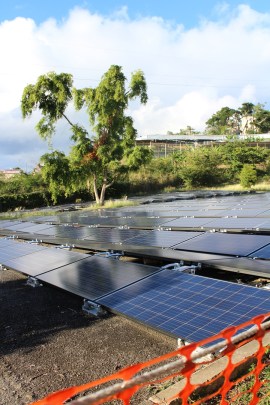 A solar grid operates beside the condemned hospital in Vieques, Puerto Rico. West plugged the water generator into the battery powered by these panels, he says, switching his production from a diesel plant to a clean energy source.(Carmen Heredia Rodriguez/KHN)

His company, AWG Contracting, has sold six smaller water generators to customers and the military. But West thinks large-scale water production is where the business should be, and he placed the unit in Vieques to help meet residents’ needs and show off the equipment’s ability.

“The Army had trained on the small units and not the big units,” he said. “So, I decided to take the big unit here to get it into a place where it could do some good and I can show what it can do at the same time.”

He spent approximately $35,000 that his lawyer helped him raise to transport the machine from Texas to the island and fired it up in January.

A diesel generator once powered the production. West said he successfully switched the generator to solar energy. However, the machine failed in early June because of mechanical issues. The island’s isolation makes it difficult to quickly obtain the right parts, he said. He expected to have it up and running again by month’s end.

With stable income from his military retirement and disability benefits, West can afford to stay on the island to operate the machine seven days a week. Since the military detail he collaborated with has left, though, he must be present at all times in case another malfunction occurs.

Residents, who had been largely relying on bottled water brought in by relief officials, gravitated to the generator, he said, and were happy for the new source of water. They started bringing him meals and asking how he was doing. One tried to bring him a mattress, he said, because it seemed he never left the medical campus.

“The local population has grasped the machine and I’ve gained their trust,” he said, “and I don’t want to let them down.”

Squeezing Water From Air: Mysterious Machine Is A Lifeline On Battered Island