HUMBLE, Texas — When Lisa Boncler gashed the side of her head on the gate to her front yard, she immediately called her neighbor for a ride to the emergency room. 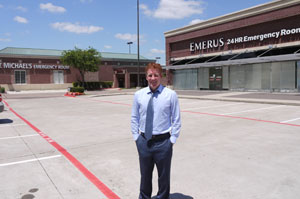 Toby Hamilton, CEO of Emerus, which runs freestanding ERs in Texas, stands between his ER and a competing one in Sugarland, Texas. Hamilton is an emergency physician by training (Photo by Phil Galewitz/KHN).

In this fast-growing Houston suburb, six ERs are just a short drive away. She chose Texas Emergency Care Center, a facility that feels like a Western lodge with its earth-toned brick walls, leather chairs and coffee bar. The eight-bed ER that opened last year has almost everything — except, that is, an attached hospital.

“This is so convenient,” says a smiling Boncler, 40, as a doctor prepared to close her wound with medical staples less than an hour after her accident. “I’ve been here before. It’s always fast.”

The speedier care offered at such facilities, which are springing up in many states including Texas, Florida and North Carolina, comes at a steep cost, however. Standalone ERs, which are often located near high-end shopping centers and target consumers with private insurance, bill like regular emergency rooms. And those prices, which can top $1,000 for a single encounter, are spurring worries that the rapid growth of the facilities will lead to higher insurance premiums.

Nationally, the number of such centers has doubled to more than 400 in the past four years, according to data from the American Hospital Association and state health agencies. “It’s a great added benefit (for patient convenience) but I think it will lead to overall higher costs for everyone,” says Vivian Ho, a health economist at Rice University in Houston.

Operators insist they are providing consumers with needed services. “You can never have too much care for patients,” says Rhonda Sandel, CEO of Texas Emergency Care Center.

Several hospital chains are driving the boom – including HCA Inc., which will open its seventh ER later this year in Florida, and Wake Med Health and Hospitals, which will add its fourth next month in the Raleigh, N.C., metro area. They regard the facilities as a way to expand into new markets, generate admissions to their hospital and reduce crowding at their hospital-based ERs. 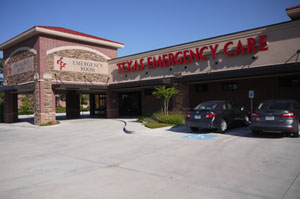 Nowhere is the trend hotter than in the Houston metropolitan area, with 41 freestanding ERs and 10 more under development. Counting the freestanding ERs and traditional hospital-based ERs, greater Houston has 150 emergency rooms — twice the number as greater Miami — even though its population is only slightly bigger, according to a KHN analysis.

“It’s the wild, wild West and these things are growing like wildfire,” says Howard Gershon, a hospital consultant based in Sante Fe, N.M., who consults with Texas facilities.

Many of the Houston facilities are owned by ER doctors. Like hospitals, the doctors see them as more profitable than urgent care centers, which are outpatient clinics that treat most illnesses and injuries but are not designed to handle life-threatening conditions such as chest pain, difficulty breathing or severe bleeding. Because the free-standing emergency rooms can charge higher rates, even though they typically don’t treat heart attacks or trauma, or receive patients by ambulance, Gershon says.

Sandel says the higher rates are due to regulation. “The state tells us what we have to have and to be open 24 hours and those things are costly,” she says.

The federal health law known as Obamacare, which may exacerbate the shortage of primary care physicians because millions more people will get coverage, could increase demand at these facilities, he says. But that could also undermine one of the law’s aims to curb health costs.

The transient population and fast growth of suburban areas around major cities such as Houston makes them a ripe market for the ERs because many people lack a regular doctor, Gershon says.

While the ERs charge insurers double or triple the amount per patient as an urgent care center or doctor’s office, patients use them for routine care that could be provided in less costly settings, Ho says. That is the case with standard ERs as well.

Yet, insured patients have little incentive to drive past the more expensive, freestanding ERs because their co-payment is only $50 or $100, just modestly more than what it might cost for a visit to an urgent care center or doctor’s office. Their insurers pay the balance generally.

Insurers have little power to stop patients from using the facilities because by state law, they must pay for ER coverage anytime a patient perceives they have an emergency, regardless of whether that turns out to be the case. For that reason, the freestanding ERs have no need to contract with insurers and offer discounts.

The main reason they are more costly than urgent care is that they charge a “facility fee” on top of a fee for the physician’s time—just like traditional ERs. The facility fee was originally intended as a way to help hospitals recoup overhead costs including 24-hour staffing, administration and equipment.

Those fees have led to a backlash from some uninsured patients who are stunned by their bills and who have filed complaints with the Better Business Bureau. In addition, health insurance giant Aetna has sued freestanding ERs over the facility fees, which can often be hundreds of dollars.

In an effort to protect consumers, Texas in 2009 passed a law to license freestanding ERs that are not owned by hospitals. The law requires facilities be open 24 hours, always have doctors on site and give everyone a medical screening regardless of their ability to pay – all requirements that apply to hospital-based ERs. Many of the clinics, though, don’t accept Medicaid or Medicare and the law did not change that.

The law had a side effect — legitimizing the centers’ facility fees. As a result, more than 30 freestanding ERs have been built in the state since its passage.

“If the centers were being truly used for emergencies it would be one thing,” says Alan Ayers, vice president of market development at Concentra Urgent Care, the nation’s largest urgent care chain. “But here you mostly are just adding cost to the health care system because a high percentage of the cases could be treated in urgent care.”

He says the doctor-owned freestanding ERs look like urgent care centers – until patients see their bills.

The ERs usually don’t disclose prices before treatment, saying they don’t know how much it will cost until they evaluate a patient.

First Choice Emergency Room, a privately owned chain that has nine locations in the Houston area, says only about 5 percent of patients are admitted to the hospital — nearly a third of the rate at most standard ERs.

Critics such as Ayers say that shows the freestanding ERs are treating patients who could be seen more cheaply in other settings. But First Choice officials and other freestanding ER operators say they often see the same types of conditions as traditional ERs.

“We are an ER, no different than a hospital-based ER,” says Heather Weimer, a senior vice president at First Choice, explaining why its costs are higher. She says if patients come in with needs that can be addressed more cheaply elsewhere, they are told that.

Insurers, for their part, are working to educate their members about seeking care in less costly settings, says Shara McClure, a vice president at Blue Cross and Blue Shield of Texas.

But the trend continues because “in the affluent suburbs, there is money to be made,” she says.

That’s the case in Sugar Land, southwest of Houston, where two competing doctor-owned facilities — Emerus 24-hour Emergency Room and St. Michaels ER – sit adjacent to one another just off the freeway and across the street from Whole Foods Market. Two hospital-based ERs are within a mile.

On a recent weekday afternoon, both Emerus and St. Michaels were relatively quiet.

Shirleye McCraw was being treated in a private room at Emerus for a racing heart-beat. “I thought this would be quicker than going to a hospital with their long waits,” says McCraw, 76, while getting intravenous fluids and waiting for results of a blood test and a CT scan.

Worried that insurers will eventually cut payments to those unaffiliated with hospitals, Emerus has started converting its facilities into “micro hospitals,” with a few beds that treat patients such as those needing drug detox or hospice. The company has also recently partnered with Baylor Health System to jointly operate eight such “micro hospitals” in the Dallas area.

When Blue Cross’ McClure drives past the ERs in Sugar Land, she thinks about the consequences. “When they build it, people will come and use it. But they need to know it’s not free.”

Carrie Feibel contributed to this story.