Updated at 12:09 p.m. Feb. 19 to reflect that West Virginia is seeking a partnership exchange with the federal government, while South Dakota is not.

It’s official. The Obama administration will be running new health insurance marketplaces in at least 26 states— including the major population centers of Texas, Florida and Pennsylvania.

The federal government had hoped more states this week would agree to form a partnership exchange—the deadline to apply was Friday—but the offer was largely rebuffed. New Jersey, Ohio and Florida, several of the biggest states that had not declared their intentions, officially said no late in the week.

“I have determined that federal operation of the Exchange is the responsible choice for our state,” New Jersey Gov. Chris Christie, a Republican, wrote in letter Friday to Kathleen Sebelius, secretary of the Department of Health and Human Services.

For consumers, it should make little difference whether the new Internet sites are run from state capitals or Washington, D.C. But federal regulators hoped states would shoulder some of the work and stakeholder groups such as hospitals and insurers wanted states to help as well. The exchanges will open for business Oct. 1.

The Obama administration has given “conditional approval” to 17 states and the District of Columbia to run their own marketplaces, which will offer one-stop shopping for private insurance or Medicaid, the state-federal health insurance program for the poor. About 12 million people are expected to buy coverage through the Internet sites next year, with the number increasing to 29 million by 2021, according to consulting firm PriceWaterHouseCoopers.

Twenty-six states, most Republican-led, have indicated they will let the federal government run the marketplaces, also known as exchanges. And seven governors from Arkansas, Delaware, Illinois, Iowa, Michigan, New Hampshire and West Virginia have sought approval for the third option— a partnership with the federal government.  Three of those — Arkansas, Delaware and Illinois — have already received conditional approval.

In a partnership, states would approve which plans can participate on the marketplace and handle consumer assistance duties such as setting up call centers to handle inquiries. The federal government would handle the more complex duties of running the website, marketing the site and determining the eligibility of millions of people for government subsidies which will make prices more affordable. 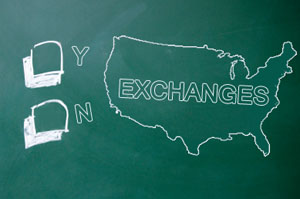 Health and Human Services Secretary Kathleen Sebelius said this week no matter what governors decide, residents in every state will have a marketplace on Oct. 1, which will sell coverage to individuals and small employers. Those policies will take effect in January.

Consumers will generally see little difference in how the websites work regardless of who operates them, say experts. Unlike buying insurance online today, the marketplaces will offer standardized policies so consumers can easily compare plans, something administration officials say should lead to more competitive pricing.

Obama administration officials have said they prefer states to run the marketplaces because they know their local communities and have longstanding relationships with key groups, such as insurers and insurance agents.

Most hospitals, doctors, insurers and other stakeholder groups favored state involvement where they thought they might have more sway. But most states opted against operating an exchange, citing worries about cost and lack of real autonomy or political opposition to the health law.

Nearly all states plan to finance their marketplaces with a tax or surcharge on premiums that insurers will pass on to policyholders.

Its unclear if every state that has applied to run a state exchange will get a green light. The administration rejected Mississippi’s bid last week after the governor said he would block the marketplace from connecting people to Medicaid.

Idaho has yet to start building its exchange as it waits for state lawmakers to pass legislation allowing it. Idaho is also the only state to win conditional approval without having yet hired an information technology vendor to start building its website. “It will require a significant and accelerated effort to meet all of the necessary deadlines before October open enrollment,” said Carolyn Pearson, a director with consulting firm Avalere Health.

Utah also has expressed doubts about going ahead with its own exchange even though it has operated one just for small businesses since 2009.

And while Virginia and Ohio did not apply for partnership status, state leaders have indicated they want to review qualified health plans.

Here is a breakdown of state actions.

States that have applied to run their own online marketplaces:

States that have applied to partner with the federal government:

States defaulting to the federal exchange:

Federal Government To Run Insurance Marketplaces In Half The States