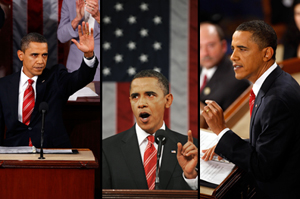 Much of President Barack Obama’s State of the Union address will deal with the economy, but the speech also offers him another opportunity to tout the benefits of the new federal health law as the GOP continues to seek repeal. Republicans say Obama should use the speech to forge a compromise and offer significant changes.

Kaiser Health News reporter Jenny Gold asked nine health policy experts to share their views on what points they would like President Obama to make in his speech.

Former secretary of Health and Human Services under President Bill Clinton, now president of the University of Miami.

What the president should say: “When all Americans have affordable, quality health insurance, we all win. Our health care businesses and professionals are a powerful economic engine to produce quality jobs in the future. Those of us who have health insurance  employees and employers  will be relieved of the unfair burden of paying for the uninsured through our own health premiums. We need healthy people and a healthy economy. If anyone has a better idea to cover 32 million Americans, eliminate pre-existing conditions and lifetime limits and close the doughnut hole for our seniors my door is open.”

Founder and chairman of a health care consulting company and former secretary of the department of health and human services under President George W. Bush.

I would like to hear President Obama use the word “austerity” in describing future government spending policy. Across Europe, leaders are buckling down to the job of “getting real.” So far, no indication of a similar seriousness has appeared from the president. A good place to start a new economic realism in the United States would be a proposal to transition from unlimited entitlements in federally supported health benefits to a philosophy of defined contribution among certain populations. The United States has entered an era of right-sized expectations. The president should clearly signal he knows that.

The president should acknowledge that his campaign promise to reform our health care system and the process by which Congress enacted the new law has unfortunately created divisions within the American public as reflected by the makeup of the new 112th Congress. He should acknowledge that both supporters and non-supporters of the law have legitimate issues, but, that when the political rhetoric is set aside, there is more that unites us than divides us. He should observe that both the Republicans’ Pledge to America and the new law agree that health care should be accessible for all regardless of pre-existing conditions or past illnesses and that your insurer should be prevented from dropping your coverage just because you become sick. He should admit that the health care law is imperfect, that it must do more to control escalating costs, but he is right to state that it is the law of the land. So he should reach out to Republicans and those who find fault with the law and heal the wounds of the past and move forward. He should ask Congress to work jointly with him to build on the law, improve those parts of the law that need improving and yes, eliminate those parts that divide.

The president should declare that the passage of the health care law completes a strong safety net for the nation  a quest nobly begun by President Theodore Roosevelt. Now is the time to focus on the economic health of the nation. That will require getting the nation’s fiscal house in order. And controlling health care costs is a big part of that challenge. The president should encourage bipartisan efforts in three areas: medical malpractice reform; paying doctors for the quality of their work, not the quantity of their services; and ways to amend and improve the health law instead of repeal and replace.

What I hope the president will say: “As part of my new innovation and competitiveness agenda, our implementation of the health care law will place much greater emphasis on patient-centered, provider-friendly and consumer-driven principles with recognition that true innovation and sustainable delivery solutions are more likely to originate within the private sector and the marketplace than Washington, D.C. In the future, government should help define the playing field to maximize access and equity, but cost control, quality and innovation of integrated delivery systems should remain the purview of individuals, families and communities operating through transparent and accountable markets. Competition and millions of daily decisions made by educated consumers is the only effective way to slow rising health care costs.”

Resident fellow at the American Enterprise Institute, a research organization in Washington D.C.

President Obama will surely defend his signature health legislation, but he cannot skirt recognition of the hardship that his measures have already caused. The administration repeatedly points to the insurance market reforms tucked into the bill that restrict plans from dropping or denying coverage to people with prior conditions. Indeed, few would argue that there wasn’t a need for some measure of insurance reform for individuals who get sick or have existing conditions. But there were a lot of ways to tackle this challenge without destabilizing the entire insurance market. Now we are witnessing an ad hoc effort by the administration to suspend various parts of the legislation, and give favored employers and states waivers from the most burdensome parts of their legislation. They are trying to keep things in the insurance market together until 2012. The administration doesn’t want to destabilize the health market too much before the president has to run for re-election. But premiums and prices are already rising as a consequence of the health legislation  and so is the number of Americans priced out of coverage. President Obama needs to explain to Americans why he passed major health legislation only to see the health insurance market come undone. His temptation will be to blame insurers. That political playbook is used up. It will ring hollow on a public that was promised “reform.”

Here is what I think he should say: “Now is the time to put our differences aside and work together to support effective implementation of the Affordable Care Act. It is time to stop the heated rhetoric that unnecessarily scares and mischaracterizes health insurance reform. While some want to focus their efforts on repealing and undermining the health law, this is a terrible mistake. We should not reverse the progress and benefits that millions are already realizing. More than ever, now is the time to continue our drive to control runaway spending. Soaring medical costs threaten U.S. competitiveness. Health care costs are crowding out other critical government programs. Skyrocketing premiums are consuming the wage growth of working Americans causing business to face dilemmas about protecting their workers’ health and investing in growth and job creation. My challenge to Congress is to work across the aisle to develop approaches to augment the Affordable Care Act and accelerate our efforts to control costs, reward innovative approaches to improve patient safety and outcomes, and reduce the burdens faced by businesses.”

Executive director of Health Care for America Now, a coalition of labor and civil rights groups dedicated to expanding the number of people with comprehensive health coverage.

What the president should say: “We need to make sure the health care law lives up to its promise of quality, affordable health care for America’s families, seniors and businesses. That’s a goal we all share.

“To those who do not support the new health care law, I say this: I respect our differences, but it’s the law of the land and it’s already working. Americans at long last are free from worrying that they’ll be denied care because they have a pre-existing condition or that they’ll be dropped because they are sick. Millions of businesses are taking advantage of job-creating tax credits. Three million senior citizens have received $250 checks to help them pay for their prescription medicines, and millions more will get 50 percent discounts on brand-name drugs. Young adults across the country are being covered by their parents’ health plans. Cancer patients and people with serious chronic diseases no longer face benefit caps that would limit their care and force them into bankruptcy. This law will hold insurance companies accountable and end unjustified rate hikes. Let’s not debate this again. Instead, let’s put people back to work and rebuild America’s middle-class.”

Senior fellow at Project Hope, an international health foundation and a former administrator of the Medicare and Medicaid programs under President George H.W. Bush.

The easy one: Suggest some specific changes to the Affordable Care Act to show the president wants to reach out to Republicans to improve the act rather than replace it. These could include revising the 1099 reporting requirements, promising increased flexibility to states looking to better manage Medicaid, reviewing specific provisions that Republicans raise as particularly burdensome, etc.
The harder one: Commit to following up the recommendations from the two deficit-reduction commissions with legislation that would begin to ramp down entitlement spending growth-especially Medicare.

Psst, Mr. President, A Little Advice On Your SOTU Remarks