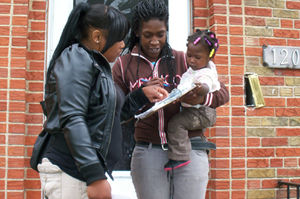 Tami Wright, 21, fills out an application for her 1-year-old daughter Natailayh, with the help of Cierra Ball. Federally funded initiatives to enroll kids in Medicaid and CHIP hold lessons for enrolling adults once health overhaul goes into effect in 2014. (Phil Galewitz/KHN)

ST. LOUIS – On a cool weekday afternoon, a small group of young adults gathers outside Covenant House, a homeless shelter where some of them live or go to school. Armed with clipboards, they jump into a van and head out to search for their target: uninsured children.

For the next three hours, the group of 20- somethings, called “door knockers,” canvass a lower-income neighborhood looking for children who are eligible for two government programs: Medicaid and the Children’s Health Insurance Program (CHIP). “We’re in the neighborhood to sign up kids for free health care,” says Maurice Raspberry, 21, who lives at the shelter.

Tami Wright, also 21, answers the door at her grandmother’s house. Her children, ages 1 and 3, are uninsured because she didn’t know how to renew their coverage through Medicaid, the state-federal health program for the poor. “I don’t work and I don’t have a car to get to the welfare office,” says Wright, who is uninsured.

One of the canvassers shows her how to fill out an application. “I like the feeling of knowing we are trying to help kids,” says Cierra Ball, 20, a high-school dropout who is earning her GED at Covenant House and is also uninsured.

More From This Special Report

The door knockers, who are paid $10 an hour, are part of a nationwide drive to sign up the 5 million children who qualify for the Medicaid and CHIP programs but aren’t enrolled. Children without insurance are 10 times more likely than insured children to go without needed care, a study by the Urban Institute found. The Obama administration wants all eligible children signed up by 2015. So far, the federal government has handed out $40 million in grants for enrollment initiatives, and $80 million more is on the way.

The effort also serves as a dress rehearsal for a major enrollment campaign likely to occur when the health care law takes full effect. The law aims to extend coverage to 32 million Americans, and beginning in 2014, requires most people to have insurance. It offers new coverage options, including a sharply expanded Medicaid program.

Yet many health experts say it will take a major campaign by government, health facilities and nonprofit groups to get people signed up. Cindy Mann, the top Medicaid official at the U.S. Department of Health and Human Services, says the efforts to find and enroll uninsured children now will help show what works best – from low-tech labors such as knocking on doors to more sophisticated approaches using government databases or social media to find uninsured kids. 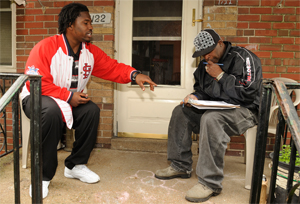 Juarez Troope (right) enrolls his two children to the state’s CHIP with the help of Ramon Raspberry. (Tim Parker for KHN)

“There will always be communities, individuals and families who for one reason or another need some guiding through the enrollment process,” Mann says.

Research suggests many reasons why so many children remain uninsured: Sometimes parents aren’t aware their kids are eligible, or don’t know how to enroll or re-enroll their children. Some states have been reluctant to spend extra money to cover more children and have cumbersome application processes.

President Obama’s plan last year to expand CHIP has gotten off to a slow start because budget-strapped states don’t have the money to broaden eligibility, according to several studies, including from the National Academy for State Health Policy.

Louisiana has emerged as one of the most aggressive states in finding and enrolling uninsured children. The state has used various strategies, including greatly simplifying the application process, to reduce the rate of uninsured children to 5% in 2009 from 11% in 2003 – nearly 85,000 fewer uninsured kids. 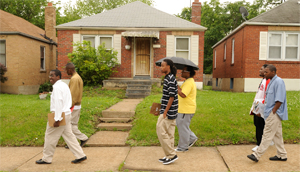 Members of the “Door Knockers” program with the Moses Group walk along North Street in St. Louis, Mo. (Tim Parker for KHN)

In February, the state identified 10,000 uninsured children by searching food-stamp rolls. Parents didn’t have to make a single phone call or sign a form.

Still, Louisiana faces a big challenge in signing up more than 550,000 eligible poor adults for Medicaid once the health law expands coverage in 2014, says Ruth Kennedy, deputy director of Louisiana’s Medicaid agency and head of its CHIP program.

Other federally funded efforts include:

– New Mexico is setting up a dozen self-service kiosks in community centers, libraries and Head Start facilities to enroll children.

In St. Louis, the door knockers have worked on enrollment since March, helping to sign up more than 150 children for Medicaid or CHIP. Like Ball, many are uninsured but will be eligible for Medicaid or federal subsidies to buy coverage when the main parts of the health law take effect in 2014.

Their efforts are funded by St. Louis Children’s Hospital, which got a $1 million federal grant and gave $600,000 of it to MOSES (Metropolitan Organizations Strengthening and Empowering Society), a coalition of 35 mostly black churches known for its grass-roots organizing. MOSES contacted Covenant House to find young people for the project. Many of the canvassers were on Medicaid as children, MOSES co-founder John Cross says: “They understand the need.”