WEST PALM BEACH, Fla. — Inside his family’s trailer home, Israel Cortes sits in his bomber jacket at the kitchen table, doing his best to talk despite the tracheotomy tube in his throat. 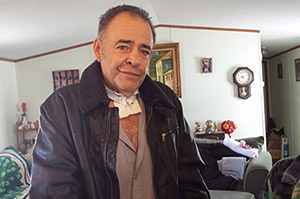 Israel Cortes, 60, at his home in West Palm Beach, Fla. Cortes is part of a shift to enroll those on Medicaid who get long-term care services into privately run managed care plans. (Photo by Phil Galewitz/KHN).

Communicating in whispers and handwritten notes, Cortes, 60, is frustrated at the slow pace of his recovery from a stroke but relieved to be home with his mother and brother after four months in a nursing home.

“The nursing home was a place to go and die,” he confides to his case worker from Sunshine Health, a Medicaid managed care plan.

Jodie Muenz, a social worker by training who helped Cortes go home just before Christmas, assures him he is getting better and will be able to drive again soon. “Focus on the positive,” she says, after inspecting his bathroom and bedroom to make sure he can get around safely with his cane.

Muenz’ visit is part of a transformation of how Medicaid, the state-federal health insurance program for the poor, is providing long-term care to hundreds of thousands of people in Florida and a growing number of states. After two decades of shifting millions of Medicaid enrollees into managed care, most of them women and children, Florida is mandating that approach for 45,000 nursing home residents and another 40,000 who get long-term care services at home or assisted living facilities.

The job of a case worker like Muenz is to make sure her clients get what they need to stay healthy – and that they live in the least-restrictive and least costly setting possible.

The state pays her employer, Sunshine Health, and six other managed care plans a set monthly fee to cover the costs of each resident — a model that enables state officials to predict and limit annual Medicaid costs, but which critics worry may give insurers an incentive to skimp on benefits to increase profits.

States had traditionally been reluctant to place frail and elderly people into managed care. But that caution is fading as officials become comfortable with managed care and more anxious to curb Medicaid spending.  The elderly and disabled account for about 6 percent of Medicaid enrollees, but nearly half of the program’s spending.

States such as Florida are betting that mandated managed care will save them money by helping people get support to remain in their homes or in less-costly community settings, rather than in nursing homes, where monthly fees average $6,000. 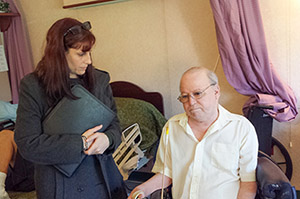 Seven other states — Kansas, Delaware, Minnesota, Tennessee, Hawaii, New Mexico and Arizona — also have statewide mandates requiring nursing home residents and other long-term care patients on Medicaid to be in such plans, according to Truven Health Analytics, a research and consulting firm.

But Florida’s move, which began last August, is being closely watched because it is the largest to enact a mandatory strategy statewide.

Other states planning to follow later this year include New Jersey, Ohio, California and Virginia, according to Truven. A few more, such as New York, Texas and Rhode Island, are expanding the approach to additional counties. As a result, the number of long-term care residents enrolled in mandatory managed care is projected to double this year to 1.2 million.

“The mandatory transition of large numbers of consumers who use long-term care … is unprecedented,” says Laura Summer, an analyst with the Georgetown University’s Health Policy Institute.

“It throws a monkey wrench in the equation to get care issues resolved quickly,” says Brian Lee, executive director of Families for Better Care, a patient advocacy group in Tallahassee.

Nursing homes are concerned about losing residents, money and autonomy. “We are not anti-managed care,” says Mike Cheek, a vice president with the American Health Care Association. But he worries the plans will delay payments and that states won’t have the capability to properly oversee them.

Cortes’ journey home is one of the early success stories — he’s among 163 Medicaid enrollees in Florida that Sunshine Health helped move out of nursing homes in the past few months, and one of 70 to make it home. The rest went into assisted living facilities.

His return was possible because he had been gone only a few months and had family members at home to support him, officials say.

But the plan played a key role helping him learn how to care for his tracheotomy tube and change his diet to control his blood pressure and diabetes. The insurer pays for home-delivered meals and someone to come in once a week to shop and clean. It also pays for a blood pressure monitor and pulse oximeter so he can monitor the oxygen in his blood.

Many people in nursing homes simply aren’t healthy enough to move home—even with the help of managed care firms.

Jesus Garza, for instance, another one of Muenz’ clients, has muscular dystrophy and uses a straw in his mouth to help control his wheelchair. He has lived for 13 years at the Boynton Beach Rehabilitation Center, a nursing home with 40 Sunshine Health enrollees.

“He needs total care, feeding, bathing, dressing,” Muenz says. Her short visit enables her to monitor his health, particularly important after Garza was hospitalized two months ago with an inflamed pancreas. After chatting with him for 10 minutes, she reviews his records, including a list of prescription drugs.

Researchers say there is still little conclusive evidence about the effect of managed care on long-term care residents. Although the approach has reduced the percent of people using nursing homes, it has yet to be determined if it saves money. That’s because it may be increasing home and community-based services, and also because Medicaid may be paying some plans too much, says Paul Saucier, director of Integrated Care Systems at Truven.

Nor is there evidence that managed care plans move people out of nursing homes if they need that level of care, he says.

Nonetheless, Betsy Heartfield, nursing home administrator of The Pavilion in Jupiter, Fla., worries that such conflicts will arise. “Do the health plans have ulterior motives?” she asks. “Sure they do. … The direction that they are going to go is to move people out of nursing homes into the lowest-cost setting.”

To make the transition more palatable to nursing homes, the state legislature guaranteed that health plans could not cut reimbursements in the first year. The state has also required that all nursing homes have the option to be included in all health plan networks in the first year so residents would not have to move to a different facility based on their choice of a plan.

Florida has also set up an appeals system that residents and their families can use if they disagree with a decision.

About half of nursing home residents in Florida’s Medicaid program chose a health plan. The rest were automatically assigned to one. All the plans cover a core set of benefits but differ on extras such as dental and vision coverage.

Some plans such as Sunshine Health also offer more financial assistance to help members pay for the costs of moving home, such as making doorways accessible for wheelchairs.

Muenz of Sunshine Health believes the shift to managed care will be good for consumers, whether they are at home or in nursing homes. “Our job is to keep patients safe,” she says. “We are not here to compete with nursing homes but to have them as partners, to help keep patients in the least restrictive environment based on their medical condition.”