SEATTLE — It’s the last class period of the day. The students lean back on couches and take turns describing the most important day of their lives: the day they became sober.

For Marques Martinez, that date was Nov. 15, 2016. Until then, he had used OxyContin, Xanax and nearly every other drug he could get his hands on, he said. He had been suspended from school for selling drugs. “I knew what I was doing was bad,” he said. “But I didn’t think there was another way.”

Two years ago, Martinez’s parents sent him to an in-patient treatment center and then enrolled him in this unusual high school, Interagency at Queen Anne, or IQA. Martinez, 17, learned about the school from an alumnus and knew it might be his last option. He was skeptical at first, but he knew one thing immediately: “I felt safe here.”

The Seattle public school campus, known as a recovery school, is designed for students learning to lead lives of sobriety while they earn their diplomas. The roughly 20 students attend classes in math, language arts and physical education, and they complete other courses online. They meet regularly with a counselor and attend daily support group meetings based on Alcoholics Anonymous programs. 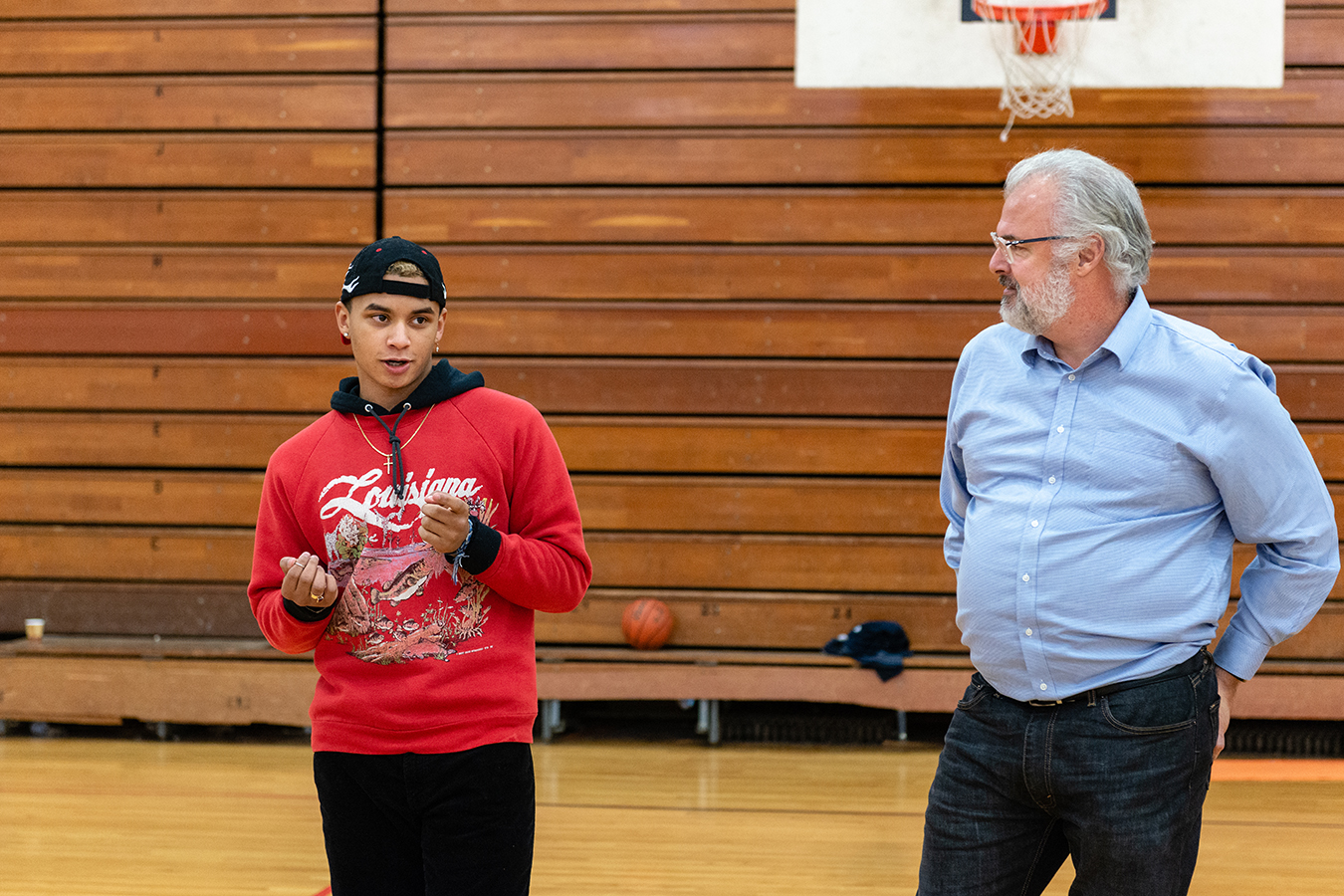 Student Marques Martinez talks about what he is grateful for during a class gathering in December. (Heidi de Marco/KHN)

Recent research shows that recovery schools — also known as sober schools — help keep their students off drugs and in class.

A 2017 study by Vanderbilt University associate professor Andy Finch and other researchers showed that students in recovery schools were significantly more likely than those not in such schools to report being off drugs and alcohol six months after they were first surveyed. And the average reported absences among the 134 recovery school students in the study was lower than the other students.

Recovery schools first appeared in the late 1970s and now about 40 exist nationwide, including in Minnesota, Texas and Massachusetts. More are likely to open as opioid overdoses continue to climb, said Finch, who is co-founder of the Association of Recovery Schools. “There has been a gap in adolescent treatment for many, many years,” he said. “The schools are one of the programs that fill in that gap.”

Finch said about 85 percent of the recovery schools are public or have some source of public funding, while some are private campuses or part of treatment centers. New sober schools are planned in New York, Delaware and Oregon, Finch said.

Starting any school can be complicated, but recovery schools have extra layers of complexity. They have to recruit their students, impose policies specific to them and fund the services they need.

Advocates and school officials in Delaware had hoped to start a public recovery school this year but couldn’t get the funding they needed, said Don Keister, who helps run Attack Addiction, an advocacy group he co-founded after his son died of a heroin overdose. Keister said a local school district offered to provide the space and the equipment but didn’t have the estimated $2 million needed to cover staff costs.

“There is a real need,” he said. “In Delaware, we don’t have any real help for adolescents.”

Nationally, illicit drug use among middle and high school students is at record lows. Still, nearly 1 in 5 10th-graders reported using an illegal drug in the previous 30 days, according to the annual nationwide Monitoring the Future survey. 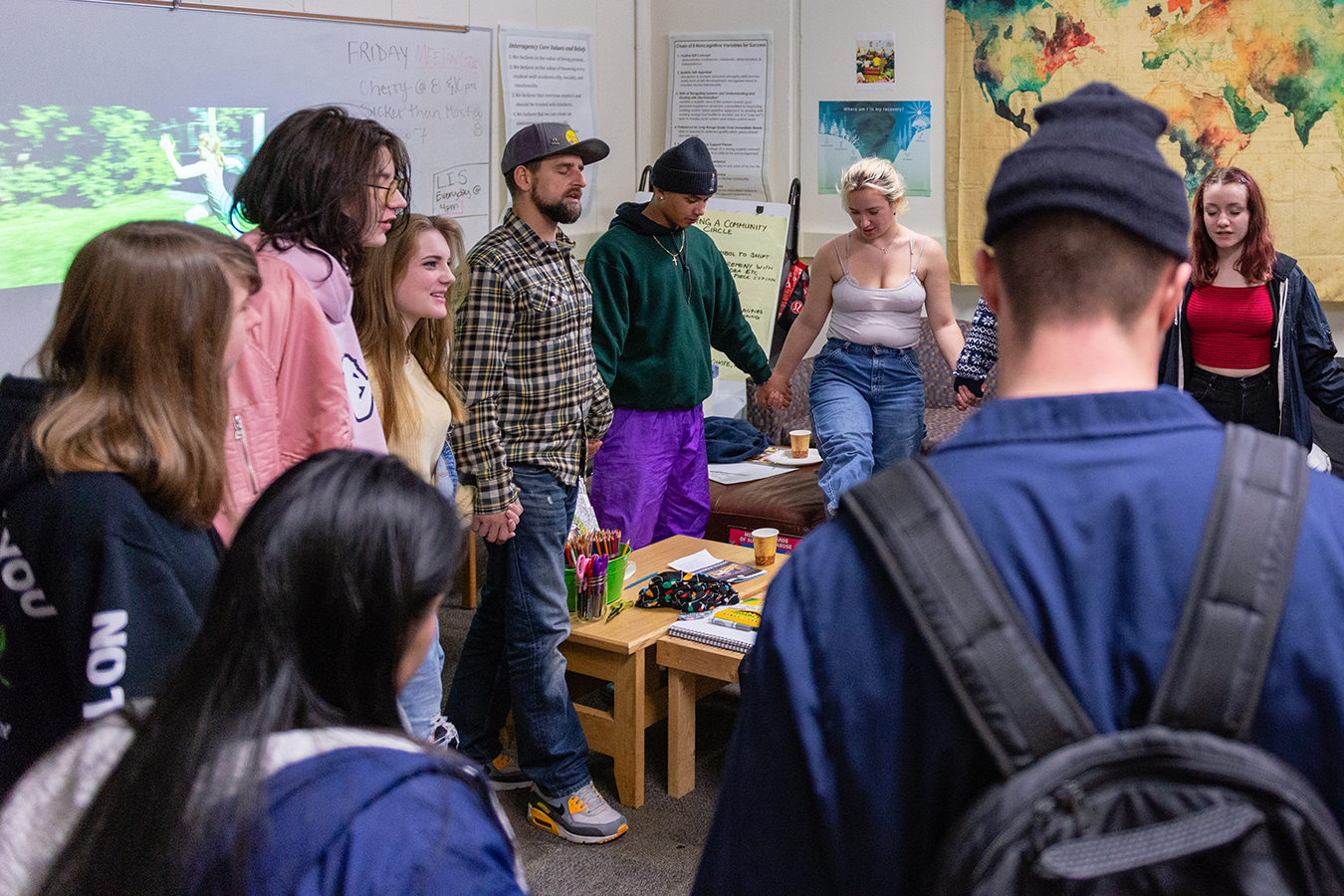 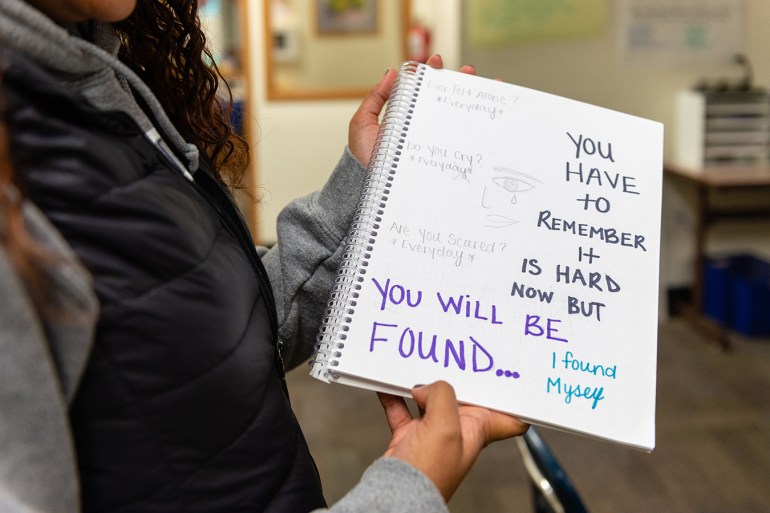 Student Annika Laband holds her notebook, in which she writes about her feelings about sobriety.(Heidi de Marco/KHN) 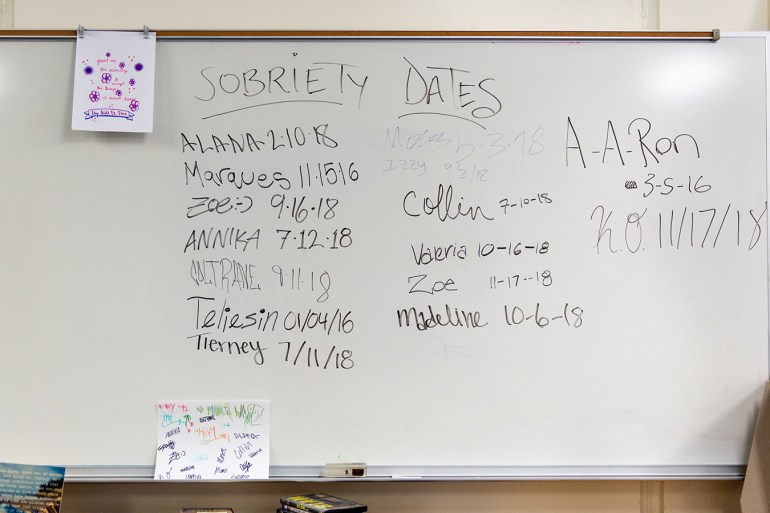 Students’ sobriety dates and motivational quotes are written on whiteboards in the school lounge.(Heidi de Marco/KHN)

Like Martinez, many of the Interagency at Queen Anne students go there straight from treatment programs. They say they encounter less temptation than at traditional high schools. “There, people offer you drugs every day,” said 15-year-old Coltrane Fisher, who regularly used heroin, cocaine and other illegal drugs before coming to the school last March.

The success of recovery high schools is partly due to the fact that the students are among sober peers, as well as teachers and counselors who all support their sobriety.

“Unless these kids get engaged with other young people in recovery, they don’t stand a chance,” said Seth Welch, a recovery support counselor at Interagency Queen Anne. “This becomes their new community.”

But the going is not always easy.

Teachers at IQA say they believe the environment has been critical to the students’ success, but it is sometimes a challenge to work there. Some students are way behind in their credits, and they don’t always respond well to authority. “The more we push them, the more they push back,” said one of the teachers, Phyllis Coletta.

Sometimes classwork must be set aside, Coletta said. On a recent school day, one of the newer students was so upset that she spent most of the day crying, clutching a blanket. Coletta hugged her and they took a long walk. 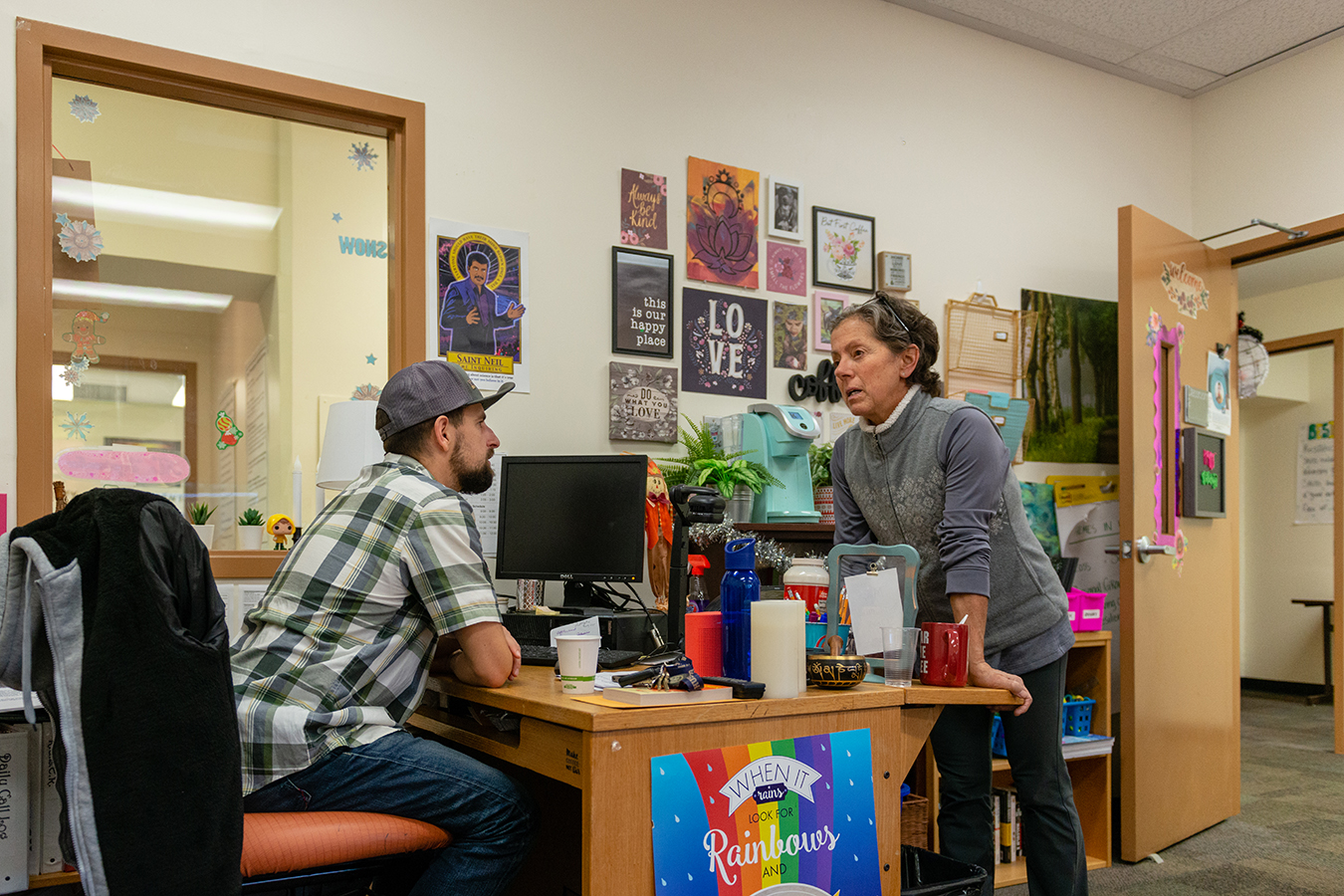 Counselor Seth Welch talks to a teacher about a student who is feeling depressed on Dec. 13, 2018. (Heidi de Marco/KHN)

Interagency at Queen Anne, which opened in late 2014, is part of a network of alternative public school campuses called Interagency Academy, which also serves homeless and incarcerated youths.

At first, the campus drew opposition from a group of elementary school parents who feared the students would sell drugs in the neighborhood. But Melinda Leonard, the former vice principal who helped found the school, said those fears have now given way to community support.

“The campus is the most sober school in the school district,” Leonard said.

Students at the school sign a sobriety pledge and agree to random drug testing. They aren’t kicked out for relapsing, but Welch, the support counselor, works to get them back into treatment if they begin actively using again.

Since the school opened, 21 students have graduated. Welch and the teachers help students plan for the future. Martinez, for example, will graduate this month and is taking community college courses.

On a recent morning, language arts teacher Heidi Lally played a song from the hit musical “Dear Evan Hansen” about loneliness and anxiety in high school. She encouraged the students to write about the song in terms of their recovery.

One student wrote, “I’ve had suicidal thoughts and attempts and these lyrics made me remember those times.” Another wrote, “Shadows crowd me / I’m lost / but what’s the cost to end this feeling.”

For Coltrane Fisher, the cost was hitting rock bottom. He began smoking marijuana at age 12 and then moved on to other drugs. Last year, he stopped going to school and didn’t come home for days on end. “Nobody grows up thinking you are going to become an addict,” he said. “It just happens.” 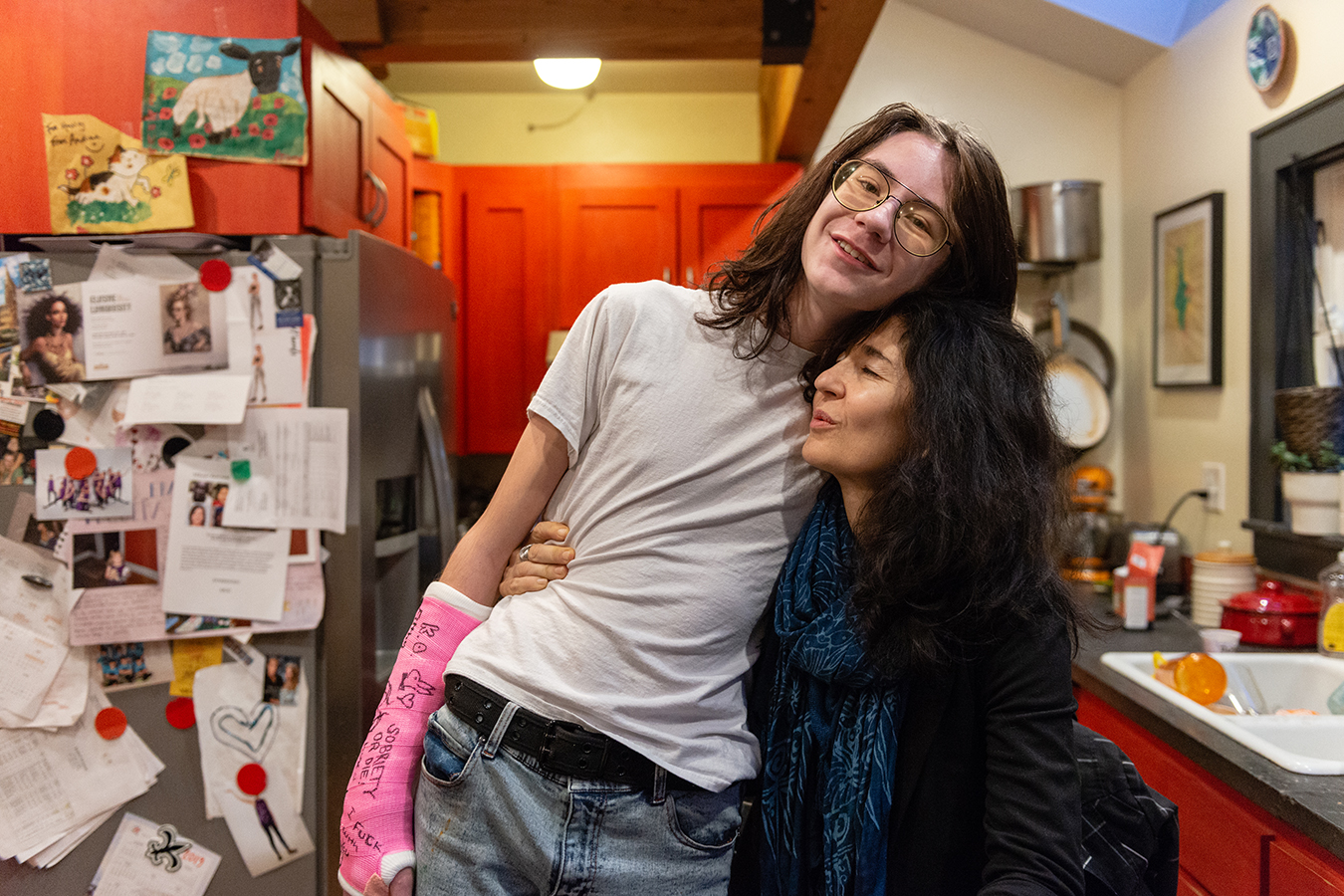 Coltrane Fisher and his mother, Lisa Luengo, on Dec. 14, 2018. Luengo, a community college French teacher, sent her son to a program in Utah before enrolling him at Interagency at Queen Anne. (Heidi de Marco/KHN)

Fisher’s mother, Lisa Luengo, said she didn’t realize the extent of what was happening. “He derailed quickly and very deeply,” said Luengo, a community college teacher. She sent Fisher to a rehab program in Utah before enrolling him here.

Luengo knows the school is right for her son, even though she believes it is weaker academically than other schools. “If he was in a different school setting, he would crumble,” she said. “The school is giving him a future.”

Fisher agreed. “I can accomplish nothing in my life if I am not sober,” he said, “and I would not be sober if not for that school.”