Rising concerns about spending on prescription drugs that treat rare diseases are not justified, according to a new analysis in the journal Health Affairs.

“We wanted to focus on the true impact of orphan drugs,” said Victoria Divino, a senior consultant at IMS Health and an author of the study. Researchers at IMS Health and drug maker Celgene analyzed U.S. pharmaceutical spending from 2007 to 2013 on more than 300 drugs that had orphan approval under the 1983 Orphan Drug Act.

The Orphan Drug Act has long been considered a success for encouraging the production of hundreds of drugs for rare diseases.

The Health Affairs article is the latest in a growing debate about the causes of high prescription drug prices and how orphan drugs may play a role. Drugs that win orphan approval have been cited for commanding premium prices, costing up to $300,000 per year or more, according to market research reports.

The pharmaceutical industry’s interest in the orphan drug program has escalated in recent years and, increasingly, doctors and researchers have raised questions about unintended consequences of the act.

The Orphan Drug Act provides a seven-year exclusivity period and other financial incentives to companies that develop drugs for diseases that affect fewer than 200,000 people.

“When those financial incentives become sort of an investment opportunity to take advantage of the Orphan Drug Act. That’s a huge, huge concern,” said Clare Krusing, a spokeswoman for America’s Health Insurance Plans, a national association for health insurance companies. AHIP released a paper in August that questioned prices on orphan drugs when they were being used outside of their approved orphan indication.

Celgene has been one of the top beneficiaries of the orphan drug law. The company’s flagship drug Revlimid, which has orphan status for multiple myeloma and many other cancers, had sales of $5.8 billion in 2015. Evaluate Ltd., a London-based research firm, forecasts that Celgene will become the No. 1 orphan drug company in world, as measured by sales, in 2020.

For the Health Affairs paper, Divino and her team narrowed their analysis to orphan drug spending on drugs when they were used only on the rare diseases they were approved to treat under the act. The researchers used a database estimated to represent 98 percent of overall U.S. sales.

“The number of orphan drugs is increasing but when we look at this line of the actual spending and the forecast as well … yes there is growth but it’s a consistent linear trend,” Divino said. 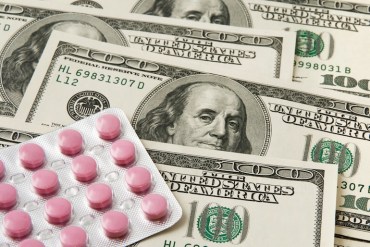 Divino said the study’s focus was on aggregate spending and they did not look at the effect of orphan drug prices on individual patients.

In an email statement, the pharmaceutical industry trade group PhRMA, said the study “reinforces that the overall impact of orphan medicines on payer budgets is relatively small and contrary to rhetoric, the percentage of medicines with both orphan and non-orphan indications is small.”

But AHIP and others say that not including the cost of orphans when they aren’t used to treat rare diseases skews the pricing issue for patients.

“It’s not really the true orphans we worry about. It’s about the other types of gaming and abusing the orphan drug act which drives up expenditures,” AHIP’s Krusing said.

Researchers at Johns Hopkins Medicine called on lawmakers last year to close loopholes in the act, saying the law’s financial incentives encouraged high prices and motivated companies to apply for orphan designation even when a drug is known to treat more common conditions.

The paper, published in the American Journal of Clinical Oncology, noted that seven of the top 10 selling drugs worldwide in 2014 had received orphan status. Those listed included popular drug names such as Crestor and Humira.

“There are a lot of factors I think that have come up in pricing in general but what people are getting a glimpse of is the sheer greed,” said Dr. Martin Makary, an author of the 2015 paper and professor of health policy at Johns Hopkins School of Public Health.