If state officials think they can escape a fiscal quagmire by refusing to expand Medicaid under the federal health law, they might want to reconsider.

State Medicaid costs will jump $76 billion, or nearly 3 percent, over the next decade if all 50 states decide to expand Medicaid eligibility in 2014 under the federal health law. But state spending on the program would still increase to the tune of $68 billion even if not a single one opts for the expansion, according to a study released Monday by the Kaiser Family Foundation. (KHN is an editorially independent program of the foundation.)

That’s because even states that do not expand eligibility would see a surge of people sign up for the health insurance program for the poor, who were previously eligible but not enrolled. Beginning next October, people will find it easier to sign up for Medicaid because of new online health insurance marketplaces set up under the law, as well as simplified enrollment methods, said Diane Rowland, executive vice president of the foundation and executive director of the Kaiser Commission on Medicaid and the Uninsured. The insurance exchanges and new enrollment rules start in 2014 regardless of whether states expand Medicaid, with coverage slated to take effect on Jan. 1, 2014.

Republican governors of several states, including Florida and Texas, have said they can’t afford the expansion.

State eligibility for Medicaid today varies nationwide. Under the federal law, starting in 2014, nearly everyone under 133 percent of federal poverty level (about $31,000 for a family of four) will be eligible. The Supreme Court in June gave states the option to decide whether to expand the program. The federal government will pay for the full cost of the newly eligible from 2014 through 2016, after which  states will have to pick up some of the costs, but no more than 10 percent after 2019.

The report, conducted by researchers from the Urban Institute, estimated 21 million additional people would sign up for Medicaid if all states participated.

The study projects that Medicaid spending across all states would increase by 0.3 percent from 2013 to 2022, while federal spending on the program increases 21 percent. Ten states, including New York and Iowa, would see Medicaid spending fall during that timeframe because they already provide broad eligibility and would benefit from higher federal funding. Likewise, a dozen states, half of them in the southeast, would see state Medicaid spending increase by between 4 and 7 percent through 2022 because their eligibility levels are currently more stringent than under the health law.

The report found that expanding Medicaid would have limited impact on total state spending. Overall, the new Medicaid spending represents a 0.1 increase in total state spending relative to the overall state general fund, through 2022. Even among states such as Florida and North Carolina that are projected to see the biggest increases in state spending, the increase in new spending is projected to be about 1 percent of state general fund spending, after the savings in uncompensated care are included.

“This is pretty attractive and should be hard for states to eventually–not right away– to walk away from,” said John Holahan, co-author of the study and director of the health policy research center at the Urban Institute.

Alan Weil, executive director of the National Academy for State Health Policy, said a 1 percent increase in spending for states is still significant for those struggling after the economic downturn. “A lot of states are still digging their way out of the fiscal downturn,” he said. 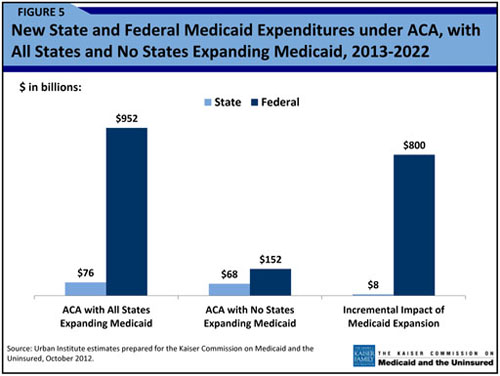