Vicki Bartholomew started a support group for wives who are caring for a husband with Alzheimer’s disease because she needed that sort of group herself.

They meet every month in a conference room at a new memory-care facility in Nashville called Abe’s Garden, where Bartholomew’s husband was one of the first residents — a Vietnam veteran and prominent attorney in Nashville.

“My husband’s still living, and now I’m in an even more difficult situation — I’m married, but I’m a widow,” she tells the group one day.

These women — who are roughly 50 to 75 years old — draw the shades and open up to each other in ways they can’t with their lifelong friends. 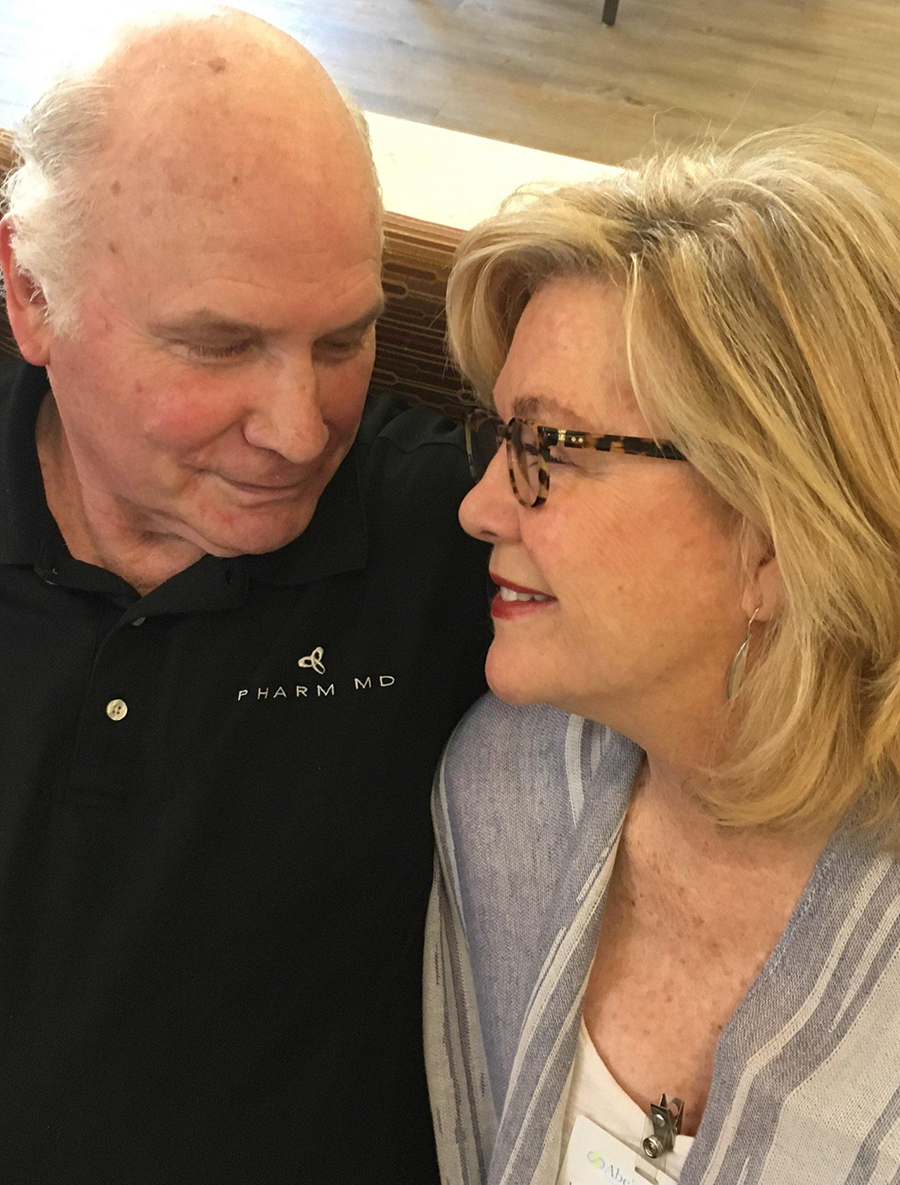 “They’re still wonderful friends, but they didn’t know how to handle this. It was hard for them, and as you all know, your friends don’t come around as much as they used to,” Bartholomew said. “I was in bad shape. I didn’t think I was — I did have health problems, and [now] I know I was depressed.”

As the number of Americans afflicted with Alzheimer’s disease continues to swell to an estimated 5.7 million, so do the legions of loved ones caring for friends and family members. The toll on Bartholomew’s own mental health is one of the reasons the Alzheimer’s Foundation of America focuses on the nation’s estimated 16 million unpaid caregivers.

With no cure on the horizon, the foundation has been highlighting the necessity of better support for those caregivers through a national tour. It stopped in Nashville earlier this spring, was in Milwaukee in June and heads to Fairfax, Va., in September.

At the live events, Alzheimer’s researchers and clinicians offer guidance on a number of topics, including how to ensure safety for patients at home, care planning and even how to entertain someone with memory loss.

The organization promotes in-person and telephone support groups, since being a caregiver is often a barrier to getting out of the house alone. Virtual support systems showed effectiveness at reducing loneliness, stress and depression in a small 2014 study.

“We have to do everything we can to educate a caregiver, to provide them with the best practices on caring for somebody,” said Charles Fuschillo Jr., the AFA’s CEO.

For example, the AFA recommends that family members:

Just as important, Fuschillo said, “we want to do everything we can to avoid caregiver burnout.”

The breaking point sneaks up on even the most committed caregiver, say Alzheimer’s advocates, especially as the nights grow more sleepless. Alzheimer’s patients can tend to pace, or wake up their partner every few minutes. They can become violent. Or, perhaps worse, they can leave the house.

“And I’ve had some issues at night that I had to take care of alone,” Pam Hawkins, who cares for her husband with Alzheimer’s, said during a support session. “But I’m not ready to have anyone there at night.”

For now, she said, her husband usually sleeps all night. And if there’s a problem, her son-in-law is 15 minutes away.

She’s had to hire caregivers during the day. Knowing how to find and hire the right person is a shared concern by Alzheimer’s family members that inspired a checklist for navigating the process. Tips include these: Interview the aide in the home. Over-share information about the patient. Ask what kind of quality control a supervisor would provide.

Hawkins is adamant about keeping her husband at home, whatever the cost.

“He’s not going anywhere,” she said. “He’s staying at our home until he moves to heaven. We made that decision a long time ago.”

But many caregivers have no choice.

April Simpkins said tending to her husband became all-consuming, and she’s young enough that she still needs to keep her job; she works at a local university.

“It was not possible for us to keep Joe at home,” she said.

Simpkins found she’d often have to call her husband’s siblings to settle him down over the phone. One night, she had to dial 911 when he kept yelling in the hallways of their condo building.

And yet she felt some societal pressure that she wasn’t doing enough.

“There’s a lot of … glory given to the whole idea of someone being long-suffering and staying at home and giving up their life, basically, to care for their loved one,” Simpkins said. “It makes it harder for people who can’t do that.”

Everyone around the table nodded in agreement. Whatever stage of illness their loved one is experiencing, these caregivers understand the complicated existence that many have dubbed “the long goodbye.” 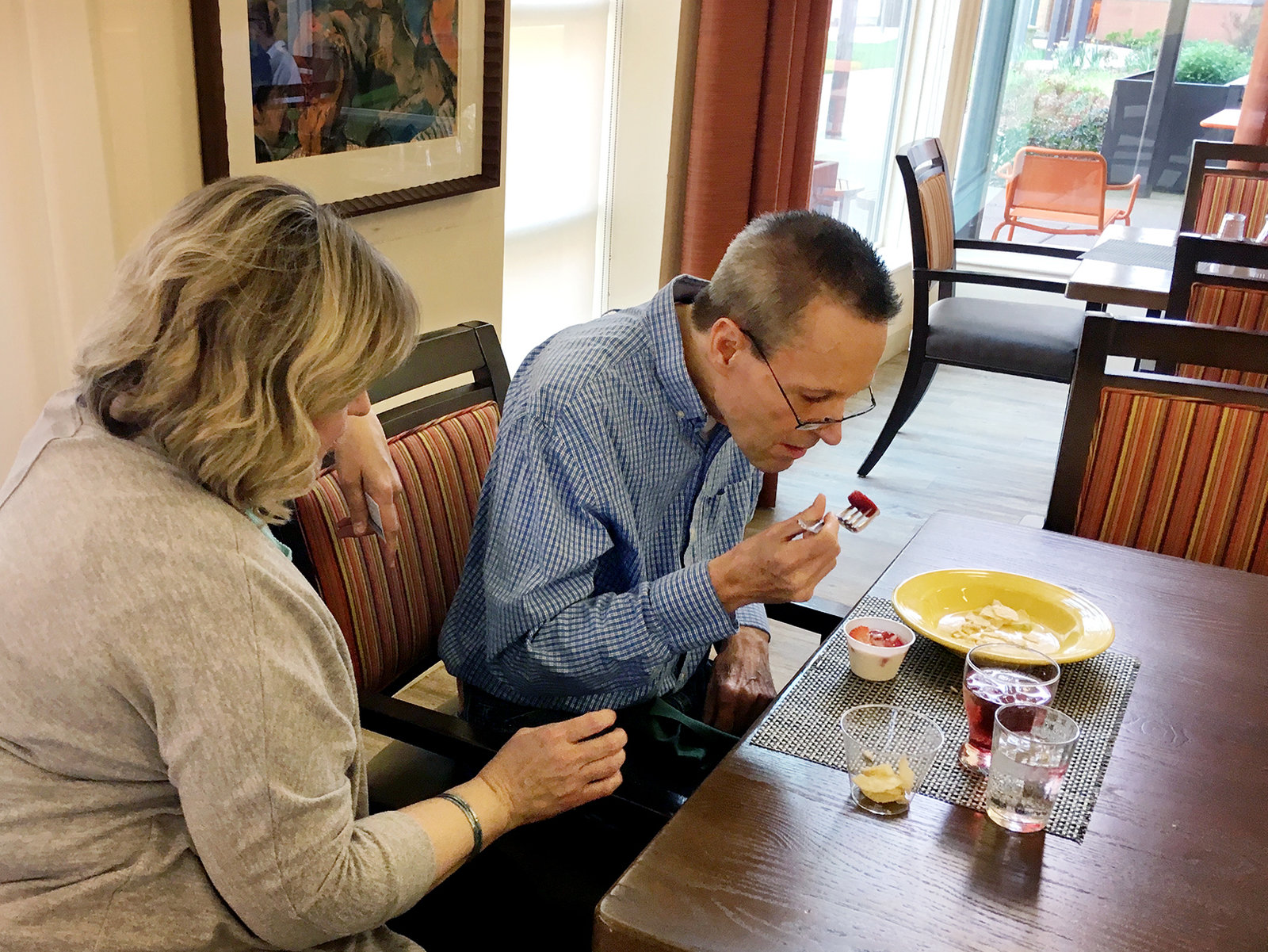 April and Joe Simpkins at Abe’s Garden, the Nashville memory-care facility where Joe moved as his Alzheimer’s advanced.(Blake Farmer/WPLN)

Along with sharing the sorrow, they find a way to share in the humor of it all — one woman said her husband wears a laundry-basket’s-worth of shirts and pants because he forgets he’s already gotten dressed. Even tips on how to reduce the odor from incontinence are offered with a loving laugh.

The support group ends with hugs. Some women head for the parking lot. Others buzz through the locked doors to see their husbands.

Simpkins, 54, sits down for lunch with Joe, who is a former state employee and a youthful-looking 66 years old. She drapes an arm around his slumping shoulders and assists him as he spears a cold strawberry with his fork.

“You know, there are some days,” she said, interrupted by a random reflection from Joe. “Yeah, some days are clearer than others.”

Simpkins tries to stop by to see her husband every day. But it’s a wicked kind of blessing, she said, that when she misses a visit, Joe no longer notices.