The Affordable Care Act, which the Supreme Court partially upheld in 2012 when it issued one of the most important decisions in decades, has spawned more litigation — topped by two consolidated cases that could become the justices’ biggest ruling on religious liberty in years. 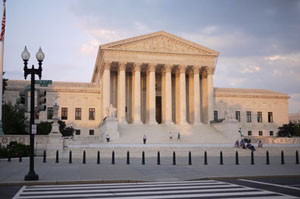 The key question is whether privately owned businesses can be hit with crippling fines of $100 a day per worker if their devoutly Christian owners refuse on religious grounds to include in their health plans four contraceptive methods that they equate with abortion.

The cases, Sebelius v. Hobby Lobby Stores and Conestoga Wood Specialties v. Sebelius, are the leading edge of more than 90 other related, pending suits filed around the country by Catholic and other Christian plaintiffs, including hospitals, social service agencies, universities and schools and businesses.

More than 1,000 religious institutions and other employers with millions of employees have similar religious objections. The administration has exempted a narrow category of these employers — mostly churches, other houses of worship and nonprofits with religious missions.

The cases coming before the high court, as well as some of the challenges brought by many other Christian institutions and corporations seeking religious exemptions, are focused on objections to four of the 20 federally approved contraceptive methods that Hobby Lobby says “would make them morally complicit in abortion.”

The plaintiffs define abortion more broadly than federal law and take exception with those four methods because each sometimes prevents the fertilized eggs from implanting into the uterus. Specifically, the companies object to the emergency contraceptives Plan B and ella — the so-called “morning after” and “week after” pills — and two types of IUDs, which are more effective and more expensive than many other methods.

The Catholic plaintiffs in many of the other pending cases object to all contraceptives, including the birth control pill.

THE LEGAL ISSUES IN PLAY

Both Hobby Lobby, a chain of more than 500 arts-and-crafts stores owned by David and Barbara Green and their three children with 13,000 employees around the country, and Conestoga, which has 950 full-time employees and is controlled by five members of the Mennonite Hahn family, provide their employees with comprehensive health insurance except for those four contraceptives which they consider immoral.

Under health law regulations, though, a company that chooses to provide insurance is required to cover all 20 federally-approved contraception methods, at no cost to employees, as part of preventive benefits. Over the course of a year, the fine for not complying totals $36,500 per employee. In 2015 and 2016, businesses with more than 50 employees that do not provide insurance will start facing a tax of $2,000 per employee per year.

The companies’ claims for relief rest mainly on the Religious Freedom Restoration Act of 1993. Congress passed it almost unanimously to provide broader legal protections than the First Amendment guarantee of “free exercise of religion,” which the Supreme Court in a 1990 case had interpreted more narrowly than before.

The law prohibits the federal government from adopting requirements that impose a “substantial burden” on a person’s “exercise of religion” unless the requirement is “the least restrictive means of furthering [a] compelling governmental interest.”

But the government argues that the companies “have not identified a single case in this Nation’s history in which a commercial enterprise has successfully [obtained a religious] exemption from a neutral law regulating a for-profit corporation’s commercial activities.”

Much of the publicity about the cases focuses on a threshold issue that the justices have never faced: whether religious owners of for-profit, privately held corporations can claim any religiously-based rights on behalf of their companies, under either religious freedom act or the First Amendment. The Obama administration says no.

If the two companies can overcome that hurdle, they must then clear three others to secure the exemption they seek.

They will win only if they convince the court that their religious rights would be “substantially burdened” by compliance with the contraceptive mandate, and the government cannot prove that the mandate furthers a compelling governmental interest and is the least restrictive means of doing so.

All four issues are hotly debated in the opposing briefs, and by legal scholars, with no precedent offering strong guidance on what the outcome should be.

The administration and its allies argue that the mandate imposes only a slight, insubstantial burden on Hobby Lobby, Conestoga, and similar employers, which would be required only to provide the required contraception coverage for employees who would themselves make independent decisions whether to use it.

The administration also says that the mandate advances compelling interests in providing the companies’ employees and their children with ACA benefits that protect their health while averting unwanted pregnancies and foster gender equality.

Hobby Lobby, Conestoga, and others counter that the mandate is a substantial burden because it would force them to either violate their religious beliefs or to be subjected to what they call “crippling” fines. The government’s “compelling interest” argument should be defeated, Hobby Lobby says in its brief, because the health law is “riddled with exceptions” that will leave tens of millions of employees nationwide with no employer-provided contraceptive coverage even if the government wins.

For example, the law does not require employers to offer health insurance at all. If a company does not offer a group plan, then the contraception mandate doesn’t apply. The law also exempts from the mandate large businesses with “grandfathered” health plans – those plans that were that were in existence at the time of the health law’s passage and have not been changed significantly since.

The two companies add that the government could provide free contraceptives for employees of religious objectors, and that in any event free or inexpensive contraceptives are available at community health centers and other public clinics.

Meanwhile, although the challenges to the contraceptive mandate pose no threat to most ACA provisions, at least four unrelated, broader lawsuits pending in lower courts seek to use a literal reading of the law’s own language to cripple it in most states.

Those four lawsuits are regarded as longer shots than the challenges to the contraceptive mandate. They claim that the federal health insurance exchange operating in the 36 states that refused to create their own  exchanges have no authority to distribute the tax credits that would make insurance premiums affordable for many buyers.

The health law says that only “an exchange established by the state” can provide the tax credits. But an Internal Revenue Service regulation says that this language should not be taken literally because doing so would defeat a central purpose of the law.

A decision in the Hobby Lobby and Conestoga cases is expected by late June.

Stuart Taylor Jr. is an author, journalist and nonresident fellow at the Brookings Institution.