The Supreme Court’s opinion Monday holding that some for-profit firms do not have to provide women the contraceptive coverage required under the Affordable Care Act if they have religious objections addressed only half of the ongoing legal battle over the birth control mandate.

But those on both sides of the issue think the court’s majority may have telegraphed which way it could rule when one of those other cases reaches the justices.

Depending on whose count you use, there are more than 50 other lawsuits still working their way toward the high court. They were filed by nonprofit groups, mostly religious educational and health organizations like universities and hospitals. 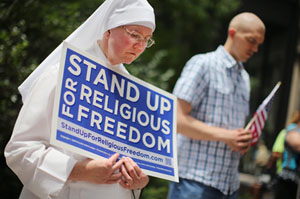 Pro-religious freedom protesters gathered on Monday in Chicago in support of the Supreme Court’s decision in the Hobby Lobby case (Photo by Scott Olson/Getty Images).

Unlike the for-profit companies, which were required to provide the contraceptive coverage directly through their insurance plans, religious nonprofits were given a special accommodation under rules issued by the Obama administration in 2013. They only have to fill out a form saying they object to providing the benefit on religious grounds, and send it to their insurer, or, in the case of organizations that self-insure, to the company that administers their health benefits.

Once that happens, the insurance company or third-party administrator provides the contraceptive benefits, at no cost to the employer or the employee. For insurers, providing contraceptives is considered less expensive than paying for pregnancy and childbirth. Third-party administrators are indirectly being subsidized by the government in these cases.

But even filling out that form is too much for many of those organizations. “Signing the form triggers the provision of services,” said Daniel Blomberg, legal counsel with the Becket Fund for Religious Liberty, which is representing many of the nonprofit plaintiffs in the cases. For many of the organizations, that makes them complicit in providing something they object to on religious grounds, he said.

But that may not be how the Supreme Court’s majority sees things. The majority opinion written by Justice Samuel Alito said the administration could extend the offer it makes to nonprofits to for-profit firms with religious objections as well. “That accommodation does not impinge on the plaintiffs’ religious beliefs that providing insurance coverage for the contraceptives at issue here violates their religion and it still serves HHS’ stated interests,” Alito wrote.

He also noted that “we do not decide today whether an approach of this type complies with (the Religious Freedom Restoration Act) for purposes of all religious claims.” But in his concurring opinion, Justice Anthony Kennedy went even further. “There is an existing, recognized, workable and already-implemented framework to provide coverage,” he wrote, referring to the HHS regulation for nonprofit organizations.

Advocates for contraceptive coverage say that is a good sign for them; that at the very least Kennedy would likely join the court’s four liberals to make a majority in upholding challenges to the regulations for the nonprofit groups.

“If I were litigating one of the nonprofit cases, I wouldn’t say it bodes well for them,” said Julianna Gonen of the Center for Reproductive Rights.  “There are some strong signals here that the accommodation the administration created for nonprofits does meet the government’s burden under RFRA.”

Blomberg of the Becket Fund, however, thinks there are signs the court would go the other way. In particular, he pointed to the court’s finding Monday that providing the coverage represented a “substantial burden” to the for-profit companies in the case, Hobby Lobby Stores and Conestoga Wood Specialties. “We think that’s going to be very helpful” in the nonprofit cases as well, he said.

And he noted that in the wake of the ruling in the for-profit case, there have already been several actions in favor of nonprofits. Citing the Hobby Lobby ruling specifically, a U.S. Appeals court in Atlanta Monday afternoon blocked enforcement of the mandate for the nonprofit religious broadcaster Eternal Word Television Network.  The Supreme Court itself stayed enforcement Monday against Wheaton College in Illinois, with only Justices Sonia Sotomayor and Stephen Breyer dissenting.

Meanwhile, there are suggestions that a compromise could be in the offing.

In the much-publicized case filed by the Little Sisters of the Poor, which operates a chain of nursing homes, the organization ultimately agreed, as ordered by the Supreme Court, not to fill out the form that went to its insurance provider, but instead to write a letter to the government with essentially the same information. That letter gave them a temporary reprieve from having to provide coverage while the case is heard by a lower court.

“When they say to the government, ‘we can’t do this,’ that triggers nothing at all,” said Blomberg.

So could nonprofits that object to sending forms to their insurance companies send them to the government instead?

Sara Rosenbaum, a professor of health law and policy at George Washington University, said that could be difficult. Particularly in the case of organizations that are self-insured and don’t use an insurer, she said, “nobody can direct the administrator but the employer.”

But Rosenbaum said it might not be impossible. It might, however, require yet another round of federal regulations.

Did The Supreme Court Tip Its Hand On Contraception Cases Yet To Come?