One of the most watched issues before the Supreme Court this term will may turn on the question of religious freedom. But it will also likely determine how women will be able to access a key provision of the Affordable Care Act – one seeking to guarantee no-cost prescription contraception in most health insurance plans.

The justices ruling on Sebelius v Hobby Lobby Stores and Conestoga Wood Specialties Corp v Sebelius, expected by the end of this month, will decide whether those companies, and potentially all other for-profit companies, must abide by the so-called contraceptive mandate. It’s a complicated case, so here is some background.

What is the contraceptive mandate?

The health law requires that most insurance plans provide preventive care services without out-of-pocket expense to beneficiaries. The Obama administration included all FDA-approved contraceptives as part of a package of preventive services for women. 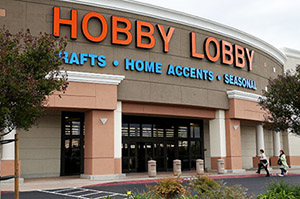 Craft store chain Hobby Lobby is the plaintiff in one of the lawsuits the Supreme Court is considering (Photo by Justin Sullivan/Getty Images).

Interestingly, for many plans, this was not new. The Equal Employment Opportunity Commission ruled in 2000 that failure of employer health insurance plans to cover contraceptives was a violation of the 1978 Pregnancy Discrimination Act. But the new mandate extends that coverage to all plans, including those in the individual and small group markets, and it requires that the plans offer a specific array of contraceptive options for no cost.

More than half the states have their own “contraceptive equity” laws on the books, many of which include religious exemptions that are similar to ones included in the federal regulation.

Who must comply with the mandate?

Most plans are covered by the mandate, but the federal regulation includes several exceptions. Churches and other strictly religious employers, who primarily employ those of the same faith and whose primary purpose is religious, are exempt from the requirement.

Nonprofit, religiously affiliated organizations, such as hospitals and universities, have a separate set of rules. They do not have to provide the contraceptives directly, but must make them available to employees through a third party. Catholic Church officials as well as some others have objected to this requirement. There are at least three dozen court cases challenging those rules still pending, according to the National Women’s Law Center.

For-profit companies, however, including the plaintiffs in the cases before the Supreme Court now, are not exempt.

The owners of Hobby Lobby and Conestoga Wood are not Catholic and say they have no problem offering birth control. So what is their challenge to the mandate?

Most forms of artificial contraception are contrary to Catholic teaching. But the Green family, which owns the nationwide craft chain Hobby Lobby, are evangelical Christians. And the Hahn family that owns Pennsylvania cabinet-maker Conestoga Wood Specialties are Mennonites.  Both families already offer most forms of birth control as part of their health plans.

The owners say they are opposed to some forms of birth control – particularly emergency contraceptives Plan B and Ella, which can be used to prevent pregnancy if taken within 24 hours to as much as five days after unprotected sex – because these contraceptives prevent a fertilized egg from implanting in a woman’s uterus That is tantamount to a very early abortion, which violates their religion, they argue. The Greens – but not the Hahns – also object to two types of intrauterine devices (IUDs) for the same reasons.

“These abortion-causing pills go against our faith, and our family is now being forced to choose between following the laws of the land that we love or maintaining the religious beliefs that have made our business successful and supported our family and thousands of our employees and their families,” Hobby Lobby founder David Green told reporters on a conference call when the lawsuit was originally filed.

Do those drugs and devices actually cause abortions?

Not according to the vast majority of medical and scientific opinion.

“Federal law and State law – which do preclude funding for abortions – don’t consider these particular forms of contraception to be abortion,” said U.S. Solicitor General Donald Verilli during the oral arguments in the case on behalf of the Obama administration. “We’ve got about 2 million women who rely on the IUD as a method of birth control in this country. I don’t think they are engaged in abortion in doing that.”

The brief filed by 10 medical groups led by the American College of Obstetricians and Gynecologists noted: “there is a scientific distinction between a contraceptive and an abortifacient and the scientific record demonstrates that none of the FDA-approved contraceptives covered by the Mandate are abortifacients.”

That’s because the standard medical definition of the start of pregnancy is when a fertilized egg implants in a woman’s uterus, not when sperm and egg first unite.

But while blocking implantation of a fertilized egg does not fit the medical definition of pregnancy, it does qualify as ending a life for many religious people.

“As far as the science goes, the FDA has said these four drugs and devices can terminate a human embryo,” said Lori Windham, senior counsel for the Becket Fund for Religious Liberty, which has been representing Hobby Lobby. She noted that the labels for the emergency contraceptives and IUDs say they can prevent implantation.

In the case of one and perhaps both of the emergency contraceptive pills, however, new research suggests they may not work that way at all – they much more likely simply prevent the fertilization of the egg in the first place.

Does whether these products cause abortion matter for purposes of this case?

Probably not. At the heart of the case is what the company owners believe, and no one doubts the sincerity of their views. At issue is whether the owners can exercise those religious objections via their corporations under a 1993 law called the Religious Freedom Restoration Act (RFRA). It says the government may not impose a “substantial burden” on the free exercise of religion unless that burden is the narrowest possible way to further a compelling governmental interest.

The federal government and advocates for the mandate say that corporations cannot exercise religious rights, only individuals may.

The government’s brief in the case said Hobby Lobby and a subsidiary Christian book store, “for-profit corporations conducting commercial enterprises, are not persons exercising religion within the meaning of RFRA.”

What would happen if the court extended religious standing to for-profit corporations?

Lots of bad things, say those who are siding with the government in the case.

For example, said Barry Lynn, executive director of Americans United for Separation of Church and State, in health care alone, “Scientology-believing employers could insist upon non-coverage of its nemesis, psychiatry. And Jehovah’s’ Witness corporations could demand exclusion of surgical coverage, under the theory that so many of such procedures require the use of whole blood products, forbidden by their faith.”

The potential for using religion to escape the reach of federal law does not end with health, said Lynn. Corporations could also claim that they do not need to abide by equal pay laws “because of male dominance in their scriptural social order,” he said, or, for those who offer public accommodations, “you can hear them say we don’t believe marriage equality is biblical, so you, (gay and lesbian) travelers, cannot stay in our hotel or eat in our restaurant.”

Windham of the Becket Fund finds all those scenarios far-fetched. “We’ve had this law on the books for 25 years and none of those cases have happened,” she said.

During the arguments before the Supreme Court, Justice Samuel Alito said much the same thing. “In all the years RFRA has been on the books,” he asked, “has any of these claims involving minimum wage, for example, been brought and have they succeeded?”

“Very few of these claims have been brought,” responded Paul Clement, who argued Hobby Lobby’s case at the high court.

Justice Elena Kagan, however, said if the court upholds Hobby Lobby’s claim, that might change. “[T]hen you would see religious objectors come out of the woodwork with respect to these laws,” she said.

What’s At Stake For Birth Control In Upcoming SCOTUS Decision