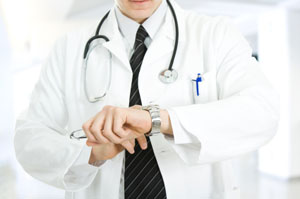 The new rules regulating duty hours were supposed to make life easier for medical residents, but both program directors and doctors-in-training give the changes mixed reviews.

These latest changes, implemented in July 2011, limit first-year residents, also called interns, to 16-hour shifts. They were put in place by the private, nonprofit Accreditation Council for Graduate Medical Education, and were intended to prevent medical errors resulting from sleep deprivation. Second- and third-year residents are still be permitted to work 28 hours at a time. But in the last four hours, they can’t take on new patients.

A survey of residency program directors was published Thursday in the New England Journal of Medicine. Of 549 responses, 73 percent reported that under the new rules residents were less prepared to take on more senior roles. Another 65 percent said that resident education had gotten worse, and only 6 percent reported that patient safety and quality of care had improved.  Meanwhile, less than half thought resident quality of life had improved.

The residents themselves also negative views of the changes.  A similar survey of 6,201 residents published in NEJM in June found that while 62 percent felt that quality of life had improved for interns, half reported that quality of life had gotten worse for senior residents, who were picking up the slack. Meanwhile, 41 percent reported that the quality of their education had gotten worse, and 48 percent disapproved of the rule changes.

Dr. Brian Drolet, who conducted both surveys and is also a fourth year resident at Rhode Island Hospital, says he was surprised that reactions to the regulations were so negative. “The intentions were good, but the actual impact has not actually been what was intended,” he says. Resident hours, he explains, are always a “trade-off between continuity and fatigue.” Tired doctors may make errors more likely, but so does increasing the number of times a patient is handed off from one doctor to another at the end of a shift.

The changes can also make life more difficult for senior residents and attending physicians who take on more responsibility when interns are off duty.

“A certain degree of regulation is needed to prevent abusive situations, but you have to be careful about how strict you make the learning environment,” Drolet argues. The accrediting council “should be responsive to the potential that the impact is negative and maybe add some flexibility.”

Drolet plans to present the surveys at the ACGME annual meeting next week.

Survey: Better Hours For Residents? Not So Fast