Dr. Mary Meengs remembers the days, a couple of decades ago, when pharmaceutical salespeople would drop into her family practice in Chicago, eager to catch a moment between patients so they could pitch her a new drug.

Now living in Humboldt County, Calif., Meengs is taking a page from the pharmaceutical industry’s playbook with an opposite goal in mind: to reduce the use of prescription painkillers.

Meengs, medical director at the Humboldt Independent Practice Association, is one of 10 California doctors and pharmacists funded by Obama-era federal grants to persuade medical colleagues in Northern California to help curb opioid addiction by altering their prescribing habits.

She committed this past summer to a two-year project consisting of occasional visits to medical providers in California’s most rural areas, where opioid deaths and prescribing rates are high.

“I view it as peer education,” Meengs said. “They don’t have to attend a lecture half an hour away. I’m doing it at [their] convenience.”

Detailing is “like fighting fire with fire,” said Dr. Jerry Avorn, a Harvard Medical School professor who helped develop the concept 38 years ago. “There is some poetic justice in the fact that these programs are using the same kind of marketing approach to disseminate helpful evidence-based information as some [drug] companies were using … to disseminate less helpful and occasionally distorted information.”

Avorn noted that detailing has also been used to persuade doctors to cut back on unnecessary antibiotics and to discourage the use of expensive Alzheimer’s disease medications that have side effects.

Kaiser Permanente, a large medical system that operates in California, as well as seven other states and Washington, D.C., has used the approach to change the opioid-prescribing methods of its doctors since at least 2013. (Kaiser Health News is not affiliated with Kaiser Permanente.)

In California, detailing is just one of the ways in which state health officials are attempting to curtail opioid addiction. The state is also expanding access to medication-assisted addiction treatment under a different, $90 million grant through the federal 21st Century Cures Act.

The total budget for the detailing project in California is less than $2 million. The state’s Department of Public Health oversees it, but the money comes from the federal Centers for Disease Control and Prevention through a program called “Prevention for States,” which provides funding for 29 states to help combat prescription drug overdoses.

The California doctors and pharmacists who conduct the detailing conversations are focusing on their peers in the three counties hardest hit by opioid addiction: Lake, Shasta and Humboldt.

They arrive armed with binders full of facts and figures from the CDC to help inform their fellow providers about easing patients off prescription painkillers, treating addiction with medication and writing more prescriptions for naloxone, a drug that reverses the toxic effects of an overdose.

“Academic detailing is a sales pitch, an evidence-based … sales pitch,” said Dr. Phillip Coffin, director of substance-use research at San Francisco’s Department of Public Health — the agency hired by the state to train the detailers.

In an earlier effort, Coffin said, his department conducted detailing sessions with 40 San Francisco doctors, who have since increased their prescriptions of naloxone elevenfold.

“One-on-one time with the providers, even if it was just three or four minutes, was hugely beneficial,” Coffin said. He noted that the discussions usually focused on specific patients, which is “way more helpful” than talking generally about prescription practices.

Meengs and her fellow detailers hope to make a dent in the magnitude of addiction in sparsely populated Humboldt County, where the opioid death rate was the second-highest in California last year — almost five times the statewide average. Thirty-three people died of opioid overdoses in Humboldt last year.

One recent afternoon, Meengs paid a visit during the lunch hour to Fortuna Family Medical Group in Fortuna, a town of about 12,000 people in Humboldt County.

“Anybody here ever known somebody, a patient, who passed away from an overdose?” Meengs asked the group — a physician, two nurses and a physician assistant — who gathered around her in the waiting room, which they had temporarily closed to patients.

“I think we all do,” replied the physician, Dr. Ruben Brinckhaus.

Brinckhaus said about half the patients at the practice have a prescription for an opioid, anti-anxiety drug or other controlled substance. Some of them had been introduced to the drugs years ago by other prescribers. 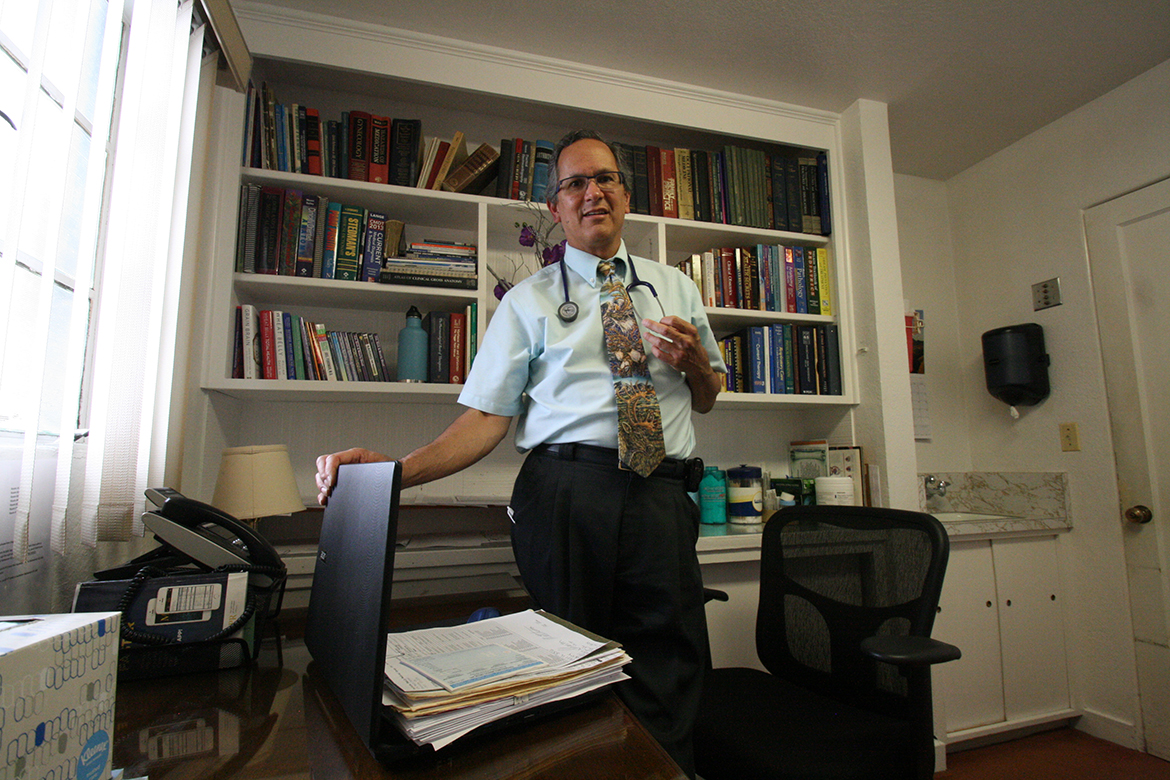 Meengs’ main goal was to discuss ways in which the Fortuna group could wean its patients off opioids. But she was not there to scold or lecture them. She asked the providers what their challenges were, so she could help them overcome them.

Meengs will keep making office calls until August 2019 in the hope that changes in the prescribing behavior of doctors will eventually help tame the addiction crisis.