Despite nearly 20 years of recommendations that health workers get flu shots, the most recent data from the Centers for Disease Control and Prevention show that less than 64 percent of them do. Consumer and business groups met in Washington Thursday to show their support for a recommendation from the National Business Group on Health (NBGH) that hospitals require all health care workers to be vaccinated annually against the flu. 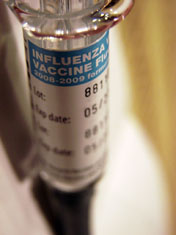 “We believe that patients have the right to assume that health care personnel, themselves, will take all reasonable measures to reduce and avoid transmission of preventable diseases including the flu,” said Helen Darling, president and CEO of the NBGH. “I think we, as people, assume that after all, they’re our caretakers and we look to them for care and treatment.”

The NBGH is a non-profit organization representing more than 300 large employers, including 68 of the Fortune 100 companies. Its statement urged hospitals to“require annual flu vaccination of all employees as a condition of employment unless employees can demonstrate medical contraindications (with physician documentation) or religious objections.” If that is the case, the NHBG says those employees “should not engage in direct patient care if they have flu-like symptoms.”

But flu vaccinations have been a point of contention among health care workers and labor groups for years. Some nurses unions have fought efforts to mandate vaccinations.

Even within the government, there are conflicting views. In a letter to the National Vaccine Program Office last month, Jordan Barab, deputy assistant secretary for the Department of Labor’s Occupational Safety and Health Administration, said his organization supports the goal of the HHS’ Healthy People 2020 initiative to get 90 percent of health care personnel vaccinated. But “we are troubled that some have tried to convert the goal into a mandate,” he wrote. (The Department of Labor letter was first reported on by Inside Health Policy)

At the press briefing, Darling said a mandate is an effective means to ensure health care providers are safe from the influenza infection. “We know that mandates work.” Among other groups supporting the proposal there were Consumer Reports and the American Hospital Association.

Dr. Don Wright, deputy assistant secretary for health care quality at the Department of Health and Human Services, said at the briefing that the agency will be publishing data by next year on hospitals that have vaccinated employees as part of their efforts to reduce hospital-acquired infections. Hospitals that report their employee vaccination data will receive a bonus payment, Wright said, and already well over 95 percent of hospitals are doing that. Wright said in an interview later that HHS is not “endorsing any one method [of boosting vaccination rates] over another. Our goal is to get the rate of vaccinations up, so the jury is still out on the best way to do that.”

HHS’ plan for reducing the number of hospital-acquired infections suggests “that we need a 70 percent rate of immunizations for health care workers by the end of 2015. That really splits the difference from the Healthy People 2010 goal, which was 60 percent, and the Healthy People 2020 goal which is 90 percent,” Wright said.

Taking Another Shot At The Flu Vaccine