WESTMINSTER, Calif. — After Yarly Raygoza attended the drug prevention program at the Boys & Girls Club here last year, she used what she learned to talk a few friends out of using marijuana.

The 14-year-old took the class again this year but worries that counseling her friends will become more difficult.

Recreational marijuana is now legal in California, which could bring a massive boom in drug sales and advertising when stores can begin selling the drug to adults without a prescription in January.

Raygoza believes that as more people 21 and older use marijuana legally, teenagers will have trouble understanding that they shouldn’t use it. Teens may also have easier access to the drug as recreational pot shops start to open, she said.

“Now that there are so many shops … kids have a better chance of getting their hands on it,” she said. “And having a discussion with them like this could be a little harder.”

Make no mistake: Marijuana is still illegal for youths.

Last November, voters approved Proposition 64, the Adult Use of Marijuana Act, making California one of eight states — plus the District of Columbia — to legalize the drug for recreational use. The measure immediately made it legal for those 21 and older to possess up to 1 ounce, or about 28.5 grams, of cannabis. It delayed legal pot sales from licensed stores until January 2018.

The legalization of recreational marijuana for adults in California and other states poses an added challenge for drug education and prevention programs. Teachers are trying to explain the risks of marijuana just as stores are preparing to open and marketers are planning campaigns.

Medical marijuana has been legal in California for more than 20 years, but experts say the new law on recreational marijuana could prompt more youths to believe that the drug is safe.

“That is an unintended consequence of legalization,” said Pam Luna, a consultant with the Rand Corp., a nonpartisan research organization. “They think that if it’s legal, it must be OK.”

Luna, who trains teachers on drug prevention education, said legalization has also prompted questions and confusion among young people. They may be getting misinformation — and peer pressure — through social media, she said.

While evidence shows that medical marijuana can help ease chronic pain and other conditions, use of the drug is linked to poor respiratory health and increased car accidents. Among adolescents, marijuana use can have negative effects on their cognitive and mental health.

Recent studies show that teens who use marijuana frequently exhibit lower cognitive performance and brain function than those who don’t. They also perform worse in school.

Despite that, teen perception of the harms of marijuana has dropped over time and many think it’s safer than alcohol, according to Elizabeth D’Amico, a senior behavioral scientist at Rand. Currently, more than half of 10th- and 12th-graders believe that smoking marijuana isn’t dangerous, according to a recent Rand report. 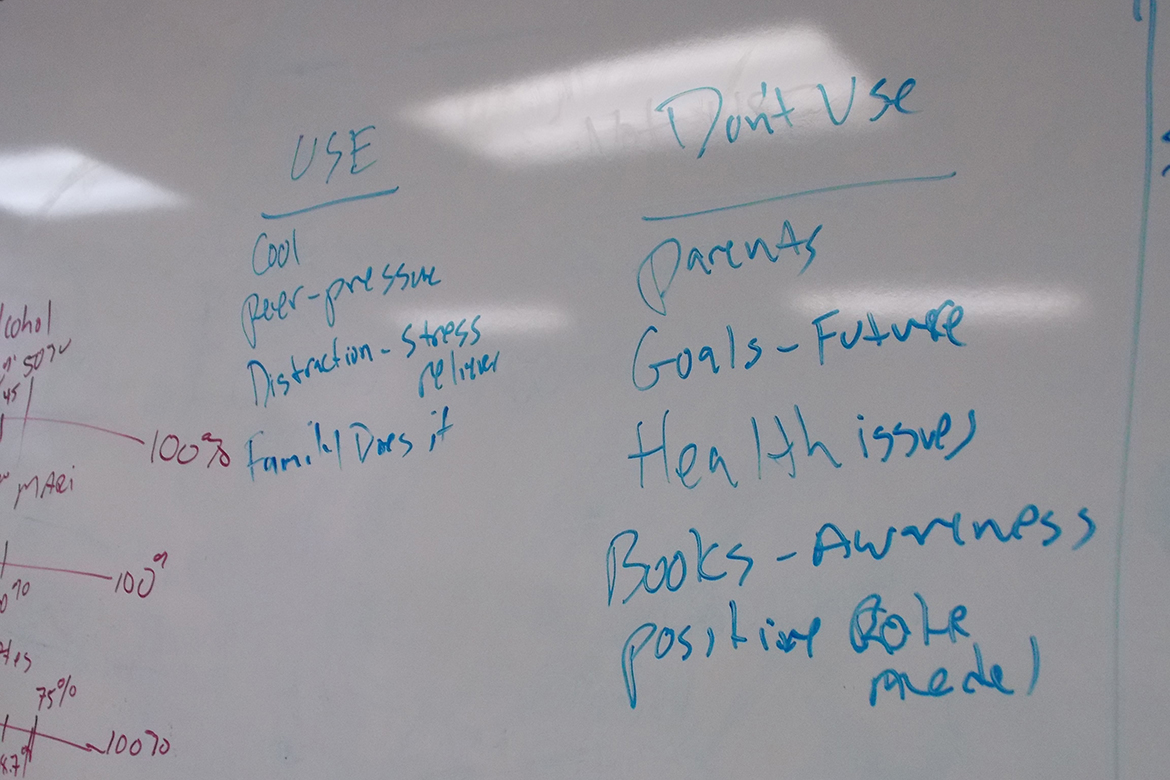 Facilitator Jeovan Davila says he doesn’t lecture teens about what’s right and wrong. Rather, he gives them facts to help them make their own decisions about marijuana. (Anna Gorman/KHN)

Adolescents in states with legal medical marijuana are less likely to believe the drug is harmful, research shows.

“The changing legal landscape has a lot to do with adolescents’ changing perceptions,” D’Amico said. “That’s why we really need to change the conversation around this drug.”

That conversation should remind young people about its potential harms and that recreational marijuana in California is still illegal for those under 21, she said.

The state Department of Public Health recently unveiled a website called “Let’s Talk Cannabis” to explain the law. Youth will have to complete community service and undergo drug education or counseling if they are caught smoking, buying or possessing marijuana, the website says.

Advertising is another factor that may complicate drug prevention education for young people, said Stanton Glantz, a professor at the University of California-San Francisco School of Medicine.

Exposure to marijuana advertising is associated with the higher likelihood of using marijuana one year later, according to research.

“It’s just everywhere now, and the market hasn’t been fully opened,” he said. “It’s the same thing as alcohol and cigarette advertising. It is all directed at normalizing it and presenting it as a fun thing to do.”

D’Amico said she and her children see the ongoing changes near their house in the San Fernando Valley. “It just creates a conversation pretty much every day because a new billboard pops up on our way to school,” she said.

To provide most middle school students with up-to-date information about alcohol, marijuana and smoking, D’Amico developed a voluntary program called Project Choice, which is used by after-school programs like the Boys & Girls Club. In five sessions, participants role-play and discuss how to make healthful choices. They also talk about the pros and cons of marijuana and the differences between medical and recreational use.

During the first session at the Boys & Girls Club of Westminster recently, facilitator Jeovan Davila asked the group of students what percentage of eighth-graders they believed used marijuana over the past 30 days. The guesses ranged from 10 percent to 60 percent. When Davila told them the correct answer was about 7 percent, the group looked surprised.

Davila said he doesn’t lecture teens about what’s right and wrong. Rather, he gives them facts to help them make their own decisions in the future. For example, if they know that most of their peers don’t use marijuana, perhaps they will be less likely to use it.

With the legalization of marijuana and the discussion on social media, Davila has seen young people talking about the drug more. During the class, some said teens might want to use because they see their family members using marijuana legally.

“The kids do bring it up,” he said. “We’ve just got to be ready, letting them know the facts.”

Teaching Teens The Perils Of Pot As Marketplace Grows