At just 4 years old, he already has nine stainless steel crowns and multiple fillings, and his gums show signs of inflammation and infection. Since a check-up more than three months ago, he’s lost a couple of teeth, including a capped tooth his mom pulled out after it started bleeding.

“Pero no llore,” said the boy, assuring Rodriguez in Spanish he didn’t cry.

This was only the second time the dental hygienist examined his teeth, many of which have rotted, in part because he is eating too many sweets and drinking milk before falling asleep. Later, a dentist at the Venice Family Clinic 16 miles away will pull up his records online and consult with Rodriguez on his case – without ever necessarily seeing the patient. 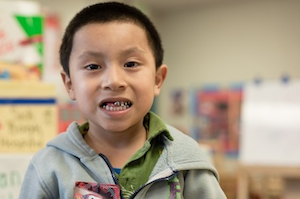 Hendryk Rodriguez already has nine stainless steel crowns, multiple fillings and signs of infection. This is the second time the four-year-old has been examined by a dental hygienist (Photo by Heidi de Marco/KHN).

It’s all part of a free “teledentistry” program for low-income patients in California who don’t have access to regular dental care. Often they’re stymied by high costs and a shortage of dentists who treat the poor. Many also face language barriers, lack legal immigration status, are afraid of dentists or have a poor understanding of what causes dental problems.

“The only thing that they know is that they have to provide for their family and that’s the most important thing for them,” said Rodriguez, who comes to the Volunteers of America Silva Head Start program on a regular basis. “You have to educate the parents.”

Rodriguez is among 15 specially trained hygienists and dental assistants who work online with dentists as part of a $2.5 million experiment designed to deliver preventive dental care and education to underserved populations. Funded for now by grants from non-profits, trade associations and others, the “Virtual Dental Home Demonstration Project” has been launched in 50 locations throughout the state, including Pacoima, Santa Monica, San Jose, Santa Cruz, East Palo Alto, San Francisco, Sacramento and Eureka.

With special permission from the state, the hygienists and dental assistants travel from place to place performing basic procedures not in their scope of practice – for instance, deciding which X-rays to take or installing temporary fillings that help prevent early decay from progressing—then consult remotely with dentists on how to proceed. Sometimes, after doing what they can, they send a patient to a dentist’s office. 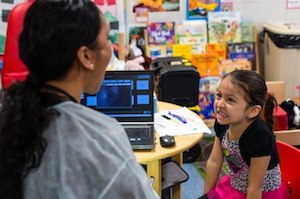 Operating at community sites ranging from schools to nursing homes, the program is meant to boost access and maximize the expertise and efficiency of the people delivering care.

The Virtual Dental Home Demonstration Project “really changes the idea of what the dental team and the dental practice is — from being confined to the four walls of a dental office to now having a team that can be spread out,” said Dr. Paul Glassman, a dentist at the University of the Pacific in San Francisco, who started the program.

A bill pending before the state Legislature would expand the Virtual Dental Home approach statewide and require Medi-Cal, the government health insurance program for the poor and disabled, to pay for procedures facilitated by the Internet.

The bill, AB 1174, passed unanimously in the Assembly. It is expected to come up for vote in the state Senate later this year and enjoys wide bipartisan support. Expanding the program statewide would increase costs minimally in the short-term — by upward of $500,000 a year, according to a State Assembly’s Appropriations Committee fiscal analysis. If teledentistry takes off, the costs could be higher.

Advocates think the return on that investment could be substantial. For every dollar spent in preventive services like the ones provided through the Virtual Dental Home demonstration project an estimated $50 is saved on more expensive, complicated procedures, said Dr. James Stephens, a Palo Alto dentist and president of the California Dental Association.

“It’s a no brainer,” he said. “We should spend more money on prevention.”

The association, which represents 25,000 dentists, is generally behind the proposed California law because it gives people access to dental care who wouldn’t have a way to get it otherwise. The organization is working with legislators to assure it benefits the public as much as possible and is fiscally sustainable, Stephens said.

Dr. Burton Edelstein, a professor at Columbia University and the founding president of the Children’s Dental Health Project, a Washington, D.C.-based advocacy organization, said “quality of care can be just as good or even better” in teledentistry if the benefits of better access are factored in.

Some dental organizations around the country have spoken out against letting hygienists, assistants and other mid-level providers do procedures typically reserved for dentists. In Maine, for example, dentists have fought a bill creating a special category of provider called dental therapists – who would perform some of the duties of hygienists and some of dentists, such as filling cavities. Dental therapists already practice in Minnesota and Alaska.

“It’s a crisis of financing, not a crisis of providers,” Dr. Jonathan Shenkin, an Augusta dentist and representative of the Maine Dental Association told the Portland Press Herald.  “If people can’t afford a dentist, they’re not going to be able to afford a dental therapist.”

In California and elsewhere, the teledentistry effort has been made more feasible in part because equipment and devices are smaller, more portable and less expensive than before. Also, Obamacare has provided a boost with its emphasis on digital technology to improve care and reduce costs. 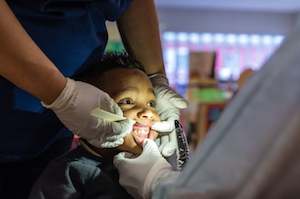 Out in the field, what matters is a gentle touch with patients — especially those who have never been to a dentist before or have had frightening experiences in the past.

When Rodriguez examines children at Head Start — government-funded pre-schools — she usually brings them up to her work station in pairs. Meanwhile, their friends are singing and playing with each other and the teachers in the background. It’s a fundamentally different experience than going to an office.

“These kids are getting something that reframes their connection to dentistry,” said Terry Press-Dawson, the grant coordinator for several schools in Sacramento, some of which are participating in the Virtual Dental Home project. “They are connecting dentistry with something that is not scary — and that’s huge.”

After spending weeks coaxing Hendryk Vaquero, the 4-year-old with serious dental problems, into an examination, hygienist Rodriguez was patient and respectful. She asked his permission as she took pictures of his teeth with a camera connected to a laptop and put fluoride on his teeth with a tiny disposable brush. She told him she was proud of him and complimented him on his shoes and Buzz Lightyear T-shirt.

And at the end of the exam, she gave him a baggie with a toothbrush, toothpaste, mouthwash and a two-minute timer so he could take care of his teeth at home with his mom’s help.

All the while, 5–year-old Abigail Velasquez was watching. She was up next. She said she’d never been to the dentist.

“We’re going to talk to mom so maybe mom can take you to a dentist when you’re done seeing us. Because it’s very important that you experience that,” she told her. “Going to the dentist is quite an adventure.”

When Connecting With A Dentist Doesn’t Mean An Office Visit